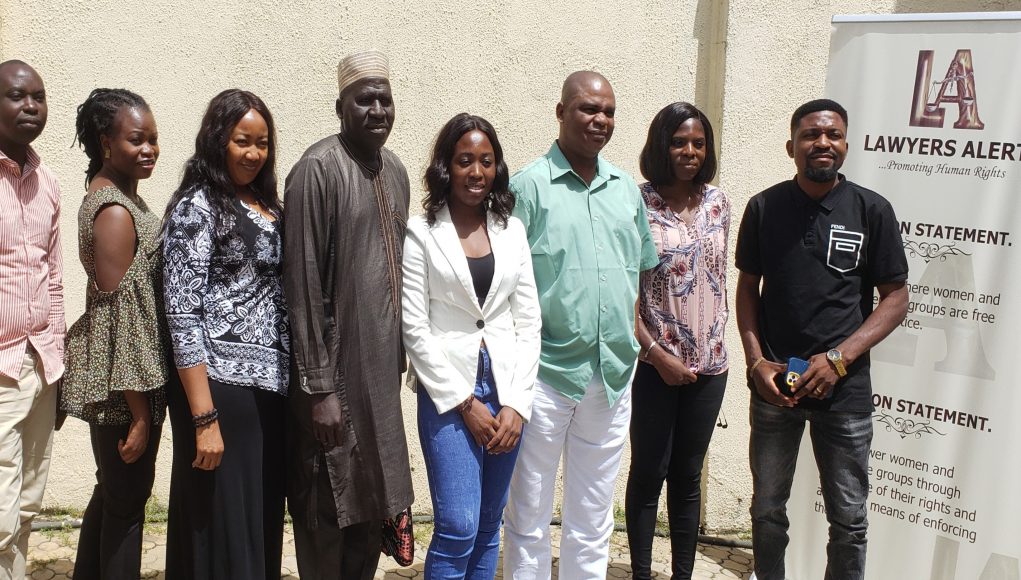 Like the impactful and life changing various programmes produced by the formidable collaboration between the International Labour Organization (ILO) and labour centres in Nigeria (NLC and TUC) to the benefit of workers (migrant and non-migrants) in Nigeria and by extension Africa at large, the Lawyers Alert SOS USSD code, recently launched to bring succor to victims of Sexual and Gender-Based Violence, appears to be a revolutionary approach.

Targeting boost to the fight against the terrifying rampant cases of Sexual and Gender-Based Violence (SGBV)  in workplaces, homes, markets and in the society and also give a helping hand to the victims of the menace, a humanitarian group, Lawyers Alert over the weekend, launched a USSD (Unstructured Supplementary Service Data) code; *7006*24#, to improve access to Sexual and Reproductive Health and Rights (SRHR) information and services for women and vulnerable groups in Nigeria.

Lawyers Alert Director of Programmes, Roseline Oghenebrume who spoke at the launch in Abuja, noted that engagement with various vulnerable groups had revealed that survivors in rural areas found it difficult to seek external help due to either lack of internet connection, transportation fare, data or mobile airtime.

She further explain that the project which is at its pilot phase, is kickstarting with five States; Bauchi, Osun, Enugu, Kano and Benue State. She said that anyone in danger of sexual and gender based abuse should simply type *7006*24# on both a smart phone or non internet based phone to seek instant help for free. She also hinted that the service assures safety and confidentiality of every information transmitted by the users.

“Anyone in the bedroom, farms, corporate settings etc can use these USSD codes. It brings down the wall of non-accessible assistance by victims of sexual and gender based violence. It brings services and information to the doorstep of victims at no cost whatsoever. Victims do not need credit, airtime or phone data to access this.

“The USSD will bridge the gap between service providers and women by providing information on their right and nearby services such as psychosocial support centres, shelters, health facilities legal support etc. It will address information gaps without internet connectivity acting as a potential barrier. It will aid speedy service delivery because findings have revealed that often, perpetrators of SGBV live under the same roof as the victims.”

“The USSD codes will be invaluable regarding SGBV interventions both at policy and non-governmental levels, being posted in an informed and coordinated manner. We are equally confident that the USSD codes will hopefully create a ripple effect on other Nigerian states and West Africa.” She added.

Legal/Program Officer Lawyers Alert, Solumtochukwu Ozobulu, explained that the choice of the five states was based on locations where situations such as conflict and displacement were pushing women and girls to be more disadvantaged.

She also said the pilot phase was aimed at weighing how the code could serve women and girls in danger of abuse, and added that plans wee already underway to escalate the intervention to other states and bring more local government areas on board.

“We are aiming at using this code to serve women and girls specifically victims of SGBV. Lawyers Alert is all about proffering solutions to issues of human rights etc. So we are already working with other partners to see how the services provided by this code can be extended to other States, especially in the rural areas and how women and girls can access the services we provide in collaboration with our partners through this code.

“During the conception of this project, we have partners in different States who were sent to map service providers. So we already have service providers who will provide health services, psychosocial services, shelter and legal services. These four services are integrated in the code. So when you use the USSD code and you click the option of service, you will see the four services being provided by the project, that is; health, shelter, psychosocial and legal services. If you for example click shelter, it will bring out all the place we have shelter provision in that State. In a situation where someone is confuse or unable to utilize the information session provided in the code, there is a toll free line that the person can call and Lawyers Alert will answer and direct the person.” Her, words.

Team Lead, Ikra Foundation for Women and Youth Development in Bauchi State, Amina Garuba, said the USSD code would serve the vulnerable at the grassroots better saying, ” they will be able to access services which they were not able to access before now. We look forward to giving our best to survivors of SGBV in Bauchi State.”