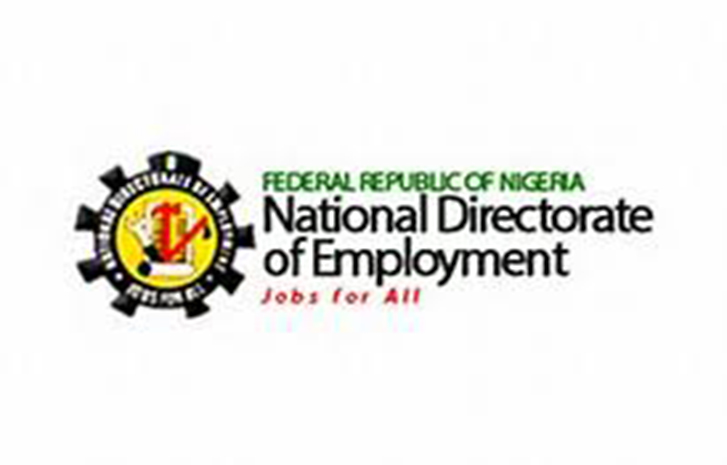 In a bid to provide sustainable employment opportunities to the teeming unemployed Nigerians, the National Directorate of Employment (NDE), an agency of the Federal government which was established in 1986 to wrestle the menace unemployment and underemployment, seem to have doubled its efforts in tackling the challenge.

Specially in create self employment opportunities, NDE has evidently empowered the unemployed citizens in different entrepreneurship skills especially in the area of farming, animal husbandry, autonomics, welding and several others.

Conducting evaluation of its job creation schemes In Edo State, NDE told journalists that thousands of people have benefited from the activities of the NDE and that as at today, not less than 18 of its  entrepreneurship programmes are scattered across the three senatorial districts of the state.

During inspection of the entrepreneurship centres in Edo State, journalists were conducted area to witness different groups of beneficiaries who are into catering, poultry farmers, fashion designers, beauticians, producers of soap, body creams and others businesses. The beneficiaries when interviewed, expressed satisfaction with the efforts of the Agency in reshaping their lives and their dependents.

Mrs Kate Iruero is a caterer around Ewah Road near New Benin area of Benin City who is into snacks production, cooked food vendor, outdoor and indoor services. She said she was trained more than 20 years ago by NDE and today, she helps NDE to train applicants recommended to her from NDE and she currently has 35 students learning the trade from her and most of them from the Directorate.

In Uselu, Nwobu Mercy Ayodele said her garment production venture is today worth about N20 million from the start-up of N400,000 given to her by the NDE under its Start Your Own Business (SYOB) scheme.

She said several women through her Creative Women Association of Nigeria have benefited from her relationship with the NDE but however want more support to enhance putting finishing touches to the garments and clothes she produces]. Her success story has made her represent NDE at the Enugu International Trade Fair.

She said “Though I need more support from NDE but I don’t think I will be what I am today without NDE, they gave me the leverage that took me to where I am today. NDE gave me N400,000 under its SYOB in 2012 and by the grace of God, today, my business is worth about N20 million and I have trained over 100 persons. They empowered me after my shop was burgled.

“Even the shoes I sell here are made by NDE trainees in Kaduna State and I have had patronage from the wife of the state governor, Mrs Betsy Obaseki, wife of the Speaker and many others in the past and present.

“The major challenge I have now is my inability to purchase a monographic machine which I need to fix stones in the fabrics I make so for now, I take them to Lagos.

In Ugbigboko Quarters, Upper Ekenwan Area of Benin City, there is Ehimax Trading Enterprise which is into cosmetics producing body creams, solid and liquid soap, olive oil, shampoo and other products.

The Chief Executive Officer of the company, Comrade Maxwell Iyamu said “It was like a child’s play unknown to me that God was using NDE to move me. I was trained by NDE and today I train for NDE. I have 18 products under our company’s name and now we are even going into agriculture poultry to be precise. I have had patronage from all strata of the society because politicians have also engaged us to train members of their constituents. My wife was first trained in the church and I discovered that in a matter of days, my wife was producing what she was being taught, that was how I became interested and today like they say, the rest is history. NDE later trained us including returnees from Libya and intended illegal immigrants.

“We started with a N250,000 facility from NDE in 2015 which we have since paid back and today we are worth about N15 million. We have trained people from Delta state, from Junior Chambers International (JCI). Today, I am expecting a loan from the Bank of Industry and we qualified for that after going through their rigorous processes. I will not talk about my business today without NDE because it is the source of what we are doing today, we appreciate it.”

On challenges he said “The major challenge we are having today is access to raw materials because of some of them are adulterated and expensive by the time we get from third parties because we have more money, we can get directly from the sources in Lagos and Ibadan and one is sure of their originality.”

At the St. Joseph Catholic Church, the NDE has a cluster of poultry farmers who have been undergoing training on the rudiments of poultry farming and they all testified to genuine efforts of the Directorate.

At the Youth House in Akpakpava, Benin City, NDE is operating three sections which are computer training, fashion and catering.

The computer section has two phases of training which are the basic that teaches new entrants on how to type, and master the keyboard then Microsoft word, Microsoft excel, powerpoint and graphics and this takes six months while the second phase is the advanced stage that covers web design, advance graphics, computer engineering, networking and others.The instructor, Mrs Christy Eghabor said each phase of the training lasts for six months.

At the catering section, the instructor, Mrs Blessing Ordu said she was trained by the NDE in 1998/1999 and since then she has been helping NDE to train its students majorly on African and Continental dishes including cake making and moral education.

Speaking on the activities of the Directorate, the State Director of NDE, Mr. Edobor Solomon Chukwuka said “Our activities are fine, you have the opportunity of having first hand information, unbiased information about what you saw. Without mincing words, NDE under the leadership of Mallam Abubakar Nuhu Fikpo is trying and he has made everything possible for us to make sure we carry out our assignments diligently and in Edo state, we have tried to make sure we impart the skills acquisition to all and sundry without being politically biased. Whether you are from Edo, you are PDP or APC, as long as you are ready and you have the interest to learn a skill we will make sure you are enlisted. Many of our outlets are doing perfectly well in terms of imparting skills and also those who are in production are producing products that are marketable and also comparable with any products from any other country.”

On the some of the challenges like irregular light at the NDE/Oredo Skill Acquisition Centre, he said “The issue of light, it is a general problem but it is important to state here that we have a 50kv generator to service here the only issue that may arise is buying diesel regularly and I am sure you know the cost of diesel as at today for us to power this we need about 30 to 40 litres of diesel in a week. What we intend doing is that we are looking at how we can bring a smaller generator that will power this place regularly and for the machines, we will make requisition immediately to the headquarters to bring new machines and service the older ones. It is a learning institution; they must not start with sophisticated machines.”