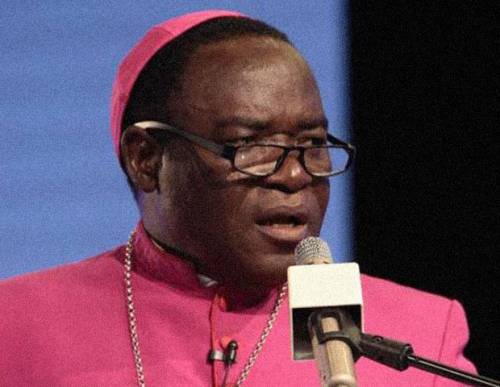 The Catholic Bishop of Sokoto Diocese, Mathew Kukah, has accussed President Muhammadu Buhari of destroying every sector of the country and dividing the citizens along ethnic and religions lines in a manner never witnessed in the country’s history.

Bishop Kukah in an Easter Message on Sunday, noted that the only thing alive in Nigeria under the present administration was corruption, adding that Nigeria “still totters and wobbles as we screech towards a dangerous and avoidable canyon of dry bones.”

The Cleric who further lamented that Nigerians could no longer recognise their country which has been “battered and buffeted by men and women from the dark womb of time,” noted that the government has slid into hibernation mode.

He said: “It is hard to know whether the problem is that those in power do not hear, see, feel, know, or just don’t care. Either way, from this crossroad, we must make a choice, to go forward, turn left or right or return home. None of these choices are easy, yet, guided by the light of the risen Christ, we can reclaim our country from its impending slide to anarchy.

“The greatest challenge for Nigeria is not even the 2023 elections. It is the prospects for the reconciliation of our people. Here, the Buhari administration sadly has divided our people on the basis of ethnicity, religion, and region, in a way that we have never witnessed in our history.

“This carefully choreographed agenda has made Nigerians vulnerable and ignited the most divisive form of identity consciousness among our people. Years of friendships, cultural exchange, and collaboration built over time have now come under serious pressure from stereotyping. Notwithstanding these challenges, religious leaders must recover and deploy their moral authority and avoid falling victim to the schemes of politicians and their material enticements.

Bishop Kukah also criticised President Buhari’s focus on rehabilitating and reintegrating presumed repentant terrorists rather than working towards ensuring those kidnapped were released from the hands of their abductors.

“We need to start thinking of a Nigeria beyond banditry and kidnapping and the endless circles of violence that have engulfed our communities and nation. We cannot continue to pretend that there are no religious undertones to the violence in the name of God that has given our religions a bad name. The way out is for the state to enforce the secular status of the Nigerian state so as to give citizens the necessary freedoms from the shackles of semi-feudal confusion over the status of religion and the state in a plural Democracy.

“We must be ready to embrace modernity and work out how to preserve our religions and cultures without turning religion into a tool for tyranny, exclusion, and oppression.

“In finding our way forward, the President must concede that it is within his powers to decide how we are going to end the war that has engulfed and is tearing down our nation. It seems that the federal government has shown far greater commitment to integrating so called repentant terrorists than getting our children back from kidnappers or keeping our universities open. Earlier last month, Operation Safe Corridor announced that it had graduated 599 members of various terrorist groups who have acquired new skills and are now ready to be integrated into society. The total comes to over a  thousand now.

“Nigerians have no access to the transcripts of the texts of the confessions of these terrorists not to talk of evidence of their commitment to not sin again. We have only the words of the terrorists and the same military that they have been fighting a war with. It speaks volumes when the President and his military hierarchy choose to believe these young men who took up arms and for years waged war against their country, killed, maimed and wasted thousands of lives, destroyed entire communities and now, they are being housed, fed, clothed with public funds.

“All this while their victims have been forced to make the various IDP camps their new homes! Where is the justice for the victims and the rest of the country they have destroyed?

“As a priest, I cannot be against a repentant sinner or criminals changing their ways. After all, the doors of forgiveness must always remain open. However, in this case, Nigerians have very little information as to the entire rehabilitation processes. Have these terrorists felt the heat or have they seen the light or, is their repentance a mere strategic and tactical repositioning?

“So far, we have no evidence that these terrorists have been able to confront their victims not to talk of seeking forgiveness from them. Something is wrong. We see these terrorists adorned in our national colours in their green and white kaftans, trousers, and looking like heroes of the state! Are we to assume that they have become acknowledged models for Nigerian youth? Perhaps the next graduating set might be treated to Presidential handshakes, receptions at the villa with full national colours!”

The Cleric admonished Christian leaders to focus on beginning the process of reconstructing the country rather than worry about surviving the 2023 general elections.

“The real challenge before us now is to look beyond politics and face the challenge of forming character and faith in our country. Here, leaders of religion, Christianity and Islam, need to truthfully face the role of religion in the survival of our country. The Nigerian Constitution has very clearly delineated the fine boundaries between religion and politics. Yet many politicians continue to behave as if they are presiding over both the political and the spiritual realms in their states rather than governing in a Democracy.

“This conflict between Caesar and God is inbuilt in faith and is part of world history. Many religious leaders often measure their power by how close they are to Caesar, yet Caesar’s embrace is often full of thorns. The challenge is for the religious leader to know that both Caesar and those he represents are answerable to God who created them. The welfare of citizens constitutes the cornerstone for measuring the legitimacy of any political leader.

“As such, religious leaders must focus more on the issues of welfare, safety and security of ordinary citizens. They must raise their voice when these rights are being trampled upon. A leader must know when to call Caesar a fox and not a horse.

While insisting that the office of the President of Nigeria was not a human right based on ethnic, religious or regional sentiments, he advised Nigerians to ensure the next President has a heart, a sense of empathy and a soul on fire that can set limits to what he or she can tolerate.

“We have no need for any further empty messianic rhetoric laced with deceitful and grandiose religiousity. We need someone who can fix our broken nation, rid our people of the looming dangers of hunger and destitution.

“Our Presidential aspirants must show evidence from their legacies and antecedents that they know the country well enough and its severe wounds. Whoever wants to govern us must illustrate that he or she understands what has turned our nation into a national hospital and show us plans for our discharge from this horror.”