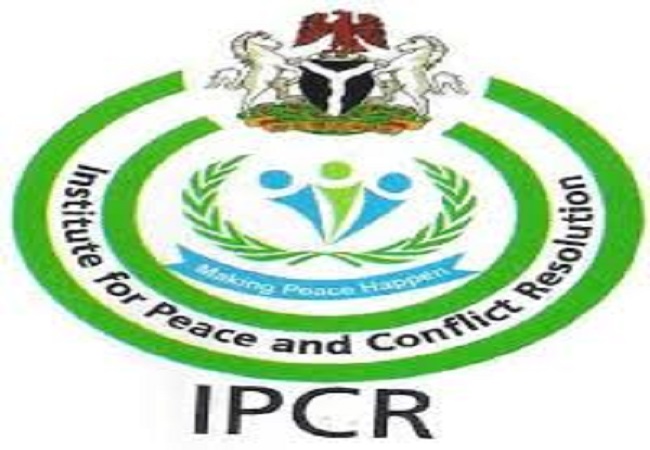 The Director General of Institute for Peace and Conflict Resolution (IPCR), Dr. Bakut Bakut, has said that to achieve sustainable peace, security and development in any community, the people must be integrated at the conception, implementation, monitoring and reporting stages.

Speaking at the national policy roundtable on policymakers to support IPCR on reconciliation, peace, security and development in Nigeria, held at the Institute on Monday, Dr. Bakut recalled that since the end of the Cold War era in the 1990s, the issues of reconciliation, peace, security and development have gradually shifted away from a strict state or government affairs to more involvement, inclusion and participation of the people.

The DG noted that the state-centred conceptions of peace, security and development have not met the requirements needed largely because it is alien to the people and always imposed on them by external agencies of the state or international body.

He said: “It would be recalled that one of the unpalatable characters of a strictly state-
driven peace, security and development initiative is its repressive nature before, which has been identified in most of the field studies by the Institute including the Strategic Conflict Assessment of Nigeria.

“This approach is not only rejected
by the people because it is external to them, but also because the agencies for its application have not demonstrated empathy, compassion, love, kindness, gentleness, and tolerance in its approach.

“Indeed, the country still grapples with the sad memories of some of the violent approaches of conflict management and how it has deepened the gulf between the state and the citizens because the agencies of the state dealt with the communities involved with little regards, this is not in any way to encourage evolvement of a weak and handicap state that cannot effectively perform her responsibilities to the international community and the citizens, but one that is people-driven.”

The shift in approach, according to him, has been by the 1994 United Nations Human Development Report that called for new thinking of security by calling on member states to the nature of security that affects the people – 1. Economic Security, ii. Food Security, iii. Health Security, iv. Environmental Security, v. Personal Security, vi. Community Security, vii. Political Security.

“The main target of this shift is to achieve three key fundamentals, which are freedom from fear, freedom from want, and the attainment of human dignity. This thinking has been applied by the African Union (AU) and the Economic Community of West African States (ECOWAS).

“The African Union September 2015 document with the title: AGENDA 2063: The Africa We Want A Shared Strategic Framework for inclusive Growth and Sustainable Development (First Ten-Year
Implementation Plan – 2014 – 2023) is a template for an integrated, prosperous and peaceful Africa, driven by its own citizens, representing a dynamic force in the international arena. Similarly, the ECOWAS Vision 2020 is for the transformation of the sub-regional body into an ‘ECOWAS of Peoples’.

He pointed out that at the middle of these engagements and conceptions is Nigeria, disclosing that it is in light of the foregoing that the IPCR received the approval of the Honorable Minister of Foreign Affairs to collaborate with the King Abdullah Bin Abdulaziz International Centre for Interreligious and Intercultural Dialogue (KAICIID) to facilitate the formation of a Network of Policymakers to Support Reconciliation, Peace, Security and Development in Nigeria.

“To achieve this, the Institute conducted a National Survey with the aim of updating its knowledge on the dynamics of religion, policy, violent conflicts, peace, security and development,” he said.

Also speaking at the occasion, the Minister of Foreign Affairs, Geoffrey Onyema lamented the global dimension insecurity is taken, noting that the manipulation of religion has resulted in so many conflicts.

He also noted that religion has helped to cement relationship between countries, stressing that Nigeria had struck a bilateral relation with the countries it engages in pilgrimage like Israel and Saudi Arabia.

The Chief Justice of Nigeria (CJN), Ibrahim Tanko Mohammed, while speaking said that the strategic program couldn’t have come at a better time, adding that all hands must be on deck as peace “is something we must cherish at all time.”

The Minister of Women Affairs, Pauline Tallen shared the pains of a mother in the insecurity ravaging the nation.

She said that peace is a business of everybody in Nigeria, adding that “without peace we can’t achieve anything.”

She observed that in public discuss on insecurity, women are mostly not carried along, adding, “we cannot effectively discuss issue affecting the nation without involving a number of women in that dialogue. When women are involved, we get a better result. We cannot continue to do same thing over and over again and expect better result.”

Suggesting the way forward on how to achieve peace in the country, Tallen said, “love is what we need. If we truly love God and our country, we will not raise hand against one another. Our problem in this country is absence of love.

“We need to change our strategy, the blood of innocents are cry everyday. We must be sincere to implement every resolution at every discussion. We must go back to the draw board and re-strategize. We have to be sincere to nip in the board the insecurity.”

The Inspector General of the Police, Usman Alkali Baba on his part said any society that seek peace must pay attention to peace building.

He also noted the role of religion and community leader in peace building.

While many religion leaders witnessed the event, National Security Adviser (NSA) Secretary to the Government of the Federation and Minister of Defence sent their representatives.