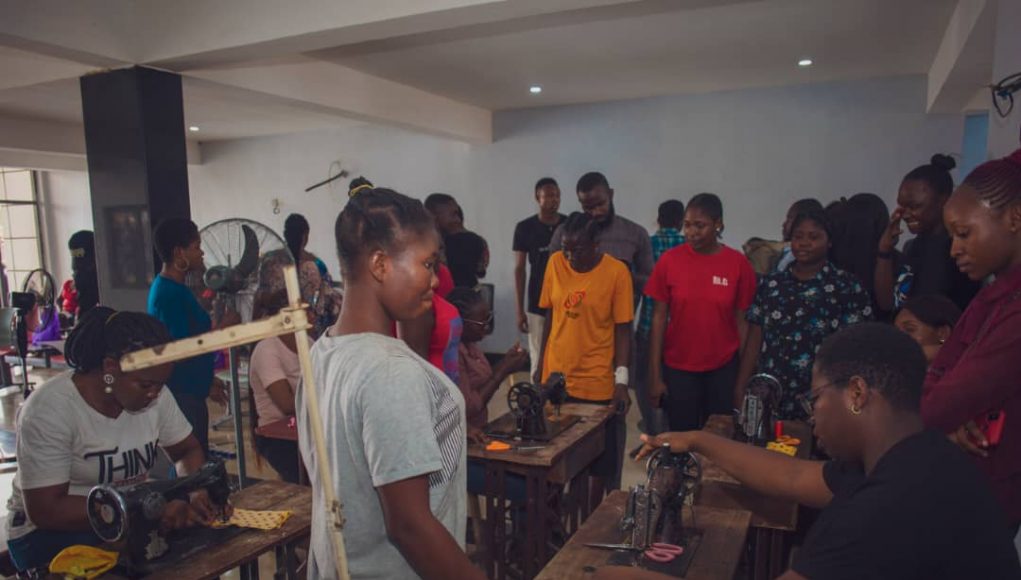 Julius Atorough Foundation (JAF), recently beamed its spot light on vulnerable women and girls struggling to eke a living in the North Central, with more emphasis on Benue State . REGINA OTOKPA reports on the Foundation’s skills acquisition intervention, aimed at assisting the female gender become self reliant, take ownership of their futures.

March 8 is an inclusive, diverse and eclectic date worldwide. It is the International Women’s Day (IWD); a day devoted to give women a greater voice to further their demands for equal rights in all its forms. A day to acknowledge, celebrate and appreciate the social, cultural, economic and political achievement of women.

However, it is also a day to truly press for progress to make a positive difference for women, a gender systematically left behind and forced to endure various forms of discrimination and inequality world over.

This year’s theme, ‘Gender equaliy today for a sustainable tomorrow,’ reflects the urgent need to break the bias and have more women inclusion in every aspect of society, give them a voice to express what they truly stand for but most importantly, assisting the poorest and most vulnerable women and girls to acquire the skills they need to get good jobs, build successful careers and have a choice over their futures

Although this year’s IWD celebration has come and gone, the clamour for Women’s right globally, is a continuous journey despite the hiccups witnessed in different climes.

In Nigeria for instance, the National Assembly struck out all Bills relating to women, with a view to relegating women to the background. Sadly, this may not augur well for the future of women and girls’ rights as presently, about 57 percent of women feel unable to support themselves compared to 47 percent of men due factors including poverty, marginalisation, poor girl child education, and poor awareness on the rights of women.

To change the narrative for women and girls in Benue State, Julius Atorough Foundation (JAF) has shown renewed commitment towards assisting the female gender harness their potentials in order to rise above poverty and  become better versions of the.selves.

Even though JAF has embarked on several empowerment programmes within the last 15 years, the Foundation aligned with the 2022 IWD celebration to begin a free three months skills acquisition programme with the objective of building and rebranding women and girls in the state with a capacity to make informed decisions capable of evoking a sustainable change wherever they find themselves.

This new initiative expected to run at least every three months, is outside the over N300million so far spent on various philanthropic gestures including provision of over 50 educational facilities, scores of teaching and learning materials, WAEC/JAMB scholarships for students, medical assistance/outreaches and many other social development and humanitarian services.

For instance, JAF has assisted about 43 graduates, over 500 underprivileged students in primary and secondary schools, catered for thousands of widows, orphans and the elderly within the last ten years directly and in partnership with organisations such as Sociery of the Catholic Church (SSVP), sponsored thousands of small and medium scale businesses, assited hundreds of prisoners and people awaiting trial regain freedom and become useful to society, and provided several interventions to thousands of Internally Displaced Persons (IDPs), especially in Benue State.

Determined to build more female entrepreneurs,  JAF Trustee, Mrs. Victoria Iveren Atorough, maintained that women must be taken more seriously not based on gender alone, but on  “our capabilities, contributions, enterprise, residence as homemakers  world leaders CEOs and even much more.

“I had just moved here from Abuja and having recently gotten married, I thought I should introduce another angle to my husband’s Nongovernmental Organisation which he has ran for about two decades, and have it focus more on women as men had benefitted the most. The IWD was approaching and I knew it was time to do something to celebrate women.”

According to her, the project which kickstarted with unemployed graduates desiring to become fashion designers, would engage many more skills segments including makeup, catering/culinary, and also widen its scope to accommodate women and girls who were not fortunate to acquire any form of education.

“Sometimes skills becomes a life saver as opposed to getting a degree and looking for a job  so there will be something in the works for women who did not receive any form of education and those who dropped out of school. This will provide them the opportunity to express their skills.

“Three months is enough time to learn the basics, to pick up a skill if you are dedicated. At the end of each training session, we hope to fully empower those who have shown genuine seriousness.

“It is in our power to change stereotyped social norms and prejudices  that prevent today’s girls from improving themselves in all aspects of life, education, arts and science and from turning into tomorrow’s powerful and influential women. In order to make the change we need, it is of great significance that we discuss the issues concerning the realization of full and equal rights for girls and continue launching projects to attract public attention, raise due awareness to support tomorrow’s successful women.

“My husband, Julius Atorough, knows first hand,  the issues women are faced with around here and I being partial to the women folk,  he has promised that women will be less vulnerable, have the requisite power and be placed in positions of power that will enable them break away from the ills women face in society under his administration as Governor of Benue State.

Commenting on the 2022 IWD, Mrs. Atorough
emphasised  the need to educate, motivate and empower girls to become confident women who make positive contributions and changes to their immediate environment and globally.

“IWD highlights the ill, bias, injustices women and girls face in society. It is a day to proffer solutions physically, mentally  socially, culturally and politically. We have progressively challenged status quo because we believe only a challenged world evokes change.

“We must lend our voices and hands to see that women and girls live in a world where their voices are not silenced but amplified, a world where we do not only have to dream.but actually  live those dreams. It takes a collective effort to make this a reality and I am all in.”

President of JAF, Hon Julius Atorough, maintained that one major requisite to having a strong society is simply by unleashing the power of women. “This is only possible when laws and national goals are in harmony; societies, governments, national and international institutions, and individuals work together.”

Accrediting his successes to the sacrifices of his late mother, Mrs Victoria Atorough, JAF president  who is presently a Gubernatorial aspirant under the flagship of the People’s Democratic Party (PDP) in Benue State, pledged to expand and sustain his support to help women and girls achieve their goals and aspirations in becoming better versions of themselves, evoke positive change in society.