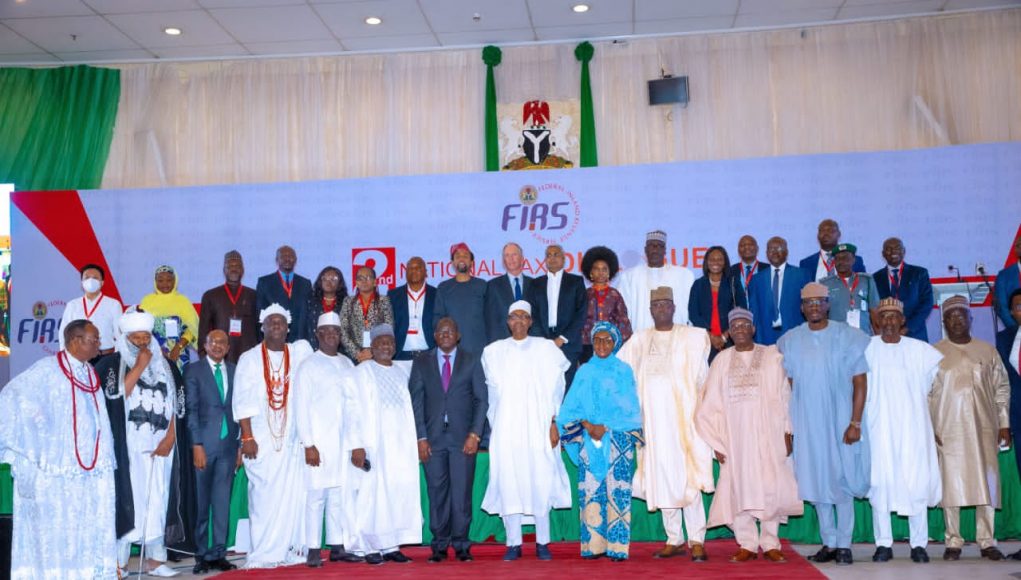 President Muhammadu Buhari on Tuesday in Abuja expressed his administration’s commitment to an efficient tax administration in order to improve tax revenue in the country.

”In most tax-efficient nations, tax administrative processes and practices are harmonised within a single system.

”One key deliverable of this year’s tax dialogue is to promote synergy in tax administration among the different tiers of government.

”Harmonising taxpayer identification across the country is a good start; but we must do more to promote ease of doing business (including ease of tax compliance) in Nigeria.

”On our part, we have started by clarifying in the 2021 Finance Act that FIRS is the sole authority to administer tax for the Federal Government.

”This clarification became necessary in order to avoid taxpayers being burdened with multiple tax compliance obligations towards different agencies of the same government.

”Multiplicity of tax administration is as undesirable as multiplicity of taxes; it creates uncertainty and instability; and above all, it is inefficient,” the President said at the Dialogue themed ”Tax Harmonisation for Enhanced Revenue Generation.’’

In the face of dwindling revenues from commodities, President Buhari told participants at the Tax Dialogue that there is an urgent need to maximise domestic revenue within the extant tax policy and laws.

He, therefore, proposed improved tax revenue for the country which will not necessarily impose new tax rates on Nigerians.

”We all know that good intentions are not enough as they simply cannot pay for infrastructure, security or social amenities. We must therefore improve tax revenue without necessarily raising new taxes.

”Revenue from commodities, including crude oil, are too volatile and unreliable. Therefore, I pledge government’s support for any viable initiative for improving tax revenue that should emanate from this dialogue,’’ he said.

On Nigeria’s Tax-to-GDP ratio, the President declared that the country also needs to do more in securing a buoyant domestic revenue base of the country that bequeaths an enduring economic foundation, political stability and social harmony to the next generation.

”According to the Organisation of Economic Cooperation and Development (OECD), in its Revenue Statistics in Africa 2021, the average ratio of Tax-to-GDP of 30 selected African countries in 2019 was 16.6% while Nigeria recorded a mere 6.0%.

”It is obvious that much needs to be done in the area of tax revenue mobilisation.

”It is my expectation that the discussions at this 2022 National Tax Dialogue will be focused on what we must do to maximise legitimate revenue collection and massively improve the Tax-to-GDP ratio. ”

On the importance of the Tax Dialogue, which was instituted by the Minister of Finance, Budget and National Planning, and the Executive Chairman, Federal Inland Revenue Service (FIRS), President Buhari noted that the first edition in 2021 was very productive and integral in influencing tax policy, as well as legislative and administrative changes that were introduced last year.

He added that the most important testament to the success of the first edition is the fact that the FIRS achieved 100% of its collection target in 2021 and surpassed N6 trillion revenue threshold for the very first time.

Congratulating FIRS on the achievement, the President assured Nigerians that the present administration would continue ”to maintain prudent management of our collective resources.”

In her remarks, the Minister of Finance, Budget and National Planning, Zainab Ahmed said the dialogue was designed to engage stakeholders in the Nigerian tax-space in meaningful discourse so as to glean information, ideas and experience in the aid of policy formulation and improved tax environment.

According to the minister, the main tax revenue objectives of the Federal Government include developing an economy that does not lean too heavily on resource wealth.

The other tax revenue objectives are:

”To institutionalise a healthy tax culture among Nigerians. The right attitude towards taxation will enable every Nigerian to become a co-guardian of the tax system and the commonwealth.

”To create a participatory system of taxation whereby the taxpayers and other stakeholders understand and accept that they have equal stakes in the tax system.”

The Chairman FIRS, Muhammad Nani, thanked the President for his directive to government agencies to enable FIRS connect to their ICT systems; noting that this singular pronouncement softened the grounds for the Service to roll-out its system for seamless acquisition of data.

”We are confident that by the time all the agencies achieve 100% compliance with the President’s directive, Nigeria shall be the envy of other countries for tax compliance and domestic tax revenue mobilization,” he said.

On the remittances of the Service to the Federation Account, the FIRS Chairman announced that h statistics from March 2022 Federation Account Allocation Committee (FAAC) meeting show that out of a total revenue of N803.072 billion from all revenue agencies, tax revenue contributed by FIRS was N513.522 billion (63.94%) while non-tax revenue from all other agencies amounted to N289.55 billion (36.06%).

The Chairman noted that that the average tax or FIRS contribution to FAAC in 2021 was 59.45%.

”I mentioned in my welcome address to the 2021 edition of the Tax Dialogue that the world had begun a tax race of which Nigeria must be a winner.

”The revenue profile of the country in 2021 has clearly shown that our continued survival as a nation depends on tax revenue.

”This trend is set to continue for some time to come. As such, all hands must be on deck to support the tax system and make it function efficiently.

”However, it is surprising that some people have begun to play politics with tax revenue generation.

”We humbly invite the President to step-in to dissuade political tax gladiators to sheath their swords. Tax revenue is an inherently apolitical issue; it should be treated as such by all, irrespective of their political leaning, ” he said.