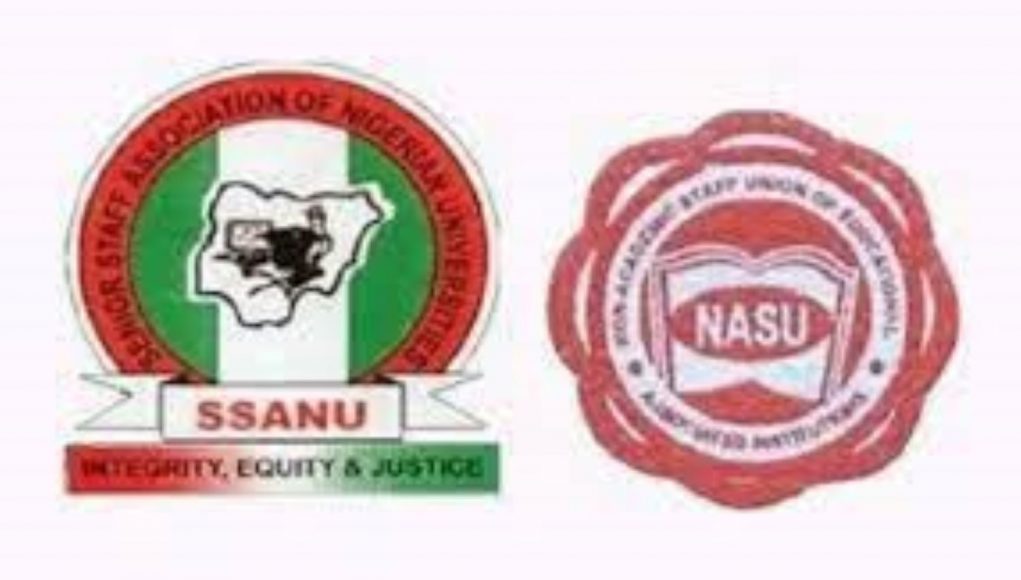 The Joint Action Committee of the Non-Academic Staff Union of Educational and Associated Institutions (NASU) and Senior Staff Association of Nigerian Universities (SSANU), have issued a strike notice alert that would totally shutdown academic activities across the country’s tertiary institutions.

The Unions however urged Federal government to urgently take immediate action to resolve and importantly meet its obligations as stated in the agreements reached with the unions.

Rising from a meeting held on Thursday 24 February, 2022, in Abuja, JAC in a statement jointly signed by Comrade Peters Adeyemi and Comrade Mohammed H. Ibrahim, the General Secretary of NASU and National President of SSANU, respectively, said; “we can no longer guarantee industrial peace In our university system. With this release. we place all Nigerians on red alert of the possibility of an industrial action by the non-teaching staff unions of NASU and SSANU, as we can no longer watch by as agreements freely entered Into by the Federal Government with the Unions are not respected.

“Having waited one whole year for the consummation of the Memorandum of Understanding and despite all peaceful entreaties, we wish to notify all stakeholders In the Nigerian Universities and Inter-Umversny Centres; and indeed all Nigerians of the possuble breakuown ot Industrial peace in the university system borne out of disrespect for Collective Bargaining Agreements reached wtth NASU end SSANU by Government”

Furthermore, the statement said; “JAC noted that the January 2021 industrial action was preceded by a Memorandum of Action In October 2020 which highlighted the following:  Inconsistencies in IPPIS Payment, Non-Payment of Earned Allowances, Delay in Renegotlation of FGN/NASU and SSANU Agreement, Non-Payment of Arrears of National Minimum Wage,Usurpation of Headshlp of Non-Teachlng Units in clear violation of Conditions of Servuce and Establishment Procedures, Neglect and Poor Funding of State Universmes, Non-Payment of Returement Benems to Outgomg Members Non~ConstItutuon of Vlsutatlon Panel to Universmes.

“We wish to make it public that till date, except for constitution of Visitation Panels which white papers are yet to see the light of the day, none of the issues as agreed in the October 2020 and February 2021 Memorandum of Action have been Implemented.

“The attendant problems of the Integrated Payment Personnel System (IPPIS) remains unabating as our members are still being paid salaries haphazardly. The untold suffering of our members due to the disorganized payment of salaries is further  compounded by the unpreductable remittance of Thlfd Party deductions Union Check Off Dues, Cooperative Societies. Welfare Schemes, Bank Loans among others.

“While we had agreed that a sum of thirty billion naira should be made available for the payment at arrears of Earned Allowance for the three non-teaching unions, we had an embarrassing situation where only 25% of a sum of Twenty-Two Billion Naira was paid to the non-teaching staff in a disbursement made in December 2021 , which has only caused further confusion and dissatisfaction in the University System.

“Till date, despite all entreaties. the arrears of National Minimum Wage being owed our members is yet to be paid.”