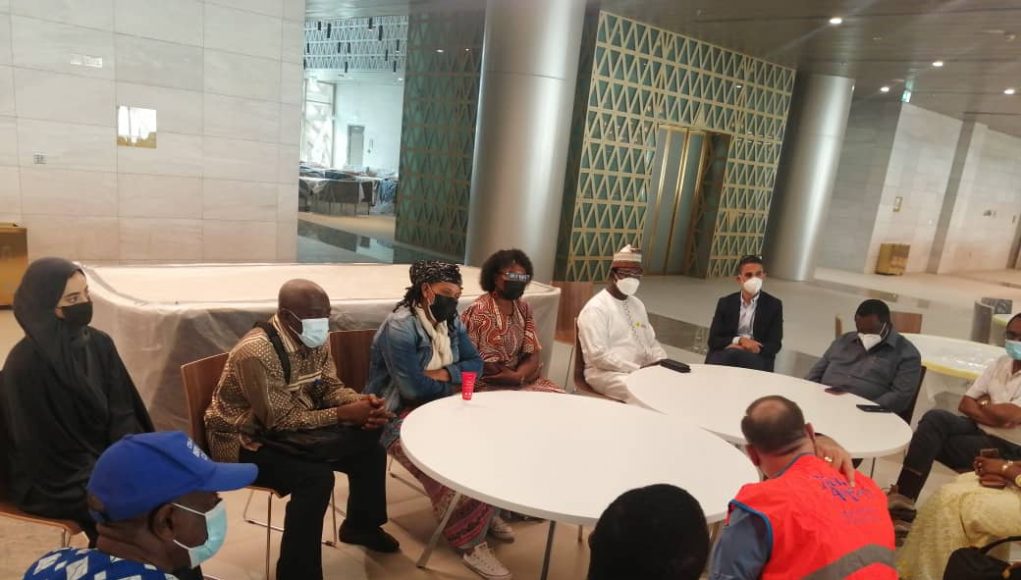 Hope for a better working conditions for migrant workers in Qatar, has continued to gain ground as the African Regional Organisation of the International Trade Union Confederation (ITUC-Africa) passes vote of confidence in the ongoing labour law reforms being carried out by the Qatari government that aims at catalysing fair recruitment practices.

While it noted there is room for improvement, ITUC-Africa commended the Qatari government for its firm commitment and promise to further facilitate Qatar and member-states of the African Union (AU) collaboration towards advancement of fair recruitment of more African migrants.

Stated in  press release signed by its Gerald Secretary, Kwasi Adu-Amankwah, and made available to journalists in Abuja, after the evaluation of the feed back  reports from its delegation who where in Doha the capital of Qatar for a collaborative working mission between 19 and 20 February, 2022, ITUC-Africa said; “The mission was a follow up to the commitment that the African Workers Group made during the 2021 Africa-Arab Labour Migration Webinar Conference hosted by the International Labour Organisation, to continue to explore ways to build cohesion and find means to improve fair recruitment and general labour migration governance.”

The statement further said; “Thus mission was undertaken as a way of building and enhancing social dialogue between the State of Qatar and the African trade union movement. It should be recalled that there is a significant and growing number of African migrants living and working in Qatar. Also, on the back of the FIFA World Cup slated to be hosted by the country later this year, migrant inflow to Qatar significantly increased.

“Still, on ensuring the protection of the human and labour rights of migrant workers, the InternationalTrade Union Confederation (ITUC) undertook a campaign to ensure that host nations of global sporting events adhere to standards and prescriptions. Thus, the ITUC and other Global Union Federations together with the International Labour Organisation (ILO) worked with the State of Qatar to reform its laws and practices.

“We have visited several places – work/construction sites, organisations and interacted with different categories of stakeholders involved in and connected to the reform processes such as ILO officials, Qatari officials (notably the Ministry and Minister of Labour, the Qatar Human Rights Committee and the Qatari Parliament (Shura Council) receiving the African workers’ delegation. The delegation also visited and interacted with migrant workers, especially those from Africa and obtained first hand information about their working conditions.

“Interestingly, we also visited the Afghanistan Refugee Centre set up by the State of Qatar to assist with the evacuation of Afghans, including workers and members of their families considered at risk with the fall of the former government in Kabul. We learned with appreciation that some 75, 000 Afghans and other nationals have been successfully evacuated and some are settled in their new homes. This action is a strong show of solidarity and pragmatic demonstration of Qatar’s commitment to our shared humanity.

“We are confident that the reforms are real and are being implemented, howbeit with some challenges, notably from employers and the established culture of many years. Already, Qatar has established several best practice initiatives such as the elimination of exit visas; freedom to change employers, which have led to the progressive reform of the Kafala sponsorship system; instituted a national minimum wage payment that includes accommodation and feeding and those who opt out of company accommodation and feeding provisions have the option of being paid in lieu.

“The reforms have also delivered improved health and safety requirements in construction sites and anywhere temperature exceeds a certain degree; signing of labour contracts in a designated location (Qatar Visa Centres) before migrant workers’ departure to avoid discrepancies upon arrival in Qatar, and the establishment of workers’ representative council.
“The challenges of implementation notwithstanding, it is heartwarming to note that the Qatari government has itself acknowledged that despite the remarkable results achieved, that there is still room for improvement as their efforts are work in progress! We find this disposition humbling and exemplary. We, therefore, call on all progress-hunters to stand ready and willing to support the Qatari State in their continuous efforts to improve.”