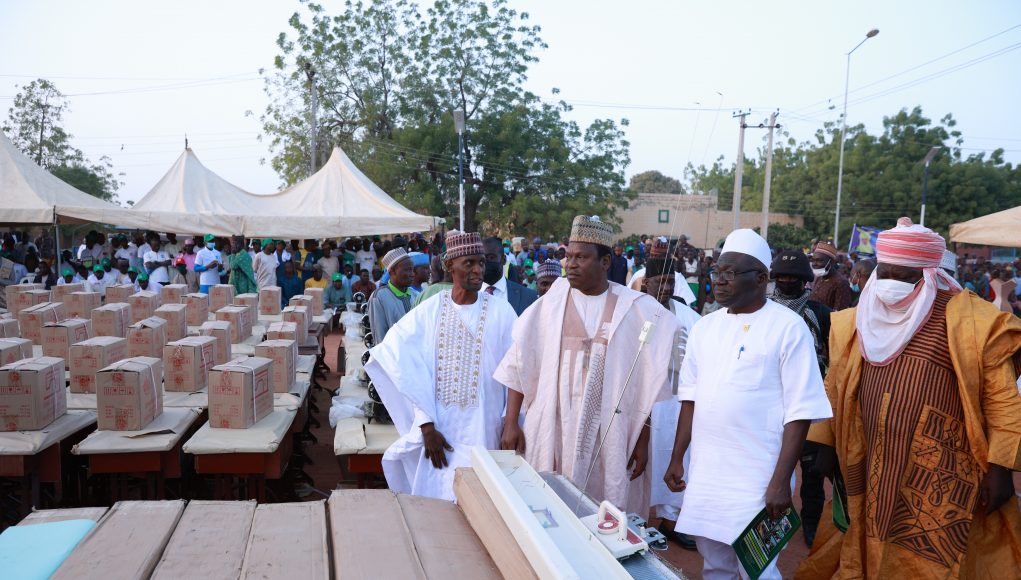 Poised to overcome the monstrous challenges of unemployment in Nigeria, the National Directorate of Employment (NDE) has kick-start a job creation driven empowerment for unemployed Nigerians comprising youths and women numbering one thousand in Daura, Katsina State.

The beneficiaries were recently trained in various skills aimed at making engaged in gainful economic activities and also job creators.

Tagged Resettlement, NDE in a press statement signed and made available to journalists in Abuja by its Deputy Director Press/ Public Relations, Mr Edmund Onwuliri, explained that the beneficiaries who were trained in different job driven skills, received their empowerment packs on Friday, 4 February, 2022.

Chaired by Katsina State Governor, Aminu Bello Masari, who was represented by the State’s Commissioner for Local Government and Chieftaincy Affairs, the event took place with the palace  of Emir of Daura, with many top government officials in attendance; the statement added.

Speaking at the event, the Minister of State for Labour and Employment who is also the supervising Minister of the NDE and Chairman of its board, Festus Kiyamo SAN,  said that the administration of President Mohammadu Buhari will do everything possible to arrest the unemployment situation in the country. He also reiterated his confidence in NDE’s ability to proliferate the country with job creation driven skills, he enjoined beneficiaries of government loans in the country to make good use of the opportunities and bail themselves out of unemployment.

On his part, the Honourable Minister of Transportation, Mr Rotimi Amaechi, who graced the occasion as the chief guest of honour, praised the Director-General of the NDE for religiously aligning the programmes of the Directorate with the policies of the administration of President Mohammadu Buhari who he said is determined to stamp-out unemployment especially among youths and women groups.

According to the Transport Minister, the disbursed equipment will go a long way in job creation and poverty alleviation. He also stated that the transportation sector in Nigeria today has created over two million jobs in 2021 alone.

In his address, the Director-General of the NDE, Mallam Abubakar Nuhu Fikpo, in his addressed at the  event stated that the empowerment exercise is part of the desperate efforts and plans of the Federal Government to rescue Nigerians from the claws of the unemployment monster plaguing the nation.

He further said the empowerment programme will be executed nationwide. He however appealed to unemployed Nigerians across the federation to avail themselves of the rare job opportunities being presented by the NDE.

Furthermore, the Directorate also re-launched its skill acquisition programmes and schemes in Katsina State, in a bid  to ensure that more unemployed Nigerians in the State are accommodated in the ongoing job creation empowerment programme.

In his remarks, the executive Governor of Katsina State, through his representative Alhaji Yau Gwajo-Gwajo, the State Commissioner for Local Government and Chieftaincy Affairs, eulogised President Mohammed Buhari for granting loans worth hundreds of millions of naira to the youths and women groups in the state.

He appealed to Nigerians to support the efforts of the President towards ensuring a better Nigeria for all. The Governor also seize the opportunity to enumerate various efforts of the his government towards job creation in the State.

In addition, the Emir of Daura, His Royal Highness (Dr) Umar Farouk Umar, who was the father of the day for the occasion, appreciated the federal Government for its efforts at job creation. He thanked the Director-General of the NDE for bringing the empowerment programme to Daura for the benefit of hundreds of the youths in the city.