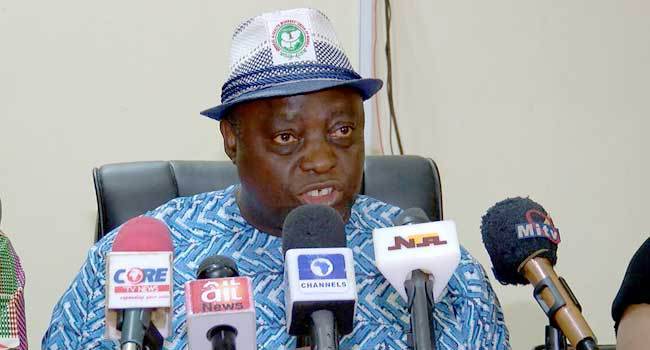 Health workers’ unions in Nigeria have urged President Muhammadu Buhari, to make provision for the adjusted Consolidated Health Salary Structure (CONHESS) in the 2022 budget before passage.

The leadership of the Joint Health Sector Unions (JOHESU) and Assembly of Healthcare Professional Associations (AHPA), who made the appeal, further warn they would not be held responsible for any counter reaction of their members should the Federal government fail to make provision for the adjusted salary structure in the budget in view.

According to JOHESU Chairman, Biobelemoye Josiah, who said this on Kakaaki, a breakfast Programme on African Independent Television on Monday and monitored by our correspondent, “The unions leadership wouldn’t be able to guarantee industrial harmony in the health sector if the president fails to include the adjusted salary structure.

“We are expecting that Mr President will do us well because as a union we have yielded to his request that we should keep the health sector strike free for the period. We have done our part, we expect that no matter the games that the Federal Ministry of Health is playing by trying to deny us our own right, the president has the power to direct that the committee’s job should be included in the budget before he signs it.

“I want to use this opportunity to call on Nigerians to plead on our behalf because we have been very patient, we have been very patriotic and we will not want a situation where all the effort we have put to ensure that there is peace in the health sector to waste because if it is not put into the budget, next year – a few days from now, which when we go into next year, certainly, the health sector will not be as peaceful as we have tried to keep it.

“If they don’t put the adjusted CONHESS into the budget then they should be ready for us.”

The JOHESU president went on to say the unions are aware that there is a provision of N80 billion set aside to take care of the salary adjustment for health workers. He added that it would be wrong for the Federal Ministry of Health to “divert” the funds for other purposes.

“At the peak of our agitation the office of the chief of staff to the president also intervened. We are aware that there was a provision of N80 billion made to take care of adjustment of salaries. It is our strong belief that even if they have not specifically stated that this amount is for CONHESS adjustment, I think there is a provision made already.

“Our money from what the committee has worked out is not beyond that N80 billion so for the president who appealed to us and who we have also listened to, we have kept our deal; we have kept our gunpowder dry. We have not shot anyone so the president should do us that favour by giving us that level of love that we have shown.

“We believe that there is provision already imputed in the budget but the federal ministry of health in its well – celebrated bias would want to say the money is not meant for us so that they can favour those who they want to favour.” He stated.

Furthermore, Josiah on the hazard allowance adjustments, said the unions have accepted the explanation offered by the Federal Government. He however warned that any attempt by government to favour one union against the other would be resisted.

His words; “As for the approval of the hazard allowance it is not where we wanted to be but as far as we are concerned government pleaded that that is what they can afford for now. Inasmuch as we would have loved it to be higher than what we asked for we have decided to give peace a chance and see how it is implemented.

“Government has issued a circular and we will abide by it for now but where the government listens to any agitation and increases by one kobo, that must be given to us too. Where government wish to take our high level of understanding for granted, we will certainly them it is not weakness.”

Meanwhile, he called for a balance in the leadership of the Health Ministry, saying this would benefit the country.

“If any government wants a proper health system, a developed health system in this country we should change from this leadership where they put medical doctors at the helm of affair. Let us go back to what took us to be among the best in the commonwealth. Hospitals’ administrators should take charge so that there will be fairness and neutrality in handling hospital affairs for all professional groups.

“Today, a matter that ought to have been handled by the HR in the federal Ministry of Health it is the Directorate of Hospital Services that is handling it and that is headed by medical doctors that is why there is huge bias being displayed every now and then and that is why since 1985 the health system has dropped from its high point down to where we are and if we must talk about international best practices then we must rejig the leadership.

“I want to ask again; if the president is hearing me, that he should rejig and any other government that is coming should take this free advice and make the health system work for the masses of Nigeria.” He said.