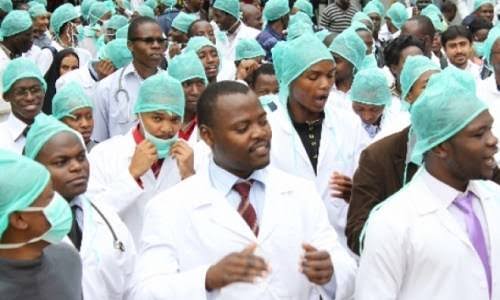 Poised to exhaust all possible opportunities in its quest to ensure Nigerians suffer no consequences of an imminent total lock down of the country’s health sector, the Joint Health Sector Unions (JOHESU) and Assembly of Healthcare Professional Associations (AHPA), has reminded the Federal government of its 15days chance to meet the terms of agreements reached prior to their earlier demands and strike notice.

According to a press statement signed by its National Chairman Comrade Biobelemoye J. Josiah and made available to labour journalists in Abuja, the unions clearly stated; “We wish to remind the Federal Government to act before it is too late on our fresh fifteen day notice as contained in her communique issued on Friday 17th September, 2021 at the end of the last expanded National Executive Council meeting

“It will be recalled that the expanded NEC comprising of the Presidents and General Secretaries of affiliate unions and Professional Associations, NEC members of affiliate unions and JOHESU Chairmen and Secretaries at the State and Branch levels on Friday September 17, 2021, critically appraised the reports of JOHESU negotiation and conciliation meetings with Federal Government since the declaration of the trade dispute through the earlier fifteen days strike notice issued on 2nd September, 2021, which expired on 18th September, 2021.

“It is pertinent to draw the attention of the federal government to our fresh fifteen(15) days strike Notice, which is billed to expire in the next few days and for it to act to avoid shutdown of hospitals and other healthcare facilities.

“We wish also to inform the general public that our NEC noted the appeal from President Muhammadu Buhari on the need to show understanding with his administration and the President’s pledge to pay any debt owed health workers. We would also wish to note some of the resolutions reached at the end of our meeting, to show that we are not strike mongers, but just for the federal government to act according to agreements reached.

“We have asked the Federal Ministry of Health to ensure speedy circularisation of all establishment and welfare matters as agreed during negotiation meetings. We Equally asked the Federal Government to ensure that the new data for the computation of the adjusted Consolidated Health Salary Structure (CONHESS) for JOHESU members be completed and submitted to the “High Level Body” (HLB) of the FG not later than Wednesday, 22nd September, 2021 as agreed.

“We also urged the Federal Government to ensure that the “High Level Body” (HLB) complete and submit the computation of the adjusted CONHESS for inclusion in the 2022 budget on or before the 30th of September, 2021 submission window.
We charged the Federal Government to reciprocate the patriotic humanitarian gesture of JOHESU in the interest of the larger Nigerian masses to expeditiously resolve all the demands within the fifteen days window.

“We unanimously adopted a resolution to step down the first notice of strike action which expired mid-night 17th September, 2021 and issued a fresh notice of fifteen (15) days.

“While we push for better welfare and conditions of service for our members, we urge the federal government to reflect the promises of Mr President in the activities relating to our demands to ensure continuous industrial harmony in the health sector.”