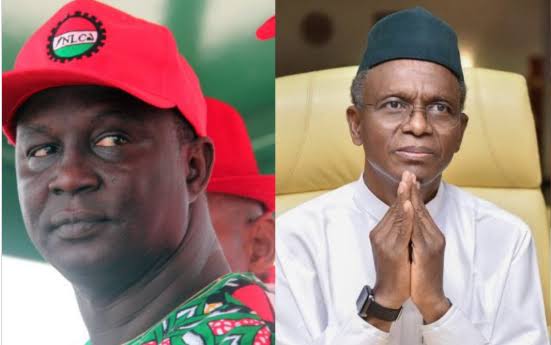 Why NLC Plans To Shutdown Economic Activities In Kaduna Again

The National Executive Council meeting of the Nigerian Labour Congress (NLC) in its recent meeting noted among many other things the reasons the Congress will return to continue a recent industrial action it suspended in Kaduna state.

In a recent statement singed by Comrade Ayuba Wabba and Comrade Ismail Bello, President and Ag. General Secretary of NLC respectively, the NCE listed its consideration on the issues and the reason why it is getting set to constitute the industrial action to include:

“The recent industrial action and protests by workers in Kaduna State was triggered by the extreme right wing, neo-liberal, anti-workers and anti-people right sizing and restructuring policies of the Kaduna State Government which led to the sacking of thousands of workers in the Kaduna State Public Service; and without recourse to the provisions of Section 20 of the Labour Act.

“That between 31st March and 1st April 2021, thousands of workers had been laid off from the unified local government system in Kaduna State, the Kaduna State Primary Health Care Agency and the KSMC. Many of the affected workers have worked for a period of between 5, 10 and 32 years.

“That letters of disengagement that were issued to the affected workers read “Your entitlement will be paid in due course”. Till date, over 21,000 teachers and 7000 other workers disengaged in 2017 by the Kaduna State Government have not received their entitlement in violation of extantprovisions of our labour laws.

“That the NLC suspended its 5 days warning strike and protests in Kaduna State upon the intervention of the Federal Government through the Federal Ministry of Labour and Employment which brokered a Conciliatory Meeting.

“That the Conciliatory meeting produced a Memorandum of Understanding signed by the NLC and the Kaduna State Government.

“That the Memorandum of Understanding stipulated that a 10-Person Committee be constituted to ensure that all processes of disengaging any worker in Kaduna State is in conformity with Nigeria’s laws particularly Section 20 of the Labour Act; and

“That the MoU categorically stated that no worker in Kaduna State would be victimized by the Kaduna State Government.

The NEC went on to Observe:
– That while the Nigeria Labour Congress has upheld its side of the bargain as demanded by the Memorandum of Understanding signed at the Conciliatory meeting, the Kaduna State Government has continued to violate with impunity the provisions of the MoU especially the “no victimization” clause. A clear case of victimization is the punitive transfer of the State Chairperson of the NLC Kaduna State Council to Birnin-Gwari which is a very remote part of Kaduna State and currently ravaged by bandits;

– That the 10-Person Committee as stipulated in the Memorandum of Understanding is yet to be constituted by the Kaduna State Government;

– That the violation of the Memorandum of Understanding reached with workers through the Congress is an extreme demonstration of negotiation in bad faith which shows lack of regard for laws and collective bargaining agreements;

– That the Congress has taken steps to bring the violations and infractions against the MoU by the Kaduna State Government to the attention of the Federal Government and the Federal Ministry of Labour and Employment; and

– That instead of retracing its steps from the violation of human and trade union rights, the Kaduna State Government has resorted to further acts of intimidation, propaganda, half-truths, falsehood and outright lies against workers and trade unions.

– That the actions so far taken by the Kaduna State Government are anti-workers and anti-people and as such are counter-productive;

– That the policies of the Kaduna State Government violate human and trade union fundamental rights especially the right to organize and the right to collective bargaining as provided for in Convention numbers 87 and 98 of the International Labour Organization (ILO); and

– That the recent proposal by the Nigeria Governors Forum through the Nasir El-Rufai Committee for an astronomical increase in the price of petrol from the current N162 per liter to between N380 and N408 per liter which translates to about 300% increase is thoughtless, provocative and insensitiveto the suffering majority of Nigerians especially workers are going through at this time.
The NEC, therefore, RESOLVED:

1. That the earlier decision of the National Executive Council (NEC) of Congress to withdraw all services nationwide and protest the extreme anti-workers policies of the Kaduna State Government should take effect without further delay. In tandem with the requirement of the law, this resolution serves as a notice to all employers of labour, effective from today, 22nd day of June 2021;

2. That the mobilization of all NLC state councils and affiliate unions for the industrial action and protest should begin immediately;

3. That all the falsehood and propaganda by Kaduna State Government should be responded to appropriately because in modern-day democracy, politicians should learn to speak the truth and should not falsify information and advance propaganda. We are concerned about the citing of military Decree 2 by Mr. Nasir El-Rufai, a law which has since been abolished under this democratic dispensation. If Mr. El-Rufai wants to return to the era of militarization of our democracy, his action should be condemned;

4. That the resort to strike action and protest is the right of workers everywhere in the world even in very advanced countries. If there is anyone to blame for the decision of the Congress it must be Mr. Nasir El Rufai and the Kaduna State Government; and