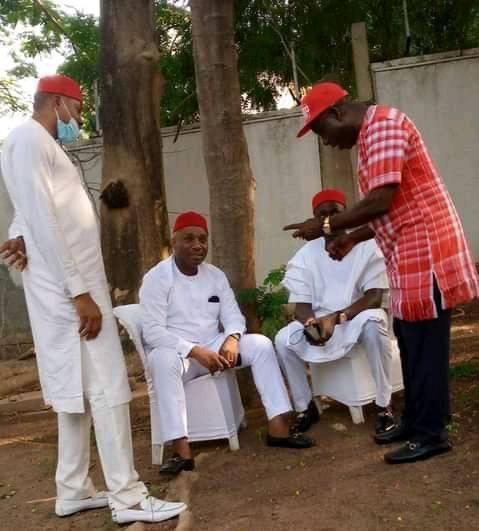 We heard stories of some who died on wheelchairs while waiting hopelessly for their reward from the very society they served, which never came. No one is alien to the state of our roads, hospitals, and other infrastructure that defined our governance values. Anambra State was indeed a failed State.

Many people attribute Mbadinuju’s failure to political god fatherism, which his successor also struggled with. And this was glaringly the truth. A system where charlatans and touts who by virtue of unrighteous connection to the higher political class fund and impose their puppets, by election manoeuvring, on the majority of devoted and patriotic voters whose votes are denied in broad day light without recourse.

Consequently, Anambra State though the light of the nation, just began to see the light of the day by the obstinacy of Governor Ngige who defiled all the chains and ritual oaths, which these so called god fathers used to force loyalty on the Governors they installed.

This manner of loyalty was the curse of Ndi Anambra, a people highly industrious and very intelligent yet raped by touting political god fathers whose motives are only to embezzle, lavish and impoverish the State to their own ends.

In the course of the struggle for freedom by Governor Ngige, these god fathers razed down many State government assets, the government house, ABS, even our own ikenja hotel and someother government structures. Their touts from Lagos and Onitsha ravaged and held the State to ransom for close to three days. Ngige, a sitting governor was abducted, held hostage and kept incommunicado, but for the intervention of the federal executive he would have been eternally declared MIA. Yet we are the light of the nation. All thanks to the god fathers that brought Ngige to power.

Governor Obi broadened the dividends of this freedom won by Governor Ngige in continuity of appreciable governance and development of requisite infrastructure in the State. His successor, Governor Obiano has played his role, which most prominently gave birth to the recently openedAnambra State airport. We all rejoice and are thankful to him for the job well done, which would have been impossible under the spell of god fatherism.

Unfortunately, Ndi Anambra, the god fathers are again at their political manoeuvring and a puppet has been paraded for us with accolades as a technocrat. They will surely take us back into a worse state if we do not heed the lessons of the past.
New candidates have emerged in different political parties prior to the deadline for primaries issued by INEC.

Among them and most conspicuous is a one-time CBN governor, a well-meaning Nigerian and a supposed technocrat who is allegedly unpopular among the masses due to his insensitivity to the grassroot of the social/political strata and alignment to the elite. This,we agree is an unforgiveable way for leaders to behave.

Surely, such scenario should be a wakeup call for us at the grassroots who felt the full effect of the Mbadinuju Saga. We should not be deceived by the titles or the campaign promises of these god fathers and their governorship slaves, which initially is sweet to the masses but eventually bankrupts the economy of the State. It is even worse now that Soludo’s god father was once a motor park tout and driver who lacks any element of native wit, empathy and patriotism.

He has sworn his conscience to their loyalty at the expense of the masses, yet many of us do not realise it. In white linen and palm fronts to the mouth before a despicable shrine he bound his conscience to the will of these primitive god fathers. Yet we are the light of the nation.

Ndi Anambra, the former god fathers whipped us with rods of wood but these new ones have those of iron. What backwardness and darkness will befall the State if we do not heed the lessons of the Mbadinuju administration.

We need leaders that are conscious of the morality of their decisions who listen to the heartbeat of the masses that elected them. Insensitivity to the grassroot is unforgiveable regardless of accolades in the palace. The primaries are here again, the god fathers are scrambling for the attention of delegates but will dump them for their elitist agenda.

I IMPLORE THAT WE VOTE GOOD GOVERNANCE BUT ABOVE ALL LET US VOTE EMPATHY TO THE PAIN OF THE GRASSROOT. Only free leaders have awakened consciences and can empathise with the masses but governorship slaves do not have a mind of their own.