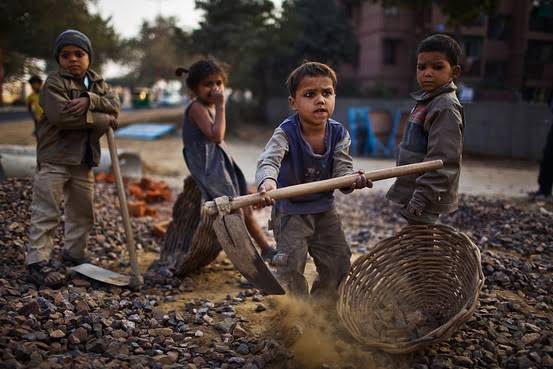 In tandem with its Convention 189, ILO also noted that “effective implementation of the policy and its action plan will reduce the rate of child labour in the country greatly.”

Represented by the National Project Coordinator ACCEL Africa Project, Agatha Kolawole, ILO Country Director for Nigeria, Ghana, Liberia, Sierra Leone and Liaison Office for ECOWAS, Vanessa Phala, at the Validation of the National Policy on the Elimination of Child labour and its National Action Plan orgnised by the Federal Ministry of Labour and Employment in Abuja,
stated that about “152 million children (64 million girls and 88 million boys) are in child labour globally, accounting for almost one in ten of all children worldwide. Some as young as 5 years old, more than 70 million of whom face harsh conditions and the prospect of a stolen future.”

“As you are aware, the year 2021 is the international Year for the elimination of child labour and Nigeria sent in its Action Pledges and I am glad to note that Nigeria have started implementing its Action Pledges.

“It gives me great honour to know that Nigeria will be following the steps of the Africa Union to officially launch actions for the year 2021 which has been globally assigned to be the international year for the elimination of child labour. Phala said.

Furthermore, the ILO Director stated that Nigeria is strategically an important in the issues of child labour and therefore is taking the right and exemplary state step in the right direction.

“In Nigeria, the National Bureau of Statistics 2017 survey report states that about 50.8 per cent of Nigerian children, ages between 5 and 17, are involved in child labour. Nigeria is also a source, transit, and destination country for women and children subjected to forced labour and sex trafficking, and a source country for men and boys subjected to forced labour. Women and girls are victims of domestic servitude and sex trafficking, and boys are victims of forced and bonded labour in street vending, domestic service, mining, stone quarrying, agriculture and begging.” Phala, said.

“The elimination of child labour is intrinsically linked to promoting “sustained economic growth and full and productive employment and decent work for all”, as established in SDG 8. However, it is worth noting that the government of Nigeria have put in place mechanism to create an enabling environment to ensure the protection of children within the workplace.

“In November 2020, through a 5-Day participatory workshop with relevant stakeholders , the report of the assessment of the implementation of the National Action Plan (NAP) for the period 2013-2017 on the elimination of child labour was validated and the report guided all relevant stakeholders to develop a draft national Policy and its action plan.

“This meeting is to finalize and validate the draft policy and National Action Plan and I am optimistic that an effective implementation of the policy and its action plan will reduce the rate of child labour in the country greatly.”

On his part, the Permanent Secretary, Federal Ministry of Labour and Employment, Dr Yerima Peter Tarfa, stated that the validation is part of Nigeria Government’s commitment to achieving Target 8.7 of the Sustainable Development Goals (SDG).
He stated that the Government of Nigeria had demonstrated the political will to ensure the achievement of Target 8.7 of the SDG, and “has shown enough readiness to address the challenges of the vulnerable groups, including eradicating Child Labour.”

He went on to note that as a Pathfinder country with commitment to take accelerated actions on combating Child Labour, Nigeria’s “commitment has translated into several actions including the recent Action Pledge made during the global Launch of 2021 International Year for Elimination of Child Labour (IYECL), as well as the formal launch of IYECL billed to hold on 15th April, 2021.”