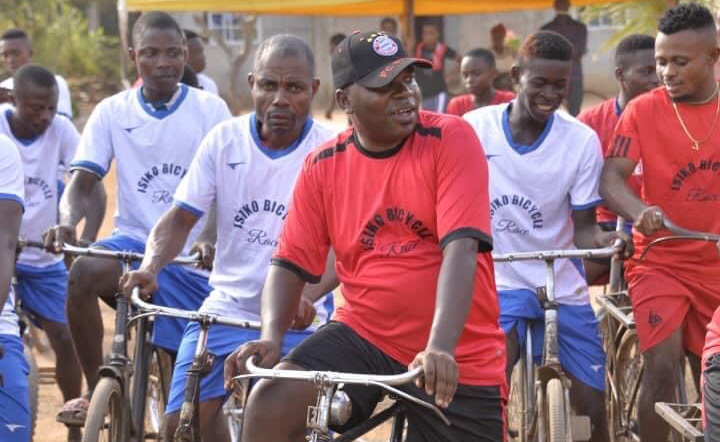 Ever since the invention of the bicycle in the early 19th century as a result of cumulative efforts of numerous innovators, it has been an inexpensive form of transportation or means of conveyance. The only exception is the human energy which is expended by pedaling the two-wheel vehicle.

Unarguably, the advent of automobiles and motorcycles contributed in no small measure to the decline in using bicycles as a means of conveyance in some Western societies, however in several central European nations, Netherlands, China and Southeast Asia, Africa, Nigeria and Ngwa land the bicycle is an essential tool for daily activities.

Cycling, use of a bicycle for sporting or recreational activities gained prominence on May 31, 1868, with a 1,200-metre race which held at the Parc de Saint-Cloud, Paris. James Moore, an 18 year expatriate Englishman won the epoch making race.

In Nigeria, the first recorded cycling race which was won by Cyclist J.J Umoh held in Lagos in 1962. The race, reportedly was a distance of 20 miles and was organized by “Raleigh”.

As a sporting event, cycling consists of professional and amateur races, which are held mostly in continental Europe, the United States, and Asia. And the categories of bicycle racing include road bicycle racing, time trialling, cyclo-cross, mountain bike racing, track cycling, BMX, and cycle speedway.

Having noted the above, there was a sensational buzz on 29th December 2020 when the Special Adviser Media to the governor of Abia State , Enyinnaya Appolos, announced on his Facebook handle, his intension to host the median Isiko Bicycle Race on the 3rd of January 2021.

According to him, “As you are already aware, the 2021 Isiko Day, the 3rd edition, will not hold. The reason is just beyond our control. The coronavirus disease 2019 (COVID-19) pandemic, hit the World in the first quarter of 2020, halted and canceled all annual events, including Isiko Day. We hope for a Double-Barrel Isiko Day in 2022.

“However, Isiko Bicycle Race has been introduced. It will hold on Sunday, 3rd January, 2021 in Isiko village. About 30 bicycle riders, from Isiko village and environs, will participate in the maiden edition and it is expected to last for just 3 hours, from 4pm to 6pm.

“Five lucky riders will go home with one brand new bicycle each, as the 30 riders are expected to participate in a raffle draw to win five brand new bicycles. Going forward, the Isiko Bicycle Race will form part of the larger Isiko Day event.”

The media aide to the governor also noted that the utility bicycles which his brethren use in Isiko would be adopted for the exercise.

“Yes, the type of bicycle we will use is the type we are familiar with in Isiko. The one all of us who grew up in Isiko and environs are conversant with, and have been using from childhood.” He added.

Though the CEO of “Rethink Media”, had 30 bicyclists in mind, the surge in the numbers of those willing to participate in the historic exercise led to an upward review of the participants to 70 at the end of the day.

Furthermore, in a bid to ensure that those who indicated interest in the cycle race would have a solid footing for the exercise, the beloved son of Isiko contracted a bicycle mechanic who overhauled all the utility bicycles that were used for the exercise.

At exactly 4pm on 3rd January, the cycle riders converged at Ahia-Eke, the market square of Isiko where branded cycling apparels were gifted to them.

Several minutes later, the peloton; comprised of both sexes and of different age brackets led by Appolos commenced the over two hours momentous exercise passing through the mapped out routes which included Ekwereazu Ngwa village down to Nto’Edino, a border community in neighbouring Akwa Ibom State and back again to Ahia-Eke Isiko in Obingwa Local Government area of Abia State.

As the cycling progressed, the dwellers of the villages on the routes of the race abandoned their chores and cheeringly wave at the bicyclists, as they passed by.

Interestingly, the cycling event snowballed into a carnival as several folks accompanied the cyclists through the designated routes with their bicycles, motorcycles, tricycles and vehicles.

Intermittently, Appolos who led the race from the front row paused to ensure that all was well with his fellow bicyclists. The brief stops enabled all involved to catch their breaths momentarily admists banters and jokes.

They all understood that the cycling was not a competition per-say as there were no first, second, third ,fourth or fifth positions to be earned by anyone but rather that it was a ticket to participate in the raffle draw at the end of the day.

Adding to the fun was a commentator in a Toyota Hilux pickup truck who announced the progress of the exercise and also chronicled the names of the villages being passed.

Also complementing was a Disc Jockey who belted out contemporary tunes of various genres to the delight of the rural dwellers who reciprocated by either dancing or swaying their bodies to the rhythms that appealed to them.

As a perfectionist who leaves nothing to chance, the immediate past Chief Press Secretary (CPS) to the Abia State governor ensured that there was a vehicle to evacuate anyone who became fatigued to continue with the exercise. It also had the essential first aid medical supplies and water to assuage the thirst of the riders. However, the cyclists all completed the exercise with no casualties.

On arrival at Ahia-Eke (Isikor market square), the raffle draw for the five bicycles procured by Appolos, was immediately conducted by the duo of the Senior Special Assistant to the Governor on New Media, Mr. Newman Ubani and the Secretary to Obingwa Local Government area, Bestman Eruba.

Prominent amongst the winners of the five bicycles courtesy of the raffle draw was the Village-Head of Isikor in the person of Mr Okoro Nwakanma, who joyously commended the initiative and pointed out that it was worthwhile.

On ground to witness the cycling event were a Senior journalist with the Vanguard Newspapers, Saintlevinus Okechukwu Nwabughiogu and a media aide to the Abia State governor, Matthew Eyinnaya Clinton amongst others.

Unanimously, they intoned that the cycling race was a novel idea, that is not only gainful health-wise but is a perfect tool to facilitating unity, love, peace and progress among the rural dwellers.

As the news of the Isiko Bicycle Race went viral on the social media, a testament of the positive reception of the event by members of the public manifested on the 4th of January when a prominent Abian reached out to the organiser and pledged to support the 2nd edition of the bicycle race which would also be an integral part of the 3rd edition of “Isiko Day” with 50 cycling apparels and foot gears.

To this end, Enyinnaya Appolos’s novel initiative is in no small measure a reawaken call to Ndi-Ngwa, Abians and the nation at large to go back to the unifying activities that have been taken for granted and use them to resonate cohesion, progress, development and peace.

The event also re-echoed the health benefits associated with regular cycling. It was a wake up call to folks who can ride a bicycle, to consider using it for regular exercising. It also highlighted the recreational or entertainment aspect to which it could be deployed in our clime as is obtained in the western world.

As rightly said by Appolos, “here in Isiko, we have so many things that are unique with us. We decided to go back to our roots to do cycling. There is no family in Isiko that does not have at least two bicycles.

“We have been riding bicycles before we bought cars, started flying in airplanes, sailing through the waters and we would never stop. Whenever we arrive Isiko from our respective abodes in the city, we park our cars and make use of our bicycles.”

Apparently, beside the fact that the event has once again launched Isiko Village to the limelight just as the famed “Isiko Day” event which debuted on January 3rd 2019 courtesy of Appolos, the Isiko Bicycle Race was indeed a pointer that many activities which look rather common could be used to project the culture of a place (people) and most importantly as a tool for peaceful co-existence.

Essentially, Isikor Bicycle Race was an event that uniquely instigated a new flavour of unity and brotherly and sisterly love, and of course; progress. It most importantly showed and provided especially to the youth; a pathway to aim high, to work hard, to shun crime, to be civil, to engage in legitimate ventures and to remember to give back to their communities.