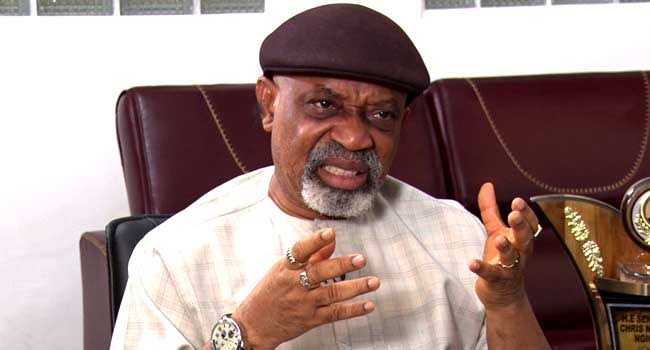 The Minister of Labour and Employment, Senator Chris Ngige has mourned former Military Administrator of Lagos and Imo states, Rear Admiral Ndubuisi Kanu (rtd.) who died on Wednesday at the age of 77.

Ngige described the demise of Rear Admiral Kanu as an irreplaceable loss of a gallant soldier, a bridge builder, an advocate of progressive democracy and civil rights as well as a firm believer in a strong and united Nigerian nation.

A statement by the minister’s media office in Abuja Thursday, says that Nigeria lost a patriot, a federalist and a true believer in the core values of the country.

According to Ngige, Kanu’s death is as a big blow to the Igbo nation and Nigeria in general, more so, coming at a time that the country needed his services most.

“He rendered selfless service as Military Administrator and distinguished himself in several top command and exalted positions he held as a naval chief in the Nigerian Military while in active service. He was the first Chief Executive of Imo State and displayed an enviable pioneer role, laying solid foundation for the take-off of the state and later, was redeployed as Administrator of Lagos State where he devoted a great energy towards the development of Lagos and displaying an uncanny attribute of a non-materialistic person, a quality which endeared him to all, especially his bosses and Lagosians.

“He was the major and prime mover of Ndigbo Lagos, a sister organisation to Aka Ikenga that helped to develop Igbo intellectualism and peace with their host in Lagos.”

Ngige noted that Nigerians will forever remember the contributions of Ndubuisi Kanu to the struggle for the restoration of democracy in the country and enthronement of civil rights of citizens, especially the role he played during the June 12 NADECO struggle.

“In all his struggles, the people remained paramount, even as he championed and promoted dialogue, nation-building and peaceful co-existence among the various ethnic nationalities that make up Nigeria, especially as Lagos State Administrator. Ndubuisi Kanu believed that Nigeria was large enough to accommodate and cater for everybody, irrespective of ethnic, cultural and religious differences.”

Ngige said Ndigbo and Nigeria would sorely miss him and his interventions at critical moments in the country’s national life, adding that the vacuum created by his death would be very difficult to fill.

The minister used the opportunity to condole with Kanu’s colleagues in the military, the government and the people of Abia State and the immediate family of the deceased and prayed that the God Almighty should give them the strength and the fortitude to bear the loss of this gentleman and to accept his soul in paradise.