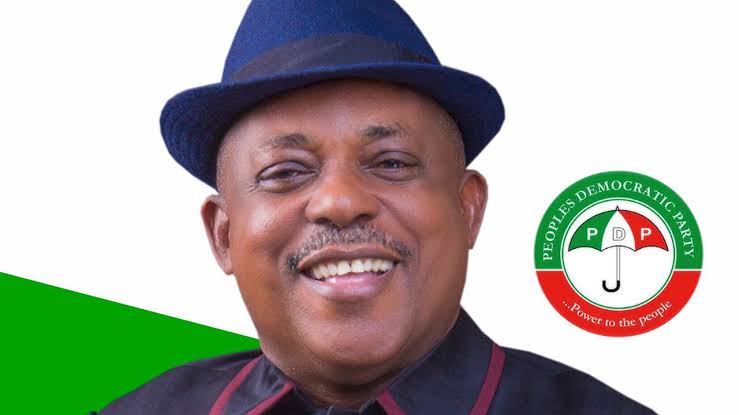 Governor Nyesom Wike of Rivers State has explained his recent comment against perceived abnormalities of the Uche Secondus led National Working Committee (NWC) of the Peoples Democratic Party (PDP), saying that his criticism should not be misconstrued to mean the presence of irredeemable crisis in the party.

The governor has also stated that since he lacked the capacity to decamp to another political party, particularly, the All Progressives Congress, he would continue to speak out against perceived abnormalities in the PDP to ensure that it does not die.

Governor Wike spoke on Sunday 13th December, 2020 while playing host to friends and political associates who paid him a surprise visit, to felicitate with him and his wife, Justice Eberechi Nyesom-Wike on his birthday at the Government House, Port Harcourt.

Wike had raised much anxiety within the PDP following his strong comment, especially given his role in the emergence and election of Prince Secondus as national chairman.

Governor Wike, explained that as a founding member of the PDP, he would continue to speak against whatever is militating against the progress of the party, irrespective of who is in charge of the NWC.

Meanwhile, a high level scheming towards the replacement of the PDP National Chairman, Chief Uche Secondus has taken a momentous level with Governors elected on the platform of the party spearheading the move.

Secondus, who was elected in December 2017 and still has a year to complete his current term “may not secure reelection for a fresh term even if he barely manages to survive till December 2021,” a source close to the party revealed ­

It was also gathered that while Secondus got a respite from the party’s handling of the political crisis in Edo in which it accommodated Gov­ernor Godwin Obaseki who eventually won the state for the PDP, the recent loss of Ebonyi State to the APC has put the PDP chairman on the spotlight again as demands for his removal heightened.

A source also hinted that the situation has become more complicat­ed for Secondus owing to the antagonistic position of Riv­ers State governor, Nyesom Wike, who played a crucial role in his emergence as the PDP chairman in 2017.

According to him, Wike’s no love lost relationship with Secondus started in October 2018 after Atiku Abubakar defeated Wike’s candidate, Governor Aminu Tambuw­al of Sokoto State to emerge as the presidential candidate of the PDP.

After referring to the Sec­ondus-led National Working Committee (NWC) as tax col­lectors in June, Wike at the weekend also accused them of sowing seed of discord among PDP governors and jeopardising the party’s pros­pect to clinch the presidency in 2023.

A visibly angry Wike said it was regrettable that in­stead of capitalising on the inefficiency and maladmin­istration that has character­ised APC five years in power, PDP’s NWC is deepening cracks in the party.

He explained that rather than focus on strategies on how to take advantage of the growing disenchantment with the APC government, the NWC is sowing a seed of discord among governors using two former governors of Imo and Cross River states and a present senator from Benue State. The governor accused the current leader­ship of NWC of merely be­ing interested in retaining the current structure of the party to remain in power, and not to win the 2023 election.

“PDP ought to have har­vested from the inefficiency of the APC; from the mal­administration of the APC. Ordinarily, that is what op­position party ought to do. If you ask me, are Nigerians waiting for a change? Yes. If you ask me as a member of PDP, Am I ready to support PDP to takeover, yes. But, if you ask me currently as it is, is the leadership of the party willing for us to harvest this opportunity for a change, I will say no.

“An opposition party that ought to be united, to work, to take over the affairs of government, because people are waiting for this opportu­nity, but the current leader­ship of NWC is not prepared for that, rather, what they have done is to constitute some people to sow a seed of discord among gover­nors for their own selfish interest. And that will boo­merang; that will consume them”, Wike had said.

Our source, who was a member of the party’s Board of Trustees, said even though Wike was not specific, his outburst was directed pri­marily at Secondus. He added that given the influence Wike wields in the PDP, especially among the party’s governors, Secondus days in office are numbered.

He also added that aside the belief by many members that Secondus lacked the ca­pacity to carry the party be­yond its present level, others believe that the party under his leadership has failed to live up to its expectations as Nigeria’s major opposition party which is expected to put President Muhammadu Buhari and the APC on their toes.

“Honestly, Secondus days as the PDP national chair­man are numbered. The real­ity is that even if he manages to complete his current term, his chances of getting reelect­ed are so remote. The NWC-led by him no longer enjoys the support of majority of party members and the recent loss of Ebonyi has further wors­ened the situation.

“If you look at the out­burst of Governor Wike who helped Secondus to power and the statement made by Bukola Saraki, former Sen­ate President, threatening to resign as chairman of the party’s reconciliation committee if Secondus con­tinues to interfere in the pro­cess, then you should know that Secondus no longer en­joys the popularity of party members who produced him in 2017.

“Across board, there is a silent grumbling in the par­ty that the leadership must be reconstituted if the party is serious about returning to power in 2023”, he said.

When contacted, a mem­ber of the party’s NWC said rumours that PDP governors are disenchanted with Sec­ondus and wanted him out is untrue.

“The report is not true. If it is correct, I will tell you so. How many governors do we have in the North? North- West is two; North-East is three and North-Central is one. Who is opposed to Secon­dus among these governors? None, I can say.

“On those blaming Sec­ondus for defection, how many governors defected? What was the reason for the defection? Governor Umahi left PDP and blamed Gover­nor Wike for his decision. He never accused the NWC of anything”, he said.

Also speaking, Kola Olog­bondiyan, national publicity secretary of PDP, said APC which is now a dead political party having dissolved all its structures is looking for ways to destabilise the PDP at all cost.

“The APC is not serious. The truth is, their party is in disarray and they want to break PDP so that they can form a new party. They will not succeed”, he said.