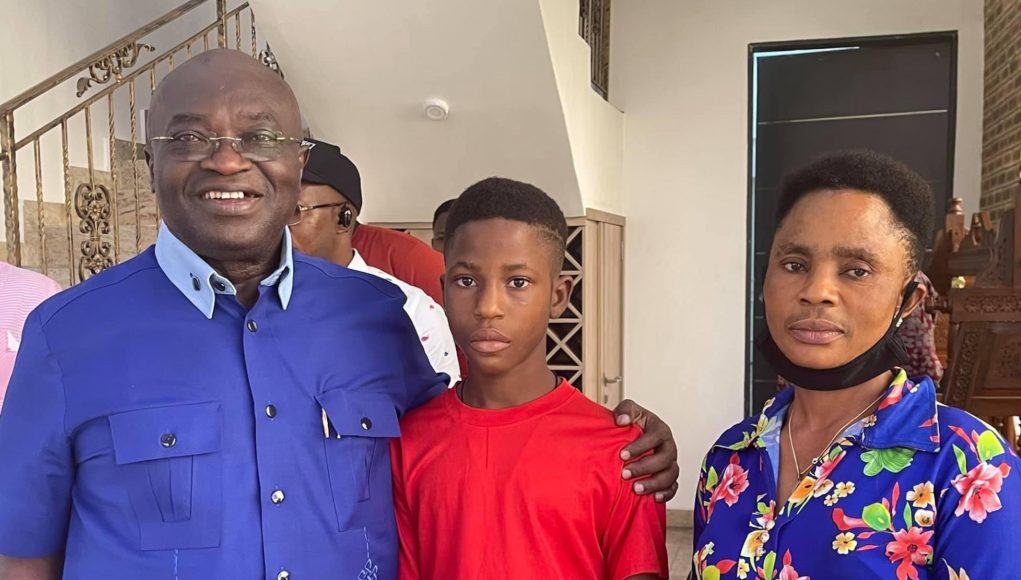 A 15-year old boy, Chibuike Ibekwe, who dropped out of school and took scavenging at the Ariaria international market, Aba, as a means of livelihood to assist his poor mother, has been awarded scholarship by Abia State Governor, Dr Okezie Ikpeazu.

Governor Ikpeazu, who received Chibuike, his mother, and the chairman of Ariaria International Market, Elder Emeka Igara, at his at residence in Umuobiakwa village, Obingwa Local Government Area of the State, where he awarded the scholarship and cash assistance; praised the young boy for his patriotic act and honesty.

“Your name is Chibuike, and mine is Chibuike, too. I am happy you’ve proven to be very honest and patriotic. Honest people go far in life. Those who do not take what does not belong to them are people that God helps and saves in their times of difficulty. Thank you for being honest and for not taking what did not belong to you. You will go far in life.

“Your today can’t decide your tomorrow because you are honest. You will go back to school. I will ensure you finish your secondary education because you are honest. If you remain honest, you will remain my friend and I will make sure you see me every month. What you have done by returning the goods to the owner is a mark of honor and proof of your honesty. Thank you, once again, Chibuike for being honest”, the Governor said.

The young boy; Chibuike, who hails from Mbano in Imo State, in an act of patriotism returned a bag containing new shoes mistakenly given to him to dispose by one Mrs Goodness Uzoukwu, a trader in Ariaria, who thought the content of the bad was trash.

But when Chibuike got to where he disposes waste and discovered that the content of the bag given to him by Mrs Uzoukwu
who sales shoes and wears was not waste but goods, he decided to return the shoes to her, refusing to listen to those who wanted to buy them from him.

Joyed and impressed by his action, Mrs Uzoukwu rewarded him and videoed young Chibuike as she thank him for returning her goods. She posted the video on her Facebook page and it went viral.

Impressed by the young boy’s action when he came across the video, Governor Ikpeazu, enquired about Chibuike, and through the effort of a trader in Ariaria who is an executive of the market leadership by name Chibuike Okebugwu, the 15 years old scavenger and his mother were brought to the Governor.

Eye witness said that Chibuike’s mother, who got a huge financial boost to her petty trading business, was unable to control her emotions for what God has done for her family through the Governor.