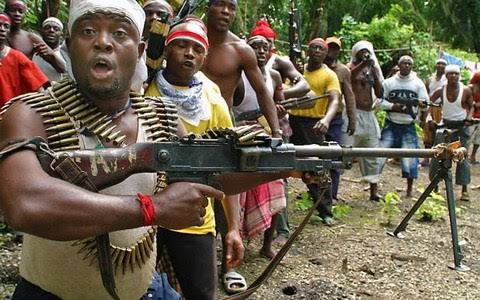 …calls for implementation of resources control, review of oil blocs

In reaction to the recent reports of mining of gold in Zamfara State, former militants under the aegis of Niger Delta Liberation Force, (NDLF) Akwa Ibom State, has said that the exploration of gold in Zamfara by the State government is a typical example of how the Niger Delta States should also control the oil resources in their region.

The group therefore demand for the implementation of resource control and for total restructuring of Nigeria to pave way for decentralization of powers.

According to a statement signed by Nkarijo Waribo and Victor Eyoh on behalf of the group on Monday and made available to Newsmen in Abuja, NDLF said: “At the formal inauguration of the Niger Delta Liberation Force, Akwa Ibom State Command, with over seven hundred members in attendance, the militant group hereby reminds the Federal government of its earlier demands for the Restructuring of the country to pave the way for decentralization and devolution of powers to the component states which will ensure the sustenance of even development, peace and security in the country.”

Furthermore, the Ex-militants demanded for the implementation of resource control by the respective states/geopolitical regions who own the natural resources as this will enable them fully exploit the resources to their own advantage and economic development. Recent information has confirmed the Federal government’s investment in the development of gold in Zamfara State through the Central Bank of Nigeria which will ensure the State to develop and control the production of gold.

“This is what is what is supposed to happen to all the states and regions in their quest for resource control. The government must therefore re-negotiate its economic relations with the niger delta region in the continued exploration and exploitation of crude oil as is being currently done in the North, after-all as the popular adage says, “what is good for the goose is also good for the gander”, the group said.

According to the group, “It is a clear case of injustice for some individuals who are mostly non-indigenes of the region to hold oil wells and enrich themselves and their families at the expense of the people of the region.”

They also alleged that the controllers of the oil blocs causing troubles in the region through an illegal connivance with the officials and security operatives to shortchange the people.

Moreso, NDLF called for the scrapping of ministry of Niger Delta Affairs, saying it had failed to fulfill its mandate.The militants also lamented the activities of major oil companies, saying they have left many communities uninhabitable.

“The controllers of these oil blocs are the major problem and the crises in the Niger Delta today as majority of them divert the funds meant for community development to their private use, steal crude oil through barges in connivance with NNPC officials and law enforcement agents and refuse to sign/update relevant MoUs with their host communities. Instead, they bribe and collude with traditional rulers in the oil producing areas to rip off the suffering masses, leaving the oil communities devastated and impoverished.

“We therefore demand that Oil Prospecting and Oil Mining Licenses of all oil companies operating in the niger delta be withdrawn and the review processes/procedures should commence with immediate effect in the interest of peace in the Niger Delta and Nigeria at large. The governments/people of the niger delta region should be given the ‘Right of First Refusal’ as far as the ownership/control of the oil blocs and marginal oil fields is concerned before other Nigerians, no matter how influential they are. This will ensure justice, equity and fairness on this matter,

“We shall, therefore, resist any further attempt by government to entrust our oil blocs to these companies, who neither care about the wellbeing of the Niger Delta people, nor genuinely committed to the development of the oil producing communities.

“Furthermore, the Niger Delta Liberation Force hereby demands for the scrapping of the Federal Ministry of Niger Delta Affairs since it has failed to fulfill its mandate. Since its creation, the Ministry under preceding governments has become conduit pipes for government officials saddled with the responsibility of administering it and agencies under it to siphon funds meant for the development of the region. Government should scrap the Ministry and rather show enough commitment to the successful operation of the Niger Delta Development Commission (NDDC) to achieve its set objectives through adequate funding and transparent management.

“We observe with sadness the scenario where multinational oil companies and their subsidiaries as well as oil servicing companies operating in the oil producing areas of Akwa Ibom State, particularly in Eastern Obolo, Ikot Abasi, Esit Eket, Ibeno and Mbo Local government areas, leave these communities completed, devastated, and marginalized. Prominent among them are oil giants, Exxon-Mobil, Total E & P, Addax Petroleum, Savannah Petroleum, AMNI International Petroleum, Oriental Energy, Sterling Global And Energy Production Company (SEEPCO), Moni Pulo, and others. These companies have consistently embarked on anti-community activities and have bluntly refused to relocate their operational bases to the state or develop their host communities through their discharge of functional MoUs and Corporate Social Responsibilities to their host communities. We therefore demand that government should withdraw their licenses with immediate effect”, the group stated