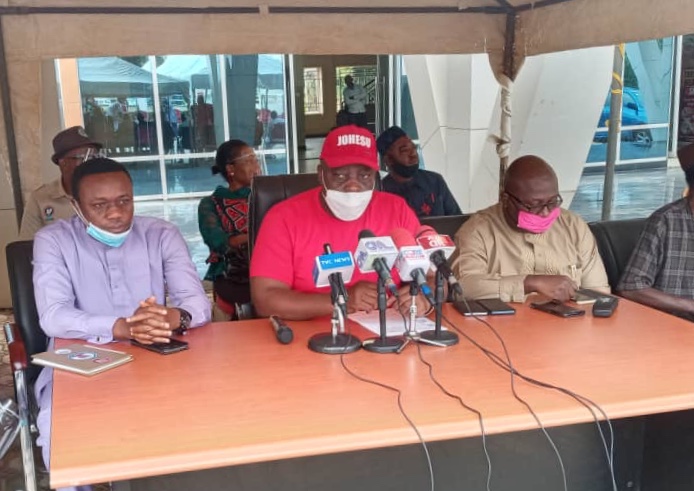 The Joint Health Sector Unions (JOHESU) and Assembly of Health Care Professionals, have said they will no longer condone the Federal Government;s continuing act of taken for granted their patriotism in rendering healthcare services to Nigerians despite many unfair labour treatment.

To back their statement with action, the Unions went on to direct its members at the Federal, State and Local Government Areas (LGA), to mobilize and commence a seven days warning strike, should government fail to meet their demands at the expiration of its 15 days Ultimatum on 13 September, 2020

Rising from its marathon meeting over the weekend, the National Chairman of JOHESU, Comrade Biobelemoye Joy Josiah, when he addressed Journalists on the outcome of the meeting on Monday in Abuja, further accused the Federal Government of playing childish tricks with health workers demands, especially the COVID-19 allowance, as he added that they were not ready to die of hunger, wrong.

The Unions also frowned at the recent increment in petrol, electricity tariff and stamp duties, which it lamented had thrown Nigerians into more hardship while struggling to recover from the sufferings occasioned by the COVID-19 pandemic.

Comrade Josiah also hinted that JOHESU is unanimously asking that the Minister of State for Labour and Employment, Festus Keyamo, take over negotiations between the Unions and government from the substantive Minister Senator Chris Ngige, whom was accused of compromise despite being a medical doctor.

According to Josiah, it was worrisome government was foot dragging on some health workers demands which were specific court judgments, collective bargaining agreements and Memorandum of Understandings (MoUs), but have been treated with levity and outrightly violated for almost a decade in some instances.

Some of the lingering welfare issues under contention were; review of implementation of COVID-19 special inducement and hazard allowance, payment of all withheld salaries of members at JUTH, FMC Owerri, LUTH, including april and may 2018 salaries, adjustment of CONHESS salary structure and the implementation of ADR consent judgment.

In his words: “The Federal Government, States and Local Government Areas must come-up with COVID-19 palliatives to the citizenry while improving service delivery and remedial measures to combat failing and decaying infrastructural facilities.

“Immediate payment of the shortfall in the COVID-19 allowances of non-clinical staff in the FHIs presently pegged at 10% to the agreed 50% of basic salaries paid all clinical staff in the FHIs. States and Local Governments that have not domesticated the COVID-19 allowances for their clinical and non-clinical health workers are advised by the contents of the agreement to do so without further delay in order to avoid break down of industrial harmony in their health sector.

“Unconditional payment of all withheld salaries at Federal Medical Centre, Owerri, JUTH, LUTH and the compliments of April and May, 2018 salaries which were vindictively authorised by the wicked and malicious Prof. Isaac Adewole administration at the FMoH.

“The FG is strongly admonished to authorise the Hon. Minister of State for Labour and Productivity, Barr. Festus Keyamu SAN to lead the FG team that will redress the clamour for the adjustment of CONHESS as was done with CONMESS to guarantee fairness and justice to all parties concerned like it was when Late Barr. James Ocholi SAN was saddled with the same responsibility in 2016, since it has become too obvious that Dr. Chris Ngige has not been able to live up to the status of an ideal arbiter because of his background as a Medical Doctor who has vested interest to align with the NMA position because he remains a committed member of the professional body.

“The Presidency must insist in tandem with the rule of law that the FMoH must adhere to and obey all the dictates of the consent judgement of the NICN as delivered on March 19, 2019.

“If the FG does not meet these demands by mid-night of September 13, 2020, JOHESU will have no other choice than to commence a nationwide 7-days warning strike of our members in all the Federal Health Institutions (FHIs). The States and LG Health Institutions are placed on red alert for possible entry into the fray if the FG foot-drags in attending to our demands.

“JOHESU reiterates its commitment to continue to work with the Federal Government and all stakeholders in its bid to improve the ailing and over-stretched health system with necessary reforms in public interest.”

“In the light of this, we solicit urgent pro-active measures geared towards avoiding a disruption of services in the Health Sector by statesmen, traditional rulers, religious bodies and other men of goodwill within the lifespan of pending ultimatum to Government in the ultimate National interest.

On the increase in petrol and electricity tariff, Josiah urged the federal government to begin local refining of Petroleum products, in order to mitigate the volatility of the prices with attendant anti-masses effect.

“We at JOHESU take cognisance of the deregulation of fuel prices by the PPPRA and we condemn it as insensitive to the plight of the people just as the introduction of stamp duties to be paid by tenants in properties to the FIRS remains the climax of absurdity. We therefore request the FIRS to reverse the stamp duty.

“It is worrisome that when other countries are offering palliatives as well as reducing inclination towards social dysfunctions, our leaders appear to be sowing seeds of hardship and bitter pills to bring depression to the doorstep of citizens.

‘JOHESU calls on Government to expedite action to ameliorate the pains of the citizenry generally while specifically improving on gadgetry, equipment and so on in the Federal Health Institutions (FHIs) for optimal outcomes or derivable.”