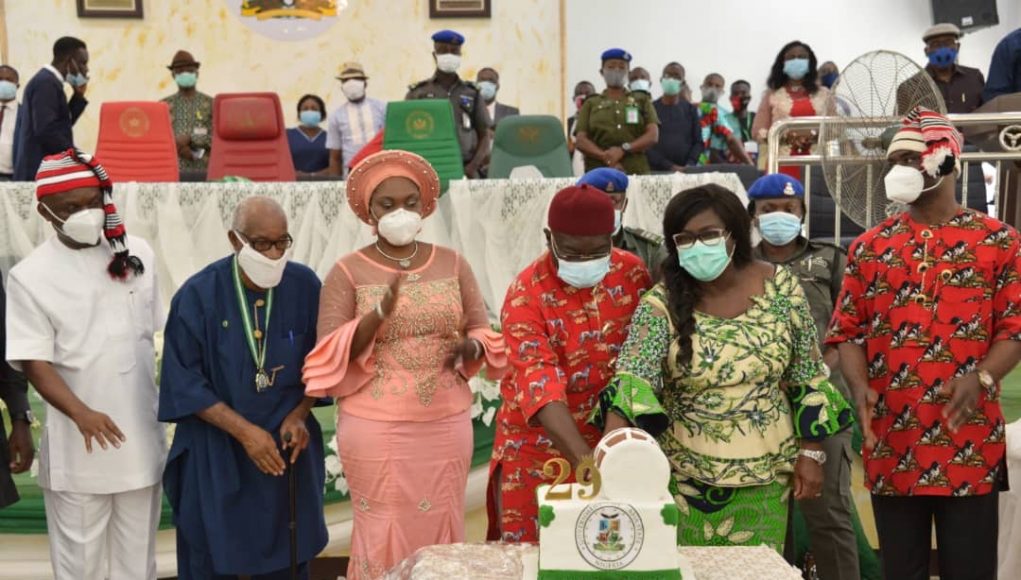 The 29th Abia day celebration took a new dimension as Governor Okezie Ikpeazu honoured COVID-19 front line workers and persons who distinguished themselves in service to humanity, describing Abia state as a work in progress.

Speaking at the event which held at the Micheal Okpara Auditorium, Umuahia, Governor Ikpeazu while congratulating the awardees said, “the award is not to them as individuals but an award to salute hardwork,industry, commitment, loyalty and love for fatherland”.

The Governor also used the opportunity to salute other Frontline officers including Medical Doctors, Nurses and Paramedical staff that are working to ensure that the war against COVID-19 is won and expressed confidence that the country and world in general will conquer the debilitating effects of the pandemic.

He described the development of Abia state as work in progress, pointing out that “it is not possible for any adminstration to complete all there is to be done”.

“29 years ago, the lofty dreams of the founding fathers of our state to have a state of their own came to fruition. Over the years, we have continued to grapple with the enormous challenges of developing our state.

“Since mid 2015 when you elected me as Governor, my adminstration has faced the Hydra headed challenges of governance head on. While we continue to face challenges, we beat or chest in humility and say that we have made lots of progress and recorded dinner solid achievements in several areas.

“The challenges posed by the pandemic may have slowed us down but the pursuit of our vision remains sacrosanct and unimpeded. Let me assure you that we are on the March. Our promise, under God, is that we will build a state that is more economically viable, more infrastructurally stable and more economically responsible”,Ikpeazu said.

Governor Ikpeazu who used the opportunity to outline his adminstration’s achievements in areas such as health, education, Agriculture and Industry among others, and disclosed that 16 new roads will be commissioned in the days ahead bringing the total number of roads done by his government to 200.

He commended Abia stakeholders for the political stability and robust relationship enjoyed in the state as well as the support of the state advisory council toward the success of his adminstration.

The 2020 Abia day celebration featured a lecture titled “COVID-19: Awareness, impact and citizen response in About state by a consultant public health and community medicine physican, Dr. Mrs Ejiro Carol Iwuoha as well the cutting of the Anniversary cake and was attended by the Wife of the Governor, Mrs Nkechi Ikpeazu, the Deputy Governor, Rt. Hon. Udo Okochukwu and wife, lady Vivian, the speaker, Abia state House of Assembly,Engr. Chinedum Orji, State Chief judge, Justice Onuoha Ogwe, the secretary to the state government, Barr. Chris Ezem and Chief of Staff to the governor, Dr Anthony Agbazuere among others.