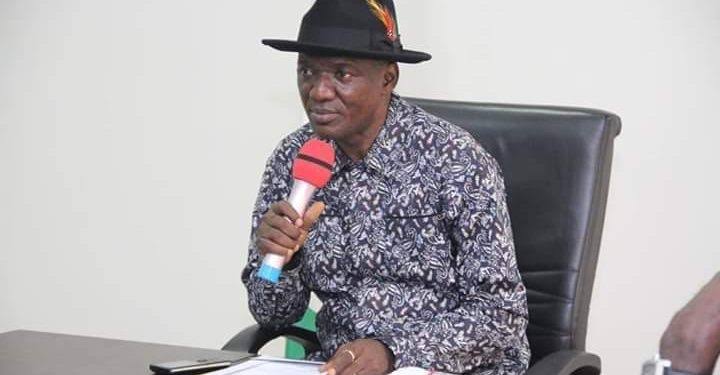 Ewhirudjakpo and Diri who are 4th and 3rd respondents respectively in a petition by Mr. Vijah Opuama, candidate of the Liberation Movement (LM) in the November 16, 2019, governorship candidate in Bayelsa Sate, challenging Ewhrudjakpo’s qualification to stand election.

Opuama alleged, in the petition, that Ewhrudjakpo and Diri were not qualified to have stood for the election based on the ground that they were both sitting members of the National Assembly, and ought to have resigned before vying in the election.

The petitioner further accused the Deputy Governor of discrepancies in his NYSC exemption certificate.

Ewhrudjakpo, who had testified before the tribunal as a subpoenaed witness by the petitioner, explained that there was an error in his NYSC exemption certificate, which was the fault of the NYSC, adding that the typographical error was corrected when he applied to Corp.

In his reply on points of law to the peptitioner’s final written address filed on July 1, 2020 and served on July 3, 2020, the Deputy Governor through his lead counsel, Chukwuma-Machukwu Ume (SAN), the deupty governor contended that “Nowhere in the pleadings did the petitioner’s alleged discrepancies sought to be established by exhibit P3 (the letter to the Director General, DSS from the Director General NYSC dated May 27, 2020). In other words, the case of the petitioner was not whether his name was altered or mutilated from “Ewhiruodjakpa to Ewhirudjakpo (i.e. alteration of the letter “O” in the former to “D” in the latter.) Neither was it the case of the petitioner that the letter “A” in the former was altered to “O” in the latter.

“What the petitioner submitted in Paragraph 4.09 that the 3rd and 4th respondents are still members of the National Assembly and that their tenure of office will expire at the same time with that of the Governor and deputy Governor respectively sounds more like moonlight tales,” Ume contended, urging the tribunal to “employ a contextual and holistic approach in the interpretation of the provisions of Section 68(1)(d) of the constitution of the Federal Republic of Nigeria 1999 (as amended) to hold that the 3rd and 4th respondents are not employed public officers within the meaning of Section 318 of the constitution. And as such needed not to resign from office within 30 days as stipulated under section 182(1)(g) of the constitution before contesting for the Bayelsa State Governorship Election held on 16th of November, 2019.”

Ewhrudjakpo further contended that the documentary evidence tendered before the tribunal by the State Security Service (SSS) concerning the petition against him were fraught with contradictions that cannot be relied upon by the tribunal.

“To further point out the inherent contradictions in exhibit P3, annexure 1 attached thereto, which was the certificate by the 4th respondent (Ewhirudjakpo) to the 1st respondent (INEC), for the purpose of contesting the Bayesla Senatorial election, has his surname spelt as “Ewhiruojakpa”.

He urged the tribunal to note that he submitted the said certificate six months before his application for correction. “What then would be the rationale for him to alter the same certificate he seeks to correct after attaching other certificates in his request for correction by NYSC?

He further submitted that “since the purport of exhibit P3 is to establish that he altered his certificate before application, could the NYSC have effected correction on a forged certificate without raising eyebrow.

Ume drew the attention of the tribunal to the fact that “in petition No.1 before this tribunal, this same PW1 who tendered this exhibit P3 tendered a similar documents with curious difference. In that petition No. 1, it was marked exhibit P31 but CTC of it was tendered herein as exhibit R3.

In addition, Ume informed the tribunal that the said exhibit P3 is also in total contradiction to paragraph 3 of exhibit R8 wherein the same Director General of NYSC in it’s earlier letter dated March 10, 2020 to the same DG DSS stated:

“His name with typographical error as Ewhruojakpa Lawrence O. and same was in scripted in the certificate of eligibility under reference. However, Mr. Lawrence recently forwarded an application for correction of name dated April 4, 2019 and requested for correction of his surname on his certificate of exemption from Ewhruojakpa to Ewhrudjakpo supported with relevant documents marked annexure A-E.
“Accordingly, his request for the correction was thereafter granted and duly effected in the scheme database and on the original certificate of exemption No.139708 since it is minor correction that does not require replacement of the certificate annexure F-G.
“In street parlance this drama is called the American Wonder! Can the office of Director General of our Youth scheme afford to issue conflicting reports? Can one prosecutor/investigator present inconsistent evidence against a defendant/accused.
In urging the tribunal not to attach any probative value to those exhibits, Ume submitted that no tribunal worthy of it’s name will accept conflicting statements as in the instant case.
With respect to the allegations of falsification of age, Ume submitted that his client has been consistent in his declaration of age as contained in all the exhibits he tendered before the tribunal.

The management of the Rivers State University (RSU) had earlier told the truth that Deputy governor, graduated from the school.

An official of the school, Fyne Le Amanyie, told the tribunal that Ewhrudjakpo graduated from the university in the 1996/1997 academic session, with the graduation ceremony held in 1998

Amanyie testified before the tribunal as the respondent witness number 4 upon a subpoena issued on the university.

The witness, led in evidence Ume (SAN), said he had been a staff of the university for over 30 years.

“I am a Legal Officer in the Department of Directorate of Legal Services, Rivers State University. I was served with the subpoena of the tribunal on June 11, 2020,” he said.

He noted that instead of Ewhrudjakpo, the name was written as Ewhrudjakpa.