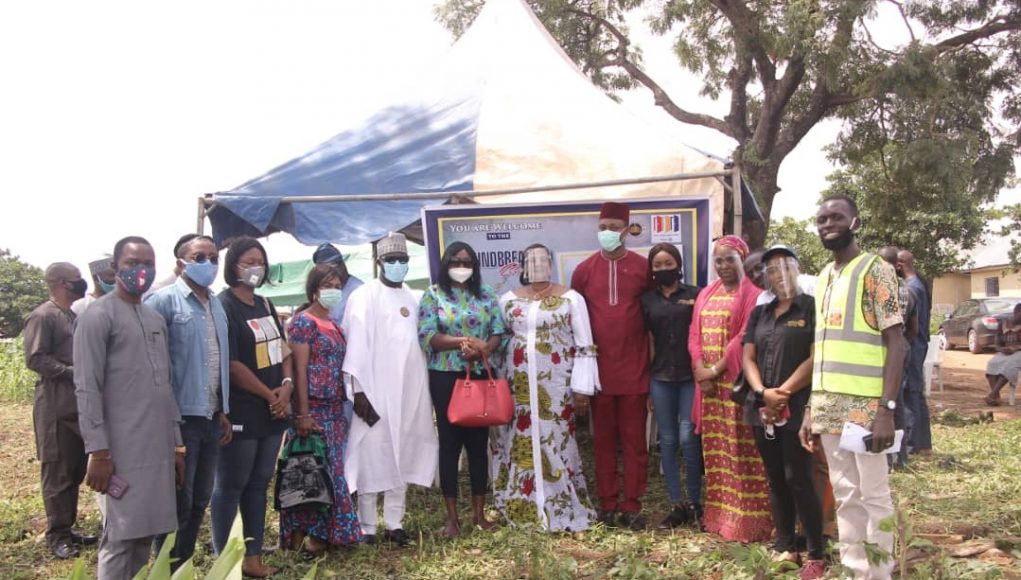 Kpaduma, a community in the Federal Capital Territory Abuja, is one of the abandoned part of the nation’s capital known to have suffered untold hardship.

Though located a street a way from Asokoro, one of the most decorated and sophisticated districts in Abuja, residents of the community have been without a single healthcare facility to address the myriad of health related issues that unfortunately, have claimed numerous lives.

A Chiefdom with seven communities, the over 10,000 residents of Kpaduma have reached out to government through every means possible to ensure access to healthcare, potable water, constant electricity and good roads. However, government have continued to turn a deaf ear to their pleas.

Recently, Rotary club of Abuja, District 9125, carried out a ground breaking ceremony to build a Primary Health Care Centre (PHC), that would attend to the basic health needs of the people.

The residents who received news of the proposed clinic with excitement, narrated gross tales of how they have suffered in a bid to access health care.

According to them, a number of the residents; women, men and children, have died due to lack of timely access to healthcare, including the chief of the community, who recently passed on. The figures especially the maternal mortality rate, increased during the recent lockdown occasioned by the COVID-19 pandemic.

Although it will cost N200 to access the nearest public hospitals which happens to be Asokoro or Karu General hospital with a motor cycle, it costs as high as N2,000 and more conveying emergency cases to these same hospitals in a vehicle.

Monica Asuquo who cited several instances of women in the community who have died from pregnancy/ child birth complications in a bid to access healthcare, said most women were scared of getting pregnant.

According to her, due to the distance and limited resources, majority of women do not register for antenatal care at the closest public hospitals Unfortunately, when women under this category develop complications, getting care at the hospitals becomes pretty difficult, most times leading to preventable deaths.

No little wonder Frina Joe said she was no longer giving birth to avoid losing her life due to the complications that usually tag her pregnancies.

“After two children, my husband and I resolved to put an end to child birth. Not because we didn’t want more or due to scarce resources, but because of the stress of accessing healthcare.

“Pregnancy for me comes with all sorts of ailments and issues; many women in this community have died due to pregnancy related complications of which they would have survived if we had a health facility at our disposal.”

“Sometimes before we get to Asokoro either the child, the mother or both may have died. Also, a lot of women are rejected at Asokoro because they didn’t register for antenatal with the hospital. Majority of the women do not have money for transport so they carryout their antenatal at the chemists we have around,” Fina lamented.

But these patent medicine stores commonly known as chemists, are not certified to provide quality health care. To worsen the situation, they only refer patients to hospitals when a complication goes out of hand. By implication, the lives of the residents are in jeopardy.

Given the location and peculiar situation of the community confronted with poverty and a high rate of crime, these residents are at the mercy of patent medicine stores and may just be exposed to wrong drug prescriptions and treatments.

Disturbed over this ugly trend, Elizabeth Itodo has appealed to the FCTA and relevant agencies to monitor and regulate operations of patent stores in Kpaduma, in order to flush out the quacks and safe guard the lives of the residents.

“Drug agents should visit all communities because some chemists are quack. Even when they know there’s a complication in delivery, rather than refer you immediately they keep you till your situation gets out of hand. The painful part is when you eventually get to the hospital, there’s a high tendency of being rejected.”

Fortunately, the narrative is about to change, as Rotary club of Abuja, District 9125, recently carried out the ground breaking ceremony for a primary health care centre strategically located at Kpaduma 3, for easy access by the seven communities in the Chiefdom.

Excited about what she described as “a life changing project,” the District Governor, Jumoke Bamigboye, noted that the intervention falls within Rotary’s area of focus on disease treatment and prevention.

Completely shocked the first time she heard Kpaduma did not have a healthcare facility, Bamigboye couldn’t stop thinking about the many health issues and the devastative effects it must have had on the residents especially pregnant women, and the community as a whole.

According to her, the PHC which might come along with potable water, would bring succour, better health and employment opportunities to the community whose cries have gone unheard for so many decades.

“They don’t have any medical facility and need to travel, am also worried about women have to travel that far to Asokoro to deliver. We are seeing how we can give them water to go along with this.

“This health facility we are bringing to them will reduce the high cases of maternal and child mortality here and also impact meaningfully on the community by way of employment; we will engage the people around here for the nonprofessional jobs.

“This is one project I am so happy about because we want to embark on projects that will impact on the communities and not just projects for projects sake. I am so happy this President thought about this life changing project; its actually going to change a lot of lives here and at the end of the day, the community is going to be better of.”

The District Governor who believes allowing communities to handle projects is the best approach to its sustainability, said an MoU has already been signed to ensure smooth running of the project during and after its completion.

“When a community accepts ownership of a project, it is easy to sustain. We won’t have to look for external people to maintain the place. When we are done, we will hand over the project to them and they are willing to take it as their own.”

Clustered around some members of the Rotary club, women in the community could not hide their excitement; already, they are counting the time and days when they can begin to enjoy unrestricted and unlimited access to quality health care services few kilometres away.

But they may have to wait a little longer, as
President Rotary club of Abuja Federal, Dr. Patrick Ezie, has said the project would take at least a year to be completed.

According to him, providing care to about 10,000 persons from seven communities within the Kpaduma geographical zone was a great choice as it means a lot to Rotary whose focus is on humanity.

“Each community in Abuja has its peculiar issues however during the pandemic lockdown, we reached out to all communities under our jurisdiction.

“Kpaduma has a population of over 5,000 however during the lockdown they couldn’t access any health care facility and so, there were lots of maternal mortality and other deaths within that period due to lack of access.

“Also, the women and community members were complaining, we were seeing a lot of children without access to immunisation vaccines because there was no PHC to store the vaccines. Due to all of these the club decided to put a PHC clinic at the minimum to provide some form of health care.

“People here need help, they are the most abandoned in society. Its a one year project, we will ensure people in this community get the care that they need.”

Although one of the many prayers of Kpaduma has been answered through Rotary club, government still has a huge role to play by making necessary consumables especially vaccinations, available for children immunisation.

Recently Nigeria finally got certified wild polio free by the World Health Organisation (WHO). For Rotary, this means a lot haven devoted so much time, energy and resources to make this dream come true.

However, the District Governor, Jumoke Bamigboye, has warned against reduced focus on routine immunisation to avoid a possible reemergence of polio in Nigeria.

“Its not over yet for as long as any part of this world is polio endemic, its a risk. What we need to do is to consciously monitor to ensure immunization programmes are being followed and every child is vaccinated

“As long as we are going to be having children, we must make sure they receive vaccinations; that is the only way to maintain this status but if we go to sleep or become complacent because we have been certified polio free, it will hit us when we least expect.”