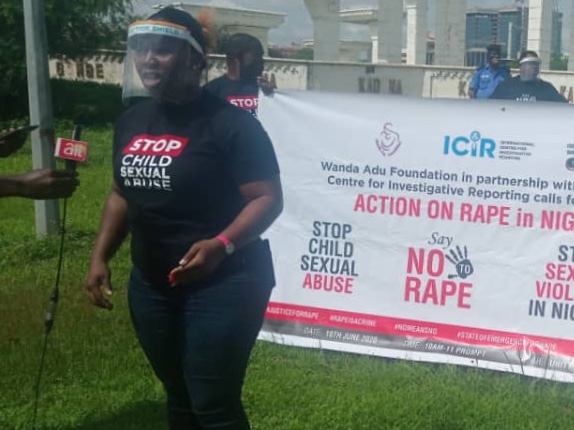 A Civil Society Organisation, Wanda Adu Foundation, has called on the Federal Government to consider enacting a law that will ensure rapists and child sex offenders undergo chemical castration.

The Foundation, which also advocated death penalty to curb the alarming cases of rape crimes in the country, said only a harsh penalty would send strong signal to perpetrators of the heinous acts.

Chemical castration does not involve removing a person’s testicles but entails the injection of a hormone blocking-drug that would render the testicles irrelevant and decrease libido to its lowest level.

President and Founder of Wanda Adu Foundation, Wanda Ebe, made the call in Abuja on Wednesday during a protest against the rising number of rape cases in the country.

“Death sentence is what we ask for, there is a case of a four-year-old child who was raped and all her internal organs gushed out from her vagina. Look at the cases of Uwa and other several rape and murder cases. Rape is a murder, it is killing even if you are not dead physically, emotionally or mentally you are dead. So there should be death penalty or chemical castration for every rapists,” she said.

The protest, which attracted dozens of persons who marched around Unity Fountain, Maitama, Abuja, with various placards denouncing rape and sexual violence, was organised by Wanda Adu Foundation in collaboration with the International Centre for Investigating Reporting (ICIR) and Institute for War and Peace Reporting (IWPR).

Speaking at the event, the visibly-angry Wanda lamented that rapists and child sex abusers are being treated with kid gloves with many walking free on the streets. She called on the government to live up to its responsibility of protecting its citizenry, especially the female folks.

“We don’t want rape any more, incest-family members abusing children we don’t want it, our women are not saved anymore, we seek justice, protect women, protect the girl-child,” she said.

While calling on government at all levels to ensure consistency in the punishment for rape cases, Wanda said women should be given the opportunity to decide the penalty that should be dished out to sexual crimes.

Her words: “The government should have a consistent sanction, consistent sentencing, not that in a whole year we have 1,000 rape or child sexual abuse cases and we get justice for only three or five. It means that it is okay to rape, it means it is okay to sexually abuse children.

“Government should also partner with relevant stakeholders, train the police, and tell them what to do. The citizens deserve to know the kind of training our police are receiving because we are also experiencing blaming and shaming of victims when we take cases to several (police) stations, that should not happen.

“Government should give opportunities to women in leadership to take decisions. What sanctions do we need? The men are being biased about it because several of them are molesters, several of them abused children. Let the punishment of rape be decided by women.”

Identifying with the protest, Lemmy Ughegbe, Director Communication and Advocacy, Make A Difference Initiative, said rape which used to be a ‘virus in Nigeria’ has now become epidemic that is threatening the future generation.

“That means the statistics of UNICEF in 2015 is now a joke because we now have three or more times of the situation in 2015,” Ughegbe said even as he called for a law that will totally address the problem across the country.

The LABOUR reports that some of the placards displayed by the protesters, who were clad in black include, Stop Child Sexual Abuse, Stop Rape and Murder, Women Have Rights, among others.