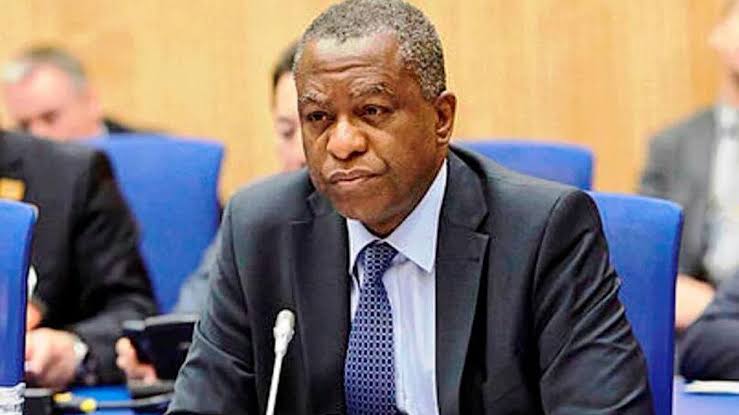 *** As Ocheni Reacts To Allegation

The emergence of a career ambassador nominee, Mrs. Regina Ingekem Ocheni is being questioned over her alleged breach of Nigeria’s civil service rules and regulations.

President Muhammadu Buhari had in a letter dated May 6, 2020, and addressed to the Senate President, Ahmad Lawan, nominated 42 career ambassadors across the 36 States of the federation for screening and confirmation.

A reliable source informed The Labour that President Buhari was deliberately misled by the Minister of Foreign Affairs, Mr. Geoffrey Onyeama into nominating Mrs Ocheni as a way of doing a favour to Prof. Ocheni who was Onyeama’s colleague in the cabinet.

“One thing is clear, the Hon. Minister of Foreign Affairs, Geoffrey Onyeama, deliberately misled President Buhari in the nomination of Mrs. Ocheni on the ground that he (Onyeama) was determined to assist the wife of his former cabinet colleague, Prof. Stephen Ocheni at the expense of a seasoned officer who has laboured diligently for about three decades. Or is it that Mr. Onyeama did not have access to the appropriate records of his officers before he sent the nomination to the presidency?,” the top Ministry official wondered.

The source, however, added that the wrong could be corrected by substituting Mrs. Ocheni’s name with the most senior officer from Kogi State in the Ministry.

According to a petition dated May 14, 2020, and addressed to the Senate President, Dr. Ahmad Lawan, Mrs. Ocheni whose husband, Prof. Stephen Ocheni was the immediate past Minister of State for Labour, hails from Cross River State as against her claim of indigeneship of Kogi State.

The service-wide extant regulation authored by the Federal Character Commission, stipulates that an officer is prohibited from claiming the State of Origin of her spouse for the purpose of any appointment in Nigeria’s public service.

In the petition to the Senate President, obtained from the National Assembly by our correspondent, the upper legislative chamber was urged by the petitioner, Mr. Adam Umar Bako, who is the most senior career officer from Kogi State at the Ministry, to reject the nomination of Mrs. Ocheni which was described as a “flagrant breach of laid down rules and regulations in Nigeria’s civil service.”

According to the petition, Mrs. Ocheni violated a circular of the Federal Ministry of Foreign Affairs, which directed all officers laying claim to their spouse’s state of origin to revert to their indigenous state on the strength of the Federal Character Circular dated March 1st, 2011.

“This rule she (Mrs Ocheni) has infracted upon and indeed has gone to arrange a local government indigeneship certificate in response to the ministry’s circular Ref No: 2/AS.285/S.139 dated 13 February, 2020, that demanded all officers claiming their husbands’ state of origin to revert to their indigenous state, the petition disclosed.

The Labour equally learnt from an impeccable source at the Ministry of Foreign Affairs who did not want his name in print that Mrs Ocheni’s attempt to get accredited for appointment of Permanent Secretary exercise was denied as a result of her refusal to present her First School Leaving certificate, which would have revealed her true indigenous state of origin being Cross River.

The petition also revealed that Mrs. Ocheni’s entry into and promotion at the Ministry of Foreign Affairs was characterized by monumental irregularities.

Our correspondent’s investigations at the Ministry further revealed that Mrs. Ocheni’s husband was the Director of Finance and Accounts (DFA) at the time of her alleged fraudulent recruitment.

In the petition authored by the most senior officer in the Ministry of Foreign Affairs from Kogi State, Mr. Adam Umar Bako, the petitioner lamented the grave injustice being done to him by presenting Mrs Ocheni’s name in place of his having put in about 30 years of meritorious service to the country’s foreign service compared to Mrs. Ocheni who only joined the Foreign Affairs Ministry less than 10 years ago.

“It will also trouble you to know that Mrs. Ocheni did not in the first place deserve to be in the Foreign Service for want of requisite qualification as provided for in the scheme of service.

“She possesses an HND certificate in Secretariat Study…More troubling is the fact that at the time she joined the Foreign Service, the law harmonising HND and First Degree had not been passed and assented to, therefore, she could at best have been on Grade Level 14 which was the bar for all HND holders as at then. The crucial and worrisome question is, how did she come into the service on Grade Level 15 without additional qualification?,” he queried.

Meanwhile, Mrs. Ocheni has declined to comment on the issues raised against her nomination. As at 12noon on Wednesday when our correspondent visited the Tafawa Balewa House, headquarters of the Federal Ministry of Foreign Affairs in Abuja, where Mrs. Ocheni sits as the Director of Training and Staff Welfare, she based her decision not to speak to the press on a civil service rule that bars civil servants from granting media interviews.

In her words: “I guess you know the civil service rules concerning speaking to the press. We are not allowed to talk to the press. As far as I’m in this office, I’m not allowed to make any statement concerning the issues you have asked me about.
“That is why we have a press office with someone in charge, that is, the spokesperson for the Ministry… So, you can go to the press unit for your enquiries. So, I have nothing to say,” Mrs. Ocheni said.

Subsequently, our correspondent approached the spokesperson of the Ministry of Foreign Affairs, Mr. Ferdinand Nwonye, who said he was not mandated to speak on the matter as he was not on the selection committee of the Ministry for the ambassadorial nominees.

“I was not on the selection committee of the ambassadorial nominees, so I cannot speak on the issues you have highlighted concerning the Honourable Minister and Mrs. Ocheni,” Mr. Nwonye said.