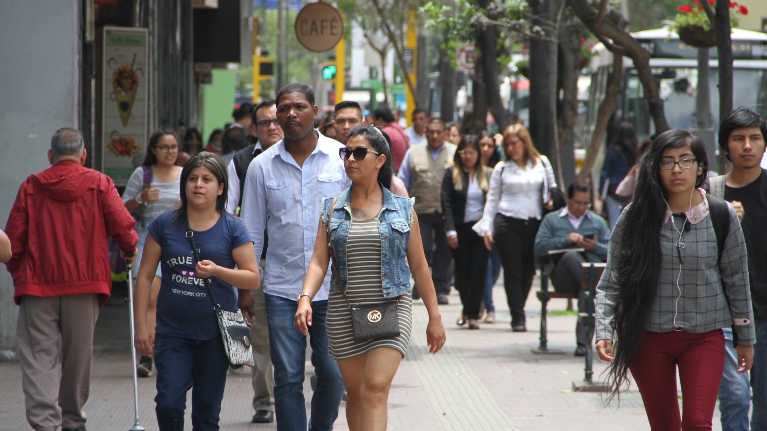 A modest rise in unemployment at 8.1 per cent marks a labour outlook that is not positive, and could deteriorate this year if economic growth remains weak, says a new report from the ILO Regional Office for Latin America and the Caribbean. More than 25 million seek employment and do not find work in a region that faces growing demands for greater opportunities and equality.

“The labour market situation is complex,” said Mr Juan Hunt, Regional Director a.i. of the ILO Regional Office for Latin America and the Caribbean, while speaking during the report launch event in the Peruvian capital.

The estimated average regional unemployment rate for the end of 2019 is 8.1 per cent, compared to the 8.0 per cent rate for 2018. While the increase is small, it still means that more than 25 million people are actively looking for employment and they are not finding work.

This upward trend in unemployment could increase and reach 8.4 per cent in 2020 if the region continues to experience moderate economic growth. The latest Economic Commission for Latin America and the Caribbean (ECLAC) estimates place the average growth of 2019 at 0.1 per cent and forecast a low level for 2020 of 1.3 per cent.

The report emphasizes that there is an upward trend behind the regional average unemployment rate. The rise in unemployment was predominant in nine of 14 Latin American countries. In the English-speaking Caribbean, on the other hand, there was a decrease in unemployment by 0.7 percentage points.

The Labour Overview also highlights the relevance of Brazil and Mexico in the regional average. It notes that without including these two countries, the average unemployment rate would register a more pronounced increase of 0.5 per cent, according to the data as of the third quarter of 2019.

The report adds that despite the continuous increase in women’s labour participation, which reached 50.9 per cent in the third quarter of 2019, it is still more than 20 percentage points below that of men, which is 74.3 per cent.

In 2019, female unemployment rose 0.2 percentage points in the regional average, to 10.2 per cent, while that of men remained unchanged at 7.3 per cent. This indicates that the increase in regional unemployment disproportionately affected women.

The situation of youth in the region is alarming. In the third quarter of 2019, the regional unemployment rate was 19.8 per cent, which implies that one in five young people in the labour force cannot find employment. This is the highest level recorded of that rate in the last decade.

“The lack of decent work opportunities for young people causes great concern because it is a source of discouragement and frustration. This has been reflected in the front line of recent protests in the region, calling for changes to aim for a better future,” said Mr Hunt.

The ILO Regional Director also emphasized that recent demonstrations in the region by citizens calling for better opportunities and greater equality are evidence of the persistence of decent work deficits.

“Opportunities to access decent and productive employment, with fair wages, social inclusion, social protection and labour rights, are key to responding to social demands. They also ensure that the benefits of growth reach everyone and guarantee good governance,” said Mr Hunt.

Speaking on the employment quality findings included in the report, Mr Hugo Ñopo, the ILO Regional Economist who coordinated the Labour Overview, explained that, “the dynamics of economic slowdown since mid-2018 have had an impact on the structure and quality of jobs.”

Ñopo stressed that since 2018 there is a lower growth in salaried employment compared to self-employment, especially non-professional employment. He also emphasized that these are signs of “a relative instability of the jobs that are being created in Latin America and the Caribbean.”

The report also states that there is a tendency to increase in the indicators of under-occupation due to insufficient working time. The percentage of employed people who work less than 35 hours and want to work more increased in 10 of the 11 countries with available data.

Referring to the economic slowdown experienced by the region in the last year, Ñopo warned that “the impacts on the labour market are not yet fully reflected”, due to the lag in the demand for employment.

The ILO specialist stated that the challenge for the countries of the region is clear: “integrate the more than 25 million unemployed and give decent employment to an even greater and diverse number of people who are hoping to benefit economically.”