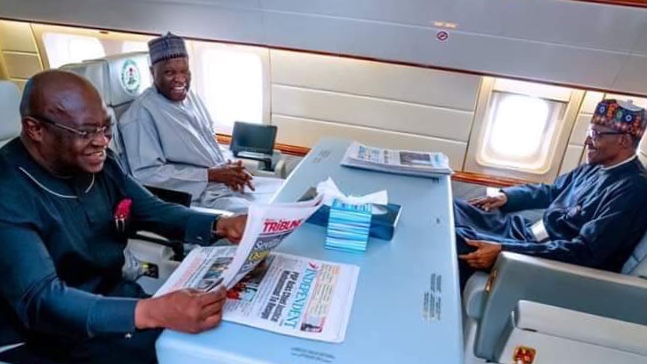 For Timi Frank, the disgraced former Spokesperson of the All Progressives Congress (APC) and a strange-bed fellow in the People’s Democratic Party (PDP), there is time for only one thing – time to seek personal comfort and self aggrandizement.

For this reason, he was sacked as the APC Spokesperson, after his errand boy role in the league of politicians that blackmailed the Goodluck Jonathan and PDP led presidency, paving the way for President Mohammad Buhari and APC presidency, expired. Obviously, he was merely used and easily discarded. He was not worth more than that!

Evidence that he was never a member of the PDP, Timi did not speak as a faithful party man, but as a job-man, hiding under political activism.

It is therefore trite to conclude that he was truly a strange bed fellow in PDP prior to the 2019 general elections, whose only interest was what to gain in the Atiku Presidential ambition, which leaders of the party like Governor Okezie Ikpeazu worked genuinely hard to ensure was a success.

It is difficult to place why a Timi Frank, who was anonymous and unable to deliver PDP even in his ward in Bayelsa State during the last presidential election which PDP lost to APC, will try to vent his unguarded spleen on Governor Ikpeazu who has remained a committed member of the PDP.

Governor Ikpeazu is not just a member of the PDP in Ward 7, in Obingwa LGA of Abia State, he is the leader of the party in the state and one of the national leaders of the party. A committed and trusted one at that.

He was first elected Governor by Abians on the PDP platform in 2015, when Timi and his cohorts were busy frolicking in APC. In 2019, Governor Ikpeazu was re-elected by the Abia electorate on the same PDP platform. So, his primary assignment and loyalty is first to Abians, who employed him before even the platform.

As earlier said, according to the Bible, for everything, there is a time. The time for frontline party politics is over, the time we are in now, particularly for Governor Okezie Ikpeazu in Abia, is the time for governance. I hope Timi understands this?

The arrangement for this trip had long been concluded before the controversial and unfair ruling of the Supreme Court that sacked Rt. Hon. Emeka Ihedioha as Governor of Imo State took place. It was the sad judicial development that provoked the emergency PDP NEC meeting at about the same time Governor Ikpeazu was airborne to the UK.

In case Timi is not aware, Governor Ikpeazu is not on the President Buhari-led delegation to the
maiden UK- AFRICA INVESTMENT SUMMIT holding in London because he wants to enjoy the comfort of the presidential jet, but the Scholar-in-Governance Governor of Abia State is on the delegation because he is the bearer of one of the most important reasons Nigeria is part of the summit – the Enyimba Economic City Project.

Recall that in 2018, the Federal Government and Abia State Government signed Definitive Agreements for the Enyimba Economic City Zone Limited.

The signing took place at the Presidential Villa and the Federal Government was represented by Nigeria Special Economic Zone Company.

President Muhammadu Buhari, who witnessed the signing, commended Governor Okezie Ikpeazu for initiating the Project, and thanked the Abia State host communities for their commitment to the it.

The President further assured the people of Abia State and other Nigerians of the Federal Government’s support and cooperation towards similar projects anywhere in the country.

He said such initiatives were exactly what his administration was desperately looking for to create employment for the populace and boost the nation’s economy.

So, the inclusion of Governor Ikpeazu on the delegation to the maiden UK-AFRICA INVESTMENT SUMMIT in London, is another opportunity for Nigeria, through Governor Ikpeazu, to speak to the world about the Enyimba Economic City project, and why their buy-in is necessary.

At the UK summit, the British Prime Minister, Boris Johnson, will be hosting African leaders, International Business Chief Executives and Heads of International Organizations, to create new partnerships that will deliver more investments and jobs to the benefit of people and businesses in African countries and the UK.

Governor Okezie Ikpeazu, as the initiator of the Enyimba Economic City project will speak to selected potential investors, on the invitation of the Department for International Development (DFID), on the need to key into the project situated in Aba.

Recall also that in November 2019, Governor Ikpeazu secured the nod of the African Development Bank (AfDB), private investors and other multilateral financial institutions for the investment of $430 million to fast track the development of the first phase of Enyimba Economic City, at the Africa Investment Forum (AIF) that held in Johannesburg, South Africa.

The city is a proposed free-trade zone, with independent business registry, labor law, banking regulations and more. It is located on over 9,500 hectares of land in the oil producing communities of Abia State, between Aba and Port Harcourt.

Many participants at the South African forum agreed that Enyimba Economic City is a project worthy of their commitment and demonstrated their willingness to invest in the City.

The UK- AFRICA INVESTMENT SUMMIT has presented, yet, another opportunity for Governor Ikpeazu to speak, expound and present the Enyimba Economic City project at the world stage.

Much as Governor Ikpeazu is not responsible for Timi’s unguarded spleen, no leader would prefer to attend a party meeting to attending a Summit where his ideas and programs for his people will be beamed at the global stage. I can assure Timi Frank that even the PDP is proud of this City, being the brainchild of one of its leading stars.

Indeed there is time for everything.