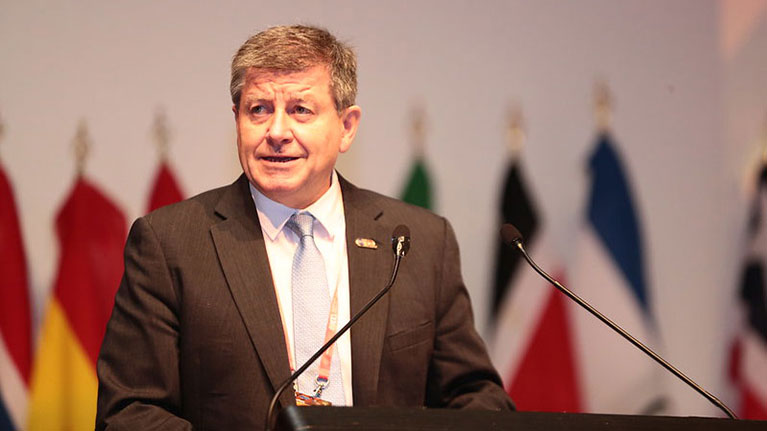 The International Labour Organization (ILO) Director-General, Guy Ryder, has again called on African leaders to seize the rich resources and human capital opportunities that exist on the continent to advance towards a human-centred better future.

Mr Ryder, stressed the importance of ‘human-centred’ approach to ensuring a sustainable future for all as outlined in the ILO Centenary Declaration for the Future of Work that was adopted at the International Labour Conference (ILC) in June 2019.

Human-centred’ approach is based on investing in people’s capabilities, the institutions of work that ensure that labour is not a commodity, and in decent and sustainable work, particularly in the green, rural and health care economies.

Ryder, who made this call in Abidjan, Côte d’Ivoire, at the opening session of the ILO’s 14th African Regional Meeting, where the ILO’s tripartite constituents representing governments, workers and employers from 54 African countries gathered to deliberate on the future of work, further said that 26 million jobs is needed to be created yearly in Africa to grantee a sustainable future.

On the possibility of a better future of work and life for Africans, he said; “Africa has every reason to regard the future with confidence. Young, rich in resources, dynamic and creative, it offers possibilities which in many ways, do not exist in other regions. However, as always, there are challenges.

“Among these is the need to create twenty-six million jobs every year in Africa to meet the objectives of the UN Sustainable Development Goals.”

Other challenges he said, include a social protection financing gap amounting to 68 billion US dollars a year; economic, social and migratory pressures; and the impact of climate change and globalization.

Also, he made reference to projections for economic growth in Africa. Saying that the continent has a ‘demographic dividend’ that will see labour force numbers rising to 60 per cent. And also added that Africa’s unique potential for creating renewable energy; and opportunities for development could be opened up by advances in technology.

Further in his remarks, he clearly stated; “What we seek is a future of work with social justice as the surest guarantee we can have of peace and prosperity in African and in the world. This is the unfinished business of our 100 year old Organization which we must take forward together.”

Furthermore, Ryder specifically outlined particular priorities for Africa, to include; “The formalization of the informal economy, which accounts for 80 per cent of the workforce, The structural transformation of production, Economic diversification, Creating an enabling environment for the creation of decent jobs, Tackling inequality, Actions to promote full and equal participation of women in the labour force.”

He also called for accelerated action to implement the UN Sustainable Development Goals, the Global Compact on Safe and Orderly Migration, as well as promises made by governments to tackle climate change.