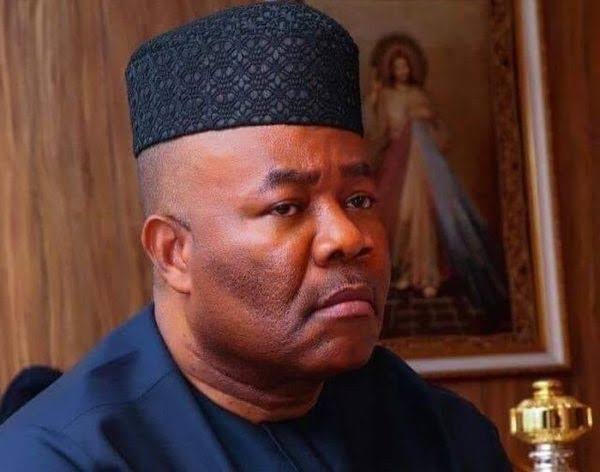 Against its earlier demand that Senator Godswill Akpabio be redeployed to another federal ministry over allegations of flouting the rule of law in handling the affairs of Niger Delta Development Commission (NDDC), the entire ex-militants from the Niger Delta region, have pleaded with the presidency to ignore all sack demands against the Minister of Niger Delta.

The ex-militants also stated that its plea for Akpabio to continue as Niger-Delta minister was predicated on their new knowledge that the Senator never had hands in the issues it earlier thought otherwise. They also added that he, Godswill Akpabio is the only one who has the magic wand to turn around the fortunes of the coastal zone for the good of the people.

Disassociating the Minister from the recent controversy in the Niger Delta Development Commission, they stated that facts available to them indicated that Akpabio did not mastermind the tranfer of the Commission’s administrative powers from the presidency to his ministry.

On the recent court of appeal judgement which ordered a rerun in the Akwa Ibom North West Senatorial District election in which the minister is a candidate, the ex-militants appealed to Akpabio not to run, saying he was more useful to the people of the Niger Delta being in the ministry than the Senate.

According to a press statement issued under the aegis of “Coalition of Niger Delta Agitators”, signed by John Dukku and others and made available to Journalists in Abuja on Sunday, the ex-militants noted that they have been well informed of the required issues by Mr Imoh Okokoh, the leader of the beneficiaries of amnesty programme, Phase 2 in Akwa Ibom.

The statement read in parts: “From our investigations and contrary to our earlier belief, the movement of the NDDC from the Presidency to the Ministry of the Niger Delta had indeed commenced practically during the first tenure of the present administration when Godswill Akpabio was serving at the National Assembly as Senate Minority Leader and the immediate-past Board of the NDDC was inaugurated by the then Minister of Niger Delta Affairs, Pastor Usani Usani and not the SGF, signaling that the Commission was indeed under the Ministry of Niger Delta Affairs. Thus, it is very wrong to insinuate that the Minister, Senator Akpabio was the one who masterminded the transfer of supervisory powers to his Ministry.

“Secondly, from every indication, the appointment and inauguration of the Interim Management Committee for the Commission was indeed approved by the Presidency, and not the Minister’s unilateral decision as erroneously believed in many quarters. Therefore, for Senator Akpabio to be wrongfully accused of usurping Presidential powers in doing what was done, amounts to very serious political blackmail and giving a dog a bad name. We hereby withdraw the ultimatum we earlier gave the Presidency to sack the Minister as this will not solve the present confusion and tension that we are having in the region. Rather, going by his antecedents as an astute and stubborn goal-getter, it is our candid opinion that he is our best man and the magic wand we currently have to get the Niger Delta region working.

“The Coalition acknowledges the recent Appeal Court judgement sitting in Calabar which cancelled the last Senatorial election in the Minister’s Senatorial district, and calling for a rerun which is in his favour. However, we appeal to the Honourable Minister to jettison the idea of going for a rerun and rather remain as Minister, as the Niger Delta people need him more than his Senatorial district. The Niger Delta people believe so much in him and really need his services especially at this time.

“While regretting our earlier stance on this issue which we took out of misinformation and ignorance, we call on the various Niger Delta groups and individuals genuinely committed to the Niger Delta struggle, to rally round and support Senator Godswill Obot Akpabio who we sincerely believe will give the Ministry, the NDDC and indeed the entire Niger Delta region the desired positive change.

“We also advise the Presidency to ignore any individual or group attacking the Minister or calling for his removal as they are being sponsored by those who defrauded the NDDC at one point or another and are therefore afraid of the probe that has been instituted.

“On our part, we hereby warn all those calling for Senator Akpabio’s sack to desist from doing so as any further attacks and embarrassment on the person of the Minister, shall be met with stiff opposition and resistance.

“Finally, we wish to assure the Honourable Minister, His Excellency, Senator Godswill Akpabio of our strong support to him. He should, therefore, settle down and work towards delivering the Niger Delta mandate through his Ministry and the NDDC.”