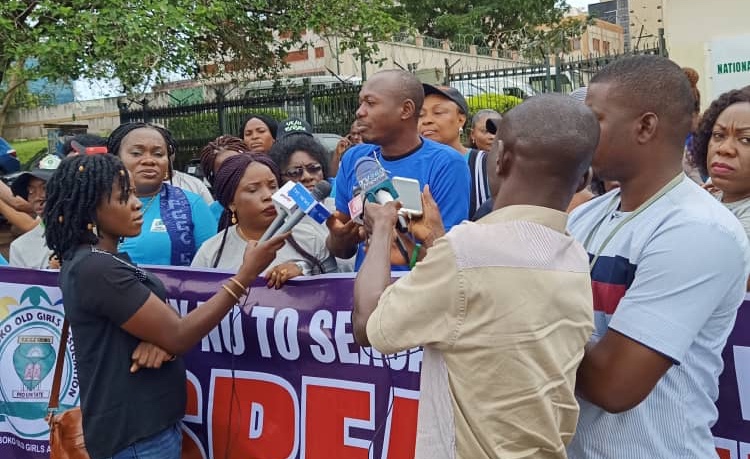 National President of the Federal Government Girls College Old Girls Association, Mrs. Tonia Edi-Lawani, has called on the Inspector-General of Police, Mohammed Adamu, to declare an alleged child molester Victor Ogbuja wanted, over the abuse and subsequent death of Ochanya Ogbanje, a former student of her alma-mater.

Speaking at a media briefing held at the National Human Rights Commission (NHRC) at the end of a peaceful march on Friday, Edi-Lawani said justice would be seen as done, when Victor who is at large is apprehended and charged to court for allegations of the rape of Ochanya, which led to health complications and her death.

She stated that while her association welcomed the arraignment of Andrew Ogbuja , the second accused in case of the molestation and death of the Late Ochanya, at a Makurdi High Court, her association is demanding a timely trial.

“The cry for justice for our late school girl, Ochanya is on, and it is something we will continue to do until justice is done to the convincing of Nigerians.

“We are appealing to the Nigerian Police, the Inspector-General of Police, Mr. Mohammed Adamu, to please see to the arrest and trial of Victor Ogbuja, the other person who has been at large, following his being accused of molesting Ochanya for a long period, leading to her untimely death”.

Edi-Lawani explained that Friday’s walk to the NHRC formed part of the advocacy being carried out through association’s Speak Up/Cry Out against child molestation, which was created to prevent any other student in her alma-mater from suffering a similar fate with the Late Ochanya.

The Executive-Secretary of the National Human Rights Commission, Mr. Tony Ojukwu, who received members of the association stated the commitment of the agency to protecting children from sexual predators.

He disclosed that the commission recently inaugurated a national committee on Gender Based Violence to look into ways of stemming the growing trend of violence against women and girls, following Ochanya’s death and subsequent calls for justice by concerned individuals, Non-Governmental Organizations and other groups such as the Federal Government Girls College Gboko, Old Students Association.

Ojukwu opined that genuine organizations and individuals providing platforms for children to speak up, if they are faced with danger or have been abused should be supported.

“We feel encouraged by your efforts as an association. We are with you in this struggle. Ochanya’s case is one case too many and it is going to be a litmus test for us to look at our laws. The National Human Rights Commission is on top of this case.

“We are monitoring this case and we will ensure that justice is done in the case of Ochanya”, he said.