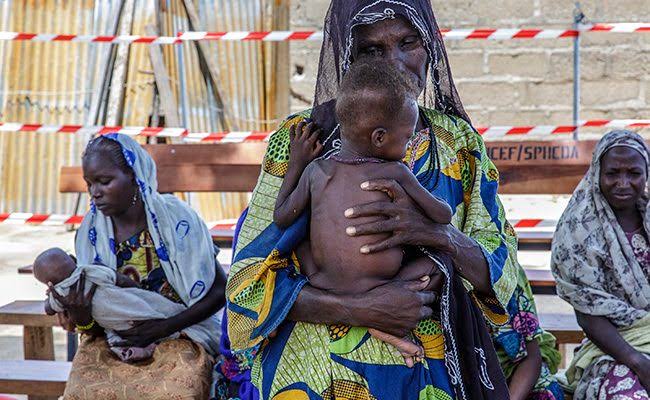 Sanjay Kumar Das, is the Nutrition team lead, United Nations Children’s Fund (UNICEF). In this interview, he gave a first hand picture of nutrition situation gathered in his three years of extensive work in the North East Nigeria. Even as he insists that Nigeria government must meet the funding gap to address the pathetic state of malnutrition affecting children I the region. REGINA OTOKPA
Gina Otokpa reports.

What is the state of child malnutrition in the Northeast especially Borno State?

It’s still in a horrible and pathetic state that requires urgent local and international attention. In fact, the nutrition situation in the region has long assumed emergency situation and there is need for collaborative effort to salvage the lives of children in the northeast particularly Borno state. One way of doing this is urgently scaling up nutrition intervention to rescue the situation.

What are the factors responsible for the high indices of malnutrition in the North East?

It’s a cumulative effect of many factors. Although there have been cases of malnutrition in the northeast, it has been worsened due to the prolonged activities of Boko Haram insurgents resulting in the destruction of communities, farmlands and other sources of livelihood, thereby forcing thousands of people into different Internally Displaced Persons (IDP) camps with poor living conditions.

Many of the farmers have deserted farming due to the security issues and If they don’t farm the result effect is inadequate food at the household level and in the region.

Another major factor is inadequate health services in the region. Majority of pregnant women and low birth rate children who are already malnourished, are unable to access health services such as constant checkup because many of the health facilities are still not functional because the Infrastructure have been damaged.

Inadequate Water, Sanitation and Hygiene (WASH) and disease outbreaks, are some of the other factors contributing to malnutrition and so even after we treat and discharge them, in the next five to six months they may come back with severe malnutrition because they were not feeding well when they went back home due to inadequate food.

The worst thing is that people in these places are illiterates who have poor knowledge of hygiene and diet. They don’t take hygiene serious and that has been responsible for periodic disease and epidemic outbreak.

Are these many factors reasons why the situation has been tagged as an “emergency”?

There is global threshold and other parameters used by the World Health Organisation (WHO) to determine whether a country or a particular location has nutrition emergency.

Not only are these parameters in the three northeastern states, they have reached the global threshold. Once the malnutrition record of children under the age of five reaches 10 percent, WHO declares nutrition emergency in that country or location.

This indicates a high level of malnutrition in Borno and Yobe states and more investments is needed to address this problem to bring it to an acceptable level.

How does this problem of malnutrition affect children in the North East?

Malnutrition poses a serious problem for the socioeconomic development of the nation because it damages the brain of the children and when their brain is damaged it will affect their school performance because their cognitive development has been reduced as such, they lack skills, good innovative knowledge to do something for themselves , their families, their community or the nation.

How are you helping to address malnutrition in these states?

Our interventions and that of other local and international partners, and the states government have been effective and can be seen in the improved records available.

We are working in two directions; to prevent new malnutrition cases and at the same time when the child has become malnourished we arrange services for them to start treatment to save the lives of those children because if we cannot provide treatment on time those children may die.

In all these process we are closely working with state primary health care development agencies, our partners in borno state with the support of DFID who are our donors.

In last two years, we have seen a consistent drop in the number of SAM cases. In 2018, an estimated 440, 000 boys and girls of under the age of five in three northeast states of Borno, Adamawa and Yobe, suffered SAM. In 2019, we projected an estimated 317, 000 to suffer SAM. The figure is expected to drop to 258, 950 children in 2020. Obviously, the figure has been on the downward trend and that could be attributed to increased access to drugs, hygiene and Ready for Use Therapeutic Food (RUTF) which had played great role in improving the nutrition in the war ravaged areas. We are hopeful that more children wont not fall back into SAM after treatment and that is why we need to extend care so that new cases will not come on board.

How many SAM children has these interventions treated in these states?

How do you intend to address the alleged misuse or sale of the RUTF by mothers and other caregivers?

We don’t have any documented record for this but sometimes we see the RUTF being sold in shops and in the market. This is largely because the mother and care givers are illiterate and do not understand that the RUTF will save their children’s life, improve the cognitive development of the child and improve their school performance. If she knows that importance of RUTF in a malnourished child, she won’t even think of doing that. She will take the matter seriously and judiciously administer the RUTF to the child.

Sometimes the situation is that they don’t have food in the house so they just compromise among themselves. The problem is that even if we catch any care giver selling RUTF, we cannot stop giving them RUTF because it will affect the children, the children may die so we are in a dilemma situation. However, we are partnering with community and religious leaders to monitor and control people that are allegedly engaged in such act.

Do you think the government is doing enough to support funds from donor agencies to tackle malnutrition?

Although there are some kind of support from the government, more support is needed from them to address the serious problem of malnutrition because it is a complex issue that cannot be solved by one sector or donor agencies alone. Collaboration, hard work, better planning and allocation of resources is needed to tackle this problem.

What challenges have you encountered in delivering services?

We have so many challenges in delivering services; security is still volatile sometimes it impacts on our services in some of the remote areas in Borno and Yobe. We are trying to strengthen our preventive component of malnutrition so that there won’t be so many new cases coming up but it is taking more than we thought. We are not getting adequate funds on the mission programme and it is affecting the malnutrition status

How much do you think is needed to address this issue of malnutrition?

For the comprehensive programme we need around N5 billion for 2020. We have 258,000 children we are expecting to be severely malnourished in 2020 and for the prevention part we are targeting about about 771,000 care givers of children under two years.