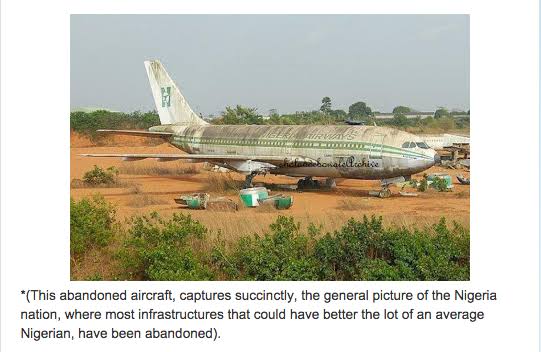 It appears that many celebrated achievements of successive governments in Nigeria are not effectual to the wellbeing of the citizens. And in the light of this, many are of the opinion that any government achievement that is not sustainably fruitful, or positively impactful to the life of the citizens is tantamount to a waste of energy and resources.

Presently, it seems that policies and programs that have produced nothing tangible are being celebrated in Nigeria, while many of the celebrated achievements are apparently no where to be found, even as the few that actually exist are not functional.

Unfortunately, this unpalatable phenomena that is evidently a hindrance to a progressive development, which is an elixir to Nigeria’s woes, is condemnable. This is because it is not far from the truth to say that those that initiated, worked and so to say achieved the said ghost achievements did not lay any sustainable foundation for them. They also were neither foresighted to plant real developmental seeds that would germinate and subsequently pave way for the country’s development, as in the case of China, India, Indonesia etc (countries Nigeria were at par with).

Recently, the Assistant Director-General and Regional Director for African of the International Labour Organisation (ILO), Cynthia Samuel-Olonjuwon, said at the Global Youth Employment Forum organized by ILO in Abuja, that not having an effective score card mechanism in governance system, through which the performance of presidents, ministers, general managers, director generals of various parastatals and what have you in Federal and State level in Nigeria and other African countries, is a factor number one against true achievement which translates to development.

Linking her point to the issue of unemployment and its challenges, she said that labour ministries and it parastatals across Africa that are responsible to handle and proffer matching solutions for government to follow in tackling the menace, are weak in their operations because they are treated as third and fourth tier ministry, which she said was a holistic nonperformance deficit in the part of the major egg-heads of government.

Baring his mind on the subject matter, Mr Emenike Ikedichi Ubani, a Mass Communication Lecturer in Abia State University said; “Misunderstanding policy statements and programs schedules for achievements, weakness in operation, absence of performance score-card and will power to make necessary changes when progressive and visible achievements are lacking , could be a serious bane to an individual, organization or country that aims at having progressive achievement vis-à-vis sustainable development.

“And with the reality on ground in the case of our country, one can only imagine how possible it is, and would be for there to be a progressive achievement that should translates to a sustainable development in Nigeria, if the trend continue.”

He went on to allude that “Performance is key and should translate to an impactful achievement, and achievement should be progressive. Once achievement is progressive; the end product would be a sustainable development for the betterment of a country and its people.”

Speaking of achievements, the Minster of Labour and Employment, Sen. Chris Ngige, in a valedictory address he presented on Monday the 27th of May, 2019 to mark the end of his first appointment, stated his achievements to include “new minimum wage, maintenance of industrial peace and harmony” among many other things.

While he went on to highlight some industrial disputes involving different labour unions the ministry under his watch resolved, he revealed that; “From 2015 to date (27 May, 2019), the Ministry apprehended 1,425 trade disputes and complaints, with 788 disputes completely concluded and resolved, 37 cases referred to Industrial Arbitration Panel (IAP), and 600 pending at various stages of mediation and conciliation.”

In what seem to be announcement for another achievement, he said, “In consonance with section 3 of the Trade Union Act, 2004 Cap T.8, Laws of the Federation of Nigeria, and following a recent judgement of the National Industrial Court, the old Nigeria Union of Pensioners (NUP) was regrouped for effective delivery of services to Pensioners with the additional creation of the Nigeria Union of Contributory Pensioners (NUCPN) to cater for contributory pensioners and the Parastatals and Private Sector Pensioners Association (PPSPA) to take care of pensioners under that bracket.

“The old Nigerian Union of Pensioners (NUP) now takes care of only non-contributory pensioners from the federal ministries and the public service in a regrouping -for- efficiency exercise as per the powers conferred on the Honourable Minister by that section of the Act.”

Talking about achievement which should be progressive and sustainable if the development needed in Nigeria must come to be, minimum wage was one of the listed achievements of the Minister. But there is presently a wild wind of industrial dissonance over its implementation, which my lead to a total break down of industrial peace in the country. Also, the new pensioners’ unions the Minister listed in his valedictory speech are yet functional.

Going by his last valedictory achievement speech, would the Minister of Labour and Employment maintain the good record of his scorecard performance by ensuring continuous industrial peace in the country? Would the unions he registered while carrying out his statutory responsibilities ever be functional, and become an achievement to reckon with? Would the many achievements of President Buhari‘s administration lead to progress in Nigeria of today and in future , or would they die prematurely?

In the inspiring words of Prof. Mohammed Mustapha Akanbi of the University of Ilorin. “It is important to differentiate policy, programs and statutory responsibility from achievement. There are objectives of a policy, program or statutory responsibility as the case may be. And until the objectives of which ever, is functional and impact-fully meeting the need or purpose it exists for, you cannot say you have achieved anything.

The problem in Nigeria is that government celebrates what should not be regarded as achievement, and the press help them to publicize and make it look like real achievement. So, government should allow their policies to start working, that is, become functional and meeting the need thereof, before they start celebrating and regarding them as achievement. On the other hand, the press must cease from allowing government use them as praise-singers of policies and achievements. The reverse should rather be the case.