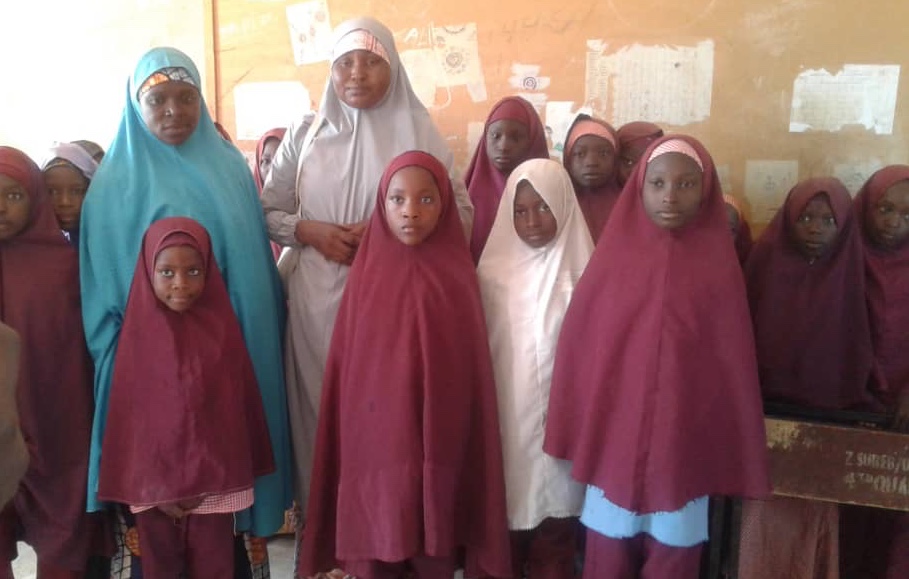 When SBMC was first rolled out in Warure Special Primary School in 2012, a good number of individuals who heard about the scheme had thought it was another government programme that would head on the rocks.

The school is located in an area where thousands of out-of-school children wander on the streets every day, despite the existence of a Universal Basic Education law that promises a free and compulsory education for every child of school age.

Warure Special Primary School’s earlier inability to attract the required number of children despite parading some relatively good structures was said to have rooted on several factors that range from poverty to age-long norms that detest western education.

But the coming into force of the primary school’s SBMC is now turning the tide against poor enrolment as women are now at the forefront in championing the education of their children in the area.

44 years old Samatu Yunus was one of the residents in the area with little or no interest for education of her children nor those in her neighbourhood. Today, she is an active promoter of education in the community following an interface with mothers associations of Warure Primary School’s SBMC.

“As members of mothers association, we normally go round telling parents and guardians the importance of enrolling their children in school and we have convinced many people that education is not a bad thing but something that will give them a better future,” Samatu said.

According to the mother of five, the introduction of SBMC is paying off as it is not only drawing hundreds of kids to school but is also serving as a platform to galvanise support for girl-child education in the region.

“All my children including the girls are now in school because I now know the importance of education and I am also encouraging others to do same,” she said.

Another woman, who also shared her views on SBMC during a UNICEF facilitated media dialogue on the scheme in Kano State, said the enlistment of mothers to woo children to school is already becoming a game changer as mothers can easily alter the mindset of their kids by giving them example of individuals who are successful in the society because of education.

“When children imagine themselves holding leadership position in the future, they might question why anybody would stop them from going to school,” Hadiza Sadiq said.

According to her, the key is to portray them as relatable and to highlight how they became educated despite being vast in Quranic/Islamic knowledge, thereby making it easier for children to envision themselves following a similar path to success.

SBMC- a body made up of representatives of religious and community leaders, pupils, women associations, artisans, among others, was introduced by the Federal Government in 2005 in selected schools to help complement government efforts in ensuring good basic education delivery through community participation.

The scheme, which has now gained momentum in some states following the support of the United Kingdom’s Department for International Development (DFID) through UNICEF Nigeria, has seen to massive increase in enrolment in several schools.

The activities of mothers association, a major component of SBMC is not only winning new pupils for Warure Primary School but the same feat is being replicated in 4,500 primary schools where the scheme is operational in Kano State.

Head teacher of Warure Primary School, Mr Yusi Dandago, who testified to the positive impact of SBMC, commended UNICEF and DFID for their support for the initiative.

“The school SBMC was established in 2012 with the support of DFID’s Education Sector Support Programme in Nigeria (ESSPIN) and its members were trained. We also received support which includes grants for the development of the school.

“Some of the developmental projects include re-admittance of dropped out pupils and we provided them with uniforms and writing materials, renovation of classrooms, provision of mechanized borehole, erection of additional fence and head’s teacher’s toilets and many more,” he said.

The Kano State SBMC Chairman, Mr Tijjani Baraya expressed delight that the scheme has successfully acted as a bridge between schools and communities, adding that aside attracting more children to school it has also helped in boosting school facilities.

“SBMCs in Kano mobilized resources towards supporting school improvement programmes. For example, SBMC of Batta Model Primary School, Danbatta advocated to an old pupil for the school expansion to accommodate increased enrolment of pupils in the school.

“The old pupil made vertical expansion of 8 blocks of 16 classrooms and supplied 25 desktop computers and 100 tablets to the school.