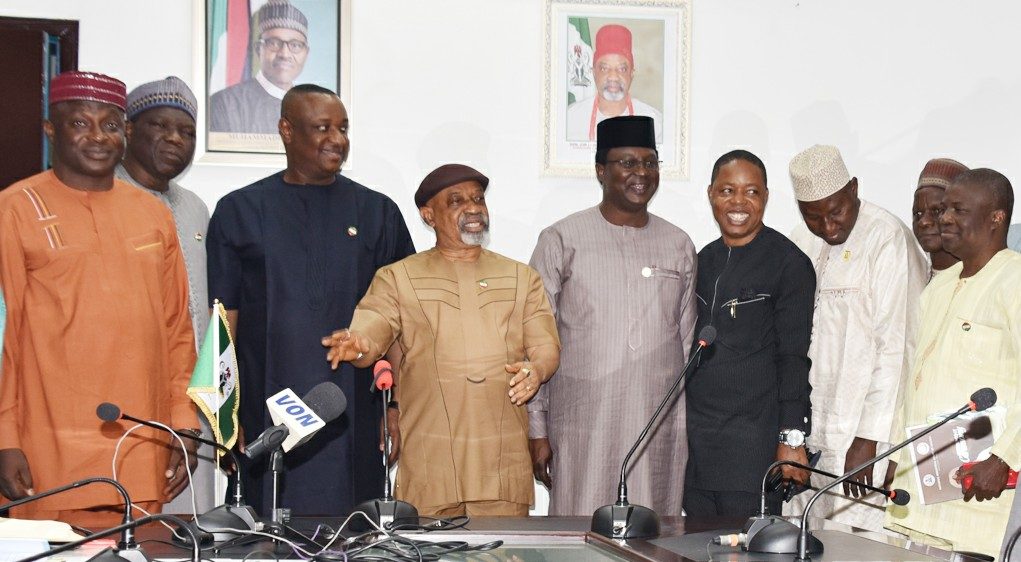 The Minister of Labour and Employment Sen. Chris Ngige, has emphasized the constitutional responsibility of his ministry in regards to registering new and regrouping labour unions, saying that the Ministry will exercise its functions when the need arises.

Ngige stated this in response to a concern presented to him by the president of the Nigeria Labour Congress (NLC) Comarde Ayuba Wabba, who led a delegation of NLC leadership on a solidarity visit to him on his reappointment as the minister of labour and employment.

Wabba, in his remarks expressed concern that some unrecognized groups of people came to him portraying themselves to be registered unions but ran away when he abasked them to bring their members and certificates of registration. He therefore urged the minister to ensure that the ministry will not register every Dick, Tom and Harry that come in the name of unionizing, especially when the constitution is against such.

Responding to NLC president’s prayers which includes the future of work (decent jobs), casualization of workers in private sector, institutionalization of social dialogue forum for industrial harmony and peace, registration of new unions and the new minimum wage, Ngige said that neither him nor the ministry has registered such persons, though he had earlier proposed to register a group of barbers that came to him seeking to be registered as employers’ association.

However , he categorically stated that it is within the constitutional powers of the Ministry and part of its statutory function to register or regroup ‘amorphous’ unions.

“We are not oblivious of that fact that the laws of the land permits this ministry to exercise some elastic movement, because nothing is static in life. You will not say that new unions will not come up, they must come. Because there are going to be new unionisation in places, especially those who didn’t want to unionise before against the conventions.

“So once those people unionise and they are not in a trade or cadre that are unionised before, we register them. It is our function to do so, it is within our powers. It is also within our powers to regroup. If a union is amorphous. I belong to a union, the Nigeria Union of Pensioners as a civil servant. So we will exercise our functions.”

On role of the Advisory Council on labour matters which NLC is a member, the Minister said, “The council cannot take over the powers and functions of the Ministry of labour and employment or the Minister, no, it is not possible.

“The law of the country doesn’t say that. We will only bring our functions to you for advice at the national level of advisory council. And We will bring it there, and we look at it and we tell you what we are doing. But we must be on the part of the law. Due process, that is what we are after. The council it is a tripartite council and cannot strip us off our right.”