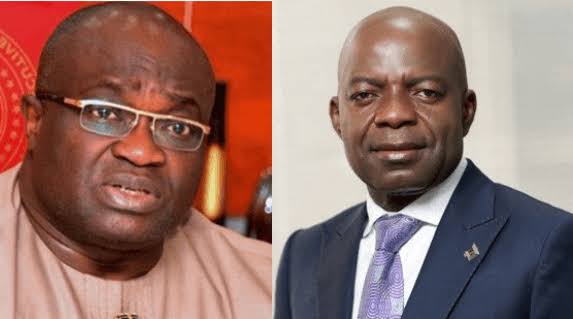 Since the Governorship Election Petition Tribunal sitting in Umuahia, Abia State, dismissed the petition of the serially defeated All Progressives Grand Alliance (APGA) candidate in the March 9, 2019 election, many in the state and beyond have asked a poignant question: what does Alex Otti really want?

As a citizen of Abia state, permit me to answer that question thus. In the Scripture, precisely the Book of John Chapter 10 verse 10, our Lord Jesus Christ defined his mission on earth and that of the devil thus: “The thief (Satan) comes only to steal and kill and destroy; I have come that they may have life, and have it to the full” (NIV).

So based on verifiable facts, my candid opinion is that Alex Otti is on a mission to disrupt governance in Abia State, punish Abians for not voting for him in 2 consecutive elections by doing his best to distract Governor Ikpeazu from working for the state, just to make himself politically relevant.

It is no longer news that since Otti lost in 2015, he has continued to do everything in his book of political mischiefmaking to disrupt governance in Abia State, including hiring professional propagandists to needlessly attack Governor Ikpeazu and Abia State.

For instance, when Governor Ikpeazu arranged for a $200m African Development Bank (AfDB) facility that would help the state fund the construction of 500km new roads, Otti did not only fund media propaganda against the availment of the facility to the state, he went to the National Assembly and the Federal Ministry of Finance in Abuja, to frustrate the approval of the facility. When his efforts failed, he reportedly traveled to the headquarters of AfDB in Cote D’Ivoire to further push against the facility after writing multiple petitions to whoever has something to do with the bank.

For the records, Abia state was not the only state offered similar facility. Unfortunately, while 10 other states benefited, Abia didn’t All the other states had defeated Governorship candidates, but it was only Abia’s Otti that raised needless dust even when Abia was the least borrowed among the benefiting states.

If Abia State Government had received that needed support in 2017, like Anambra State did under Peter Obi, not only would the state have been able to improve its road infrastructure capital, much needed funds would have been freed up to pay outstanding pensions and gratuities dating back to military government era to date. Even distressed state parastatals such as Abia State Polytechnic, Aba, and Abia State College of Education (Technical) Arochukwu would have benefited from needed financial intervention by the Ikpeazu administration.

Alas, the facility is yet to be availed to Abia State and during the 2019 round of election campaigns, Otti simply campaigned on the sufferings of state pensioners and infrastructure deficit in the state. He went as far as launching his campaign at Ngwa High School, Aba, by propping up frail pensioners as campaign tools while lying to the rest of the world that Governor Ikpeazu has done nothing about road infrastructure and regular salary payment even when civil servants working with state ministries, departments and agencies were up to date with salary payment.

Indeed it took a Channels Television anchor to remind Otti that Governor Ikpeazu invited media practitioners, including the anchor, to come and see the over 70 roads he reconstructed in the state. A visibly shaken Otti insisted that “Ikpeazu has done nothing” until he returned to Abia to face voters in a debate with the Governor where he reluctantly admitted that he “personally counted only 59 roads done by the Governor”.

Many concerned observers of Abia politics must have wondered the source of orchestrated bad press against Abia State since 2015 even when many know that Governor Ikpeazu has obviously done a lot of good things in the state.

In his desperate bid to become Governor of the state, Otti permanently hired propagandists who daily churn out outright falsehood against the state and her people.

Otti’s attempt to distract the Governor is legendary but thankfully, evidence on the ground shows that at best he has had limited success as Governor Ikpeazu has continued to push his 5 point development agenda anchored around education, agriculture, SME development, Industrialization and oil & gas development.

To the chagrin of Otti who would never stop wishing the worse for the State, Abia has maintained first position in performance ranking for West Africa School Certificate Examinations, back to back, for 4 years, grown public school enrollment from 142,000 to more than 650,000 students, constructed more than 359 new classroom blocks, four model schools and retrained Abia teachers using local and international education service providers.

In agriculture, Abia is the only state in Nigeria to plant more than four million tenera specie palm seedlings, and just recently, Governor Ikpeazu delivered more than N2bn worth of new improved rice seedlings to Abia rice farmers and constructed 4 new rice mills. He has long changed focus to support the setting up of an Agro-Industrial cluster at Ubani-Ibeku for the processing of cassava, rice and oil palm products.

Under the watch of Governor Ikpeazu, Golden Guinea breweries that Otti described as “moribund” during the elections is back in production while the first ever automated shoe making factory is set to be unveiled in Aba. The state is also benefiting from a $1.8bn Foreign Direct Investment, making it the 3rd highest beneficiary in Nigeria as at the 3rd quarter of 2018.

Since Governor Ikpeazu who has never hidden his desire to work with the federal government and multilateral development finance institutions to accelerate the development of the state, announced the corroborative efforts with the private sector and federal government to launch Enyimba Economic City, Otti has gone to work to discredit the project which has potential to deliver more than 700,000 jobs to Abians within 10 years.

Not many know that recently a petition was sponsored and sent to the Presidency to the effect that the counterpart fund of N20bn provided by the federal government in lieu of their 20% share in Enyimba Economic City has been looted by those promoting the project in league with the Government of Dr Ikpeazu. Governor Ikpeazu had to visit the President to point out that the money is still with the Central Bank of Nigeria and, hence, could not have been looted.

It is no secret that Otti believes that whatever is not done by him is bad for the state or any organization he is associated with. That is why his former employers at Diamond Bank lost all their investment for daring to shunt Otti aside thereby compelling him to resign and join partisan politics to the detriment of Abia State and her people.

In the last governorship election in Abia, Otti came a distant third; having polled 64,366 votes as against Governor Ikpeazu/PDP who polled 261,127 votes and Uche Ogah/APC who polled 99,574 votes. Yet, Otti went to the tribunal and asked the court to cancel results in 15 LGAs where he lost but uphold the two he marginally won. That Otti expects to win Arochukwu his home LGA while Governor Ikpeazu should lose Obingwa and Uche Ogah must have lost in Isuikwuato is the kind of mindset that only men with symptoms of exaggerated messianic complex have.

Meanwhile, for Otti to even canvass a cancellation and repeat of the most peaceful election that more than 400,000 Abians vote in, is a statement in gross disrespect for the people whom Otti wishes to punish for not voting for him.

Throughout the campaigns, Otti’s campaign rhetoric was full of anger and bile. From his assertion in Lagos that he was coming to Abia with blood shot “red eyes” to his “enough is enough” campaign message, Otti obviously wanted to incite violence with a view to benefiting from it.

When on election day the state experienced the most peaceful election in Nigeria, Otti quickly hoodwinked the APC candidate, Uche Ogah, to show up with him for a press conference to call for cancellation and repeat of the election. Those present during the press conference he called figured his tricks and reported that it was all about Otti.

While Governor Ikpeazu has offered his hand of fellowship to Otti, after the tribunal ruling, nobody should be deceived into believing that Otti will accept it and work with the Governor to positively advance the Abia project. Otti will appeal the tribunal ruling simply to remain politically relevant. He as usual find a platform to disrupt governance in Abia and distract Governor Ikpeazu from doing the work he was elected to do. Unless the Governor will accept to step down for Otti, the self acclaimed messiah will not stop to pursuing his disruptive mission.

In all these, Otti will never consider the interest of Abians. He wants Abia and her Government to fail as a punishment to those who refused to vote for him. But I am confident that the state will continue to make progress under the watch of Governor Ikpeazu who acknowledges that while his administration has done a lot of good things, there is still much more work that must be done.

With God on his side, Governor Ikpeazu will certainly succeed in changing the Abia narrative for the better notwithstanding the shenanigans of characters like Otti.