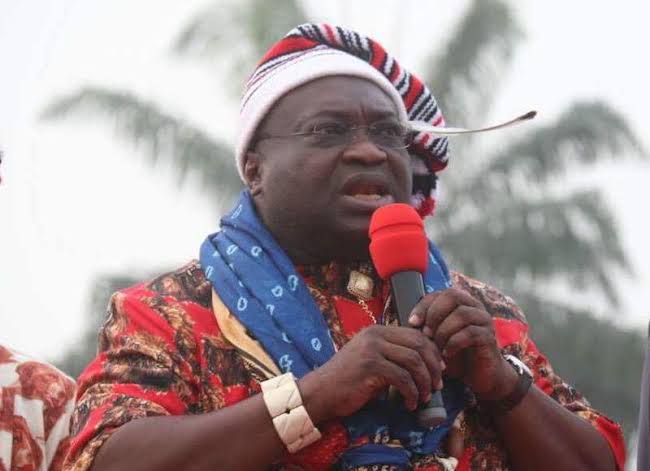 Abia State Governor, Dr. Okezie Ikpeazu, has entreated the Nigerian Consul-General in Atlanta United States, Mrs. Aishatu Musa, to protect Nigerians resident in Atlanta from negative stereotyping that May arise as a result of activities of some individuals in the community.

According to a statement by Special Adviser to the Governor on Communication, Mr Sam Hart, Ikpeazu, who gave the charge when he received the Consul-General who had come to welcome him to Atlanta, noted that the criminal activities of some Nigerians in the US, does not in any way represent the true Image of Nigerian population in the diaspora who have continued to excel admirably in their chosen endeavours.

Governor Ikpeazu went on to give instances of Nigerians who are breaking academic records in American Universities and those who have been elected into political offices in different states as ideal role models whose stories should be promoted above the few who are involved in untoward activities.

He noted that Atlanta at its early stages of development, positioned itself as the destination of choice for hosting large cooperations by being one of the first cities in America to provide reliable power which led to the citing of the headquarters of global cooperations in State. He then hinted that he is modeling Abia State after Atlanta by providing the enabling environment for industries to move to the State, citing the example of the Enyimba Economic City.

Earlier in her remarks earlier, the Consul-General welcomed the Governor to Atlanta and assured him of her availability to interface between American companies willing to invest in Abia State and the Abia State Government.

Present at the meeting was the Special Adviser to the Governor on Diaspora Affairs, Dr. Mrs. Ngozi Ogbonna-Erondu, Commissioner Nominees, Dr. Solomon Ogunji and Dr. Joe Osuji and other officials of the Nigerian Consulate in Atlanta.

In the same vein, Dr. Okezie Ikpeazu, has commended members of Ngwa National Association of United States of America and and Abians in the diaspora for their constant contributions in diverse forms to the development of Abia State.

The Governor who was the Special Guest of Honour at the 28th Annual Convention of the Ngwa National Association of United States of America which held in Atlanta, Georgia USA, extol members of the association especially for the invaluable Containers of Critical Medical Equipment and supplies they send periodically to Abia State, and urged them not to relent in thinking about how they can continue to contribute to the development of Abia.

Governor Ikpeazu also assured them of the commitment of his administration to comprehensive infrastructural development in Abia State and urged them to be good ambassadors of the State in all their endeavours.

Earlier in his welcome address, the President of Ngwa National Association of USA, Chief Innocent Abakwue, praised the Governor for honouring their invitation and noted that regular interface between the Governor and Abians in the Diaspora was important to bridge information gaps and keep the people informed about developments back home.