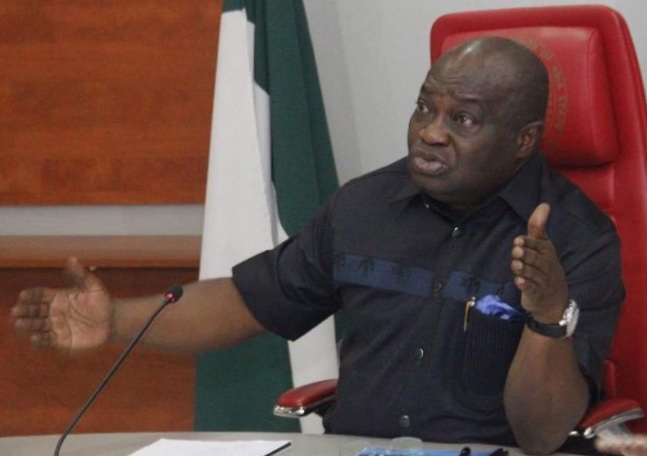 In what seems to be a move to ensuring that all roads constructed across Abia State by his government are standardly done to the tune of prescribed longevity, the Governor of Abia State Dr Okezie Ikpeazu, has reordered an indigenous construction firm; Tunnelend Construction Company to go and undertake a full reconstruction of the Unuaro/Ekwereazu Road in his local government Area (Obingwa).

Seem to be poorly constructed, the road which was completed in December 2018, started dilapidating in June 2019 and has worsened. It has also been revealed that the construction firm, Tunelend, is owned by Engr Enyinnaya Nwafor, son of former late deputy governor of the state, Dr Chima Nwafor.

Speaking on a live radio program on Magic 102.9 fm Aba, Governor Ikpeazu, who was angry over the poor construction done on the road, which is currently the only motor-able route from Aba to Akwa Ibom and Cross Rivers states, due to complete failure of all federal roads linking the states, said that the poor work on the Ekwereazu road didn’t meet the standard of roads done by his administration.

“Yes I have received calls and complains about the poor construction on the road. I have ordered the contractor to return to site and ensure a complete reconstruction of the road. Ministry of Works will monitor what they are doing to ensure that the standard in terms of the roads that our administration is known for, is maintained.

“I am not happy about the poor job done by the contractor. There is no way we will accept that a road done by this administration failed less then on year after construction. Unfortunately, we have not commissioned the road, so the must reconstruct the road”. Ikpeazu said.

Governor Ikpeazu reiterate that his philosophy of road construction is that it is better to build few but durable roads than multiple roads that fail before they are commissioned.

Insisting why the Ekwereazu road must be reconstructed, Governor Ikpeazu said: ” I don’t believe in palliatives; it’s either I do it and do it well or leave it. I want Abia to remember me as a man who did not do all the roads, but who the few ones he did have refused to fail.”

There has been public outcry over the poor construction on the road which was constructed in 2018, and failed before June 2019.

Governor Ikpeazu has promised to complete ongoing projects awarded in the first term of his administration in his second term.

He said: “Since our assumption of office for a second term, we have taken steps to consolidate on the successes we recorded in our first term while ensuring that we finish strongly, our second and last lap. Out cardinal objective in our second term is the completion of all the projects that we began in our first term, while laying solid foundations for sustainable job creation for our youths.”