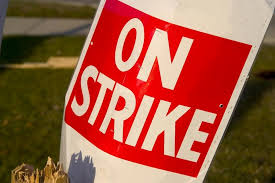 The Joint Action Committee (JAC) of the Non Academic Staff Union of Universities and Educational institutions (NASU) and the Senior Staff Association of Nigerian Universities (SSANU), have made a demand of N30bn from the federal government for the for payment of the non-teaching staff of higher institutions.

JAC also called on President Muhammedu Buhari-led government to take advantage of its warnings and expedite actions in addressing the issues raised by its leadership in order to avoid the imminent mother of all strikes in the university sector.

Explaining again to journalists in Abuja why they went on 5 day warning strike, Comrade Solomon Alfa, Vice National President/ Zonal Chairman SSANU, noted in a statement made available to TheLabour; that the federal government intentionally discriminated against the non teaching staff of universities in Nigeria, which he said was among other things the reason for the five days warning strike.

“It will be recalled that the Joint Action Committee (JAC) of NASU and SSANU embarked on a 5-days warning strike on 18th August, 2019 over the refusal of the Federal Government to implement the 2009 Agreements it signed with the Unions.

“Among the issues that necessitated the strike include: Discriminatory payment of arrears of Earned Allowances being owed our members, The non-implementation of the December 5, 2016 judgment of the National Industrial Court on University Staff Schools, Renegotiation of the 2009 FGN/University staff Unions Agreements.

“It is imperative to shed more light on the issues that prompted the warning strike so that the public and the good people of our dear country Nigeria can be well informed and be able to prevail on the government to do the needful in order to avoid the mother of all strikes.” He said.

Giving an in-depth explanation to the cause of their agitation, the statement stated; “In 2013, the Federal Government released the first tranche of the arrears of Earned Allowances amounting to Thirty Billion Naira (N30bn) for payment to Federal Universities and Inter-University Centres workers. This money was released to the various Governing Councils for disbursement to the workers.

“However, in 2017, the second tranche of N23Bn was disbursed to the Universities in a very strange manner that is totally alien to any known accounting principle and best practices. The sum of N18.4 billion (89%) was allocated to the teaching staff (ASUU), while the Non-teaching staff Unions were allocated a paltry N4.6 billion (11%).

“The Inter-University Centres and the recently established Federal Universities were excluded. This discriminatory practice by the Federal Government was strongly criticized by the non-teaching staff with protests and strikes. Government promised that this action would never be repeated.

“Contrary to its promise, the sum of N25Bn was approved and disbursed to Federal Universities in 2019 with N2OBn(80%) of the sum again allocated to the teaching staff (ASUU) while only N5bn (20%) to the entire non teaching staff. This time, the Inter-University Centres were again excluded in the disbursement.

“This repeated discriminatory practice by government of the day in favour of ASUU and against the non-teaching staff is not only worrisome but has portrayed the present government as bias as well as causing divide and rule, capable of creating disharmony in the system as an avenue to crumble and/ or kill the University education system.

“Therefore, the JAC of SSANU and NASU is calling on all Nigerians to condemn this act of government with a view to correcting itself.

“Consequently, JAC is demanding the sum of N30bn (Thirty Billion Naira) from the FG for payment to the non-teaching staff in order to close the gap it created by the discriminatory allocations. Thereafter, JAC expects that government will not allow such dichotomy to raise its ugly head in the system any longer as it defrays the balance.”