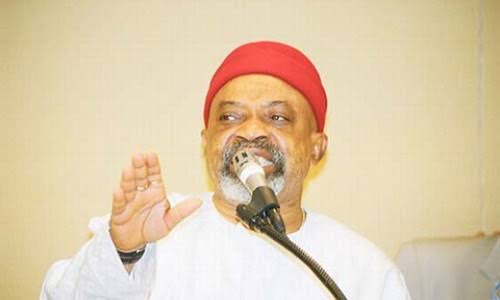 The reappointed Minister of Labour and Employment, Sen. Chris Ngige, has said that his first call of action is to address the ongoing nationwide warning strike by university workers, and also to resolves all issues concerning  the new minimum wage.

The Non Academic Staff Union of Universities and Educational institutions (NASU) and the Senior Staff Association of Nigerian Universities (SSANU), on Monday embarked on a 5 day nationwide strike over the failure of the federal government to meet its demands.

He noted that he spent his first tenure as labour minister putting in all his energy to ensure he makes a positive impact in the labour sector, saying, “Labour and employers, I don’t think they have had it so good I put in all my energy in what ever assignment I am given and I did so in the ministry of labour in the last three and half years.”

“We are bringing first experience, we have been there for 3 and half years. Going back there doesn’t mean we will go back there and sleep or we should be doing merry, we have so many outstanding issues to be addressed some of them urgently.

“As we speak NASU, SSANU the JAC they are on strike and universities system is now bubbling, going comatose so we have to address that issue urgently.

“The issue of minimum wage consequential adjustment my permanent secretary is handling it and they have made some progress by tomorrow we will get the notes from him and I and the minister of state will know how to queue in but the most important thing is that we want to make sure that matter is addressed and as quickly as possible so we can put smiles on the faces of Nigerian workers.”

Ngige who maintained that his values as a man of due process was still intact, expressed commitment towards engaging with all labour unions in moving the sector and the interests of Nigerian workers forward.

“I remain committed to working with the labour unions, the NLC is a federation of some labour unions you have other federations; we have the Trade Union Congress, we also have United Labour Congress which has not been officially registered but there are some unions that are there.

“We have about 18 unions there the only reason why we have not registered them is because the unions are not brand new and the law says you must have 12 brand new unions but they are working so I am committed to working with the labour unions and labour federations,” he added.