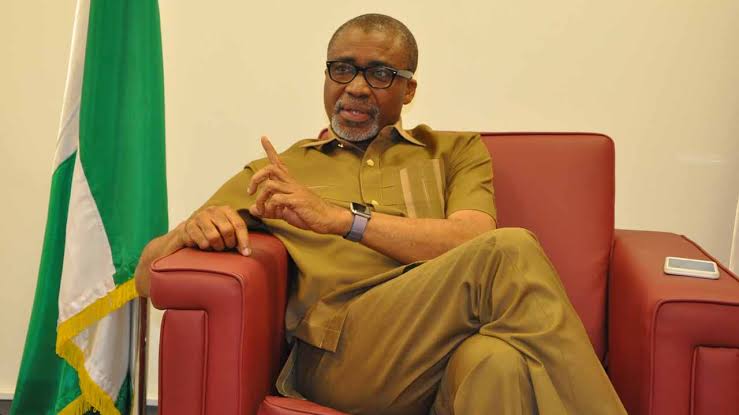 Senate Minority leader, Senator Enyinnaya Abaribe has vowed to pursue and mobilize national and international pressure to ensure justice is done for the family of the slain Okada rider, Mr Chimaobi Nworgu in Aba penultimate week by a killer soldier, Corporal Ajayi Johnson.

Abaribe spoke when he visited the family and the actual crime scene in Umuokereke Ngwa in Obingwa local government council of Abia State on Monday.

Moved by the pitiable site of the traumatised widow of the brutally executed young man, Abaribe vowed that he will ensure that the killer of Chimaobi is brought to justice and pay for his crime.

He wondered how a Nigerian soldier who was detailed to man a checkpoint in Aba for the protection of the people, will wilfully with a wicked and sinister motive kidnap another ‘Okada rider’ to chase chimaobi for over five kilometres to kill him right in his village “in the heartland of Ngwa land”, for just N100 bribe”.

“It is an embarrassment to the country, to the Nigerian Army and an insult to our people. We cannot condone this any further. I will surely bring this heinous crime by the said Corporal Ajayi to both national and international attention. Nobody can sweep this under the carpet”, he said.

The ranking Senator however said he was encouraged by the fact that the Nigerian Army has taking responsibility and confirmed that Chimaobi was indeed murdered by one of their own, Corporal Ajayi Johnson.

“That means that the case is clear and we now expect a quick dispensation of Justice. I have confidence in the military, particularly the army for their discipline and acknowledged fortrightness in handling issues that tend to smear Military/Civilians relation.

“My people are in pains, they are now living in fears over the brutality of the soldiers who statutorily are empowered to protect the people. It shouldn’t be so. I am appealing to the authorities to put a stop to this. I will definitely not rest until this is stopped and the killer of Chimaobi faces the punishment for his crime”, Abaribe said.

Continuing, the lawmaker decried the security situation in the country and wondered why the Military would be enmeshed in the ugly mix, with emphasis to the nauseating killing of some police officers in Taraba by some soldiers.

“It is not a good narrative, that our own soldiers, once our pride in the international defence community will now become a recurring decimal in the extra judicial murder of our citizens. No it shouldn’t be so”, he added.

Meanwhile, Senator Abaribe cautioned the youths not to take the laws into their hands but to remain calm, promising to table this matter on the floor of the Senate for national input, even as he assured to interface with the military headquarters until the killer of Chimaobi faces the music.