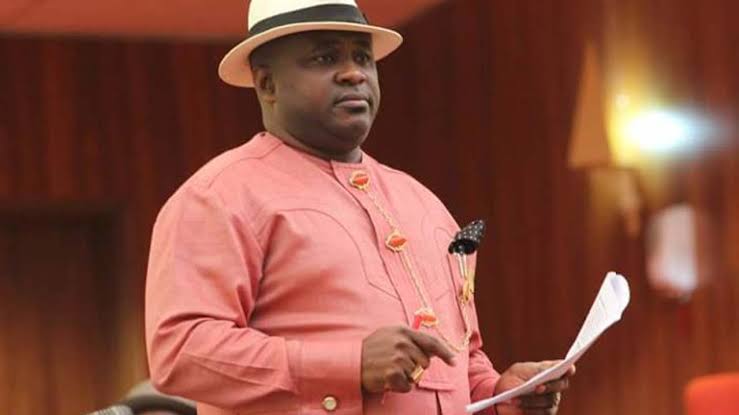 Akpan who represents Akwa Ibom North-East Senatorial district on the platform of the PDP has been seen lately championing some of the development policies of our great party, the APC, for personal ulterior motives, the group claimed.
In a statement issued on Sunday in Abuja, Comrade Mike George, National Coordinator, APC Success Movement, said the attempt by Senator Akpan to disrupt the confirmation of Senator Godswill Akpabio as a member of Buhari’s cabinet.

The statement issued by the nation Cordinator Comrade Mike George, followed purported media reports that Mr Bassey Akpan attempted to speak in support of Mr President nomination of Akpabio through a failed ‘Point of Order even after the Minority Leader of the Senate, Senator Eyinaya Abaribe had spoken copiously in support of Akpabio’s ministerial nomination.

“It is pertinent to note that the purported supporter of Senator Akpan of Mr President’s programmes, is nothing but a face-saving attempt to curry favours by a Senator who has penchant in fighting against President Buhari and the nomination of his people into federal appointments.

“Sometime in 2017 when Mr President appointed an indigene of Akwa Ibom North-East as a Resident Electoral Commissioner, Akpan having been so close to former Senate President Bukola Saraki, used his position to block the confirmation, thereby denying Akwa Ibom people that position for over two years. However, Akpan’s game-plan that he could replay the similar scenario under Lawan leadership met a brick wall.

“As usual, Akpan raised an infamous Point of Order which suffered a serious set back, as Akpan was ruled out of order. One wonders why such a blunder. “The recent change in attitude by Senator Albert Bassey Akpan by creating an impression that he is committed to the next level agenda of our great party (the APC), is vey laughable.

“Senator Akpan in collusion with the INEC, rigged the presidential, governorship Senatorial and house of Assembly polls against the APC. He played a similar role in the legislative elections at both the state and national levels.

“Apkan, displayed his crass ignorance of the rules of procedure at the Upper legislative chamber, when he raised the point of order during the Senator Godswill Akpan ministerial screening, after the Minority Leader of the Senate senator Eyinaya Abaribe had concluded his submissions on the matter, and the Senate had ruled on. Apkan’s action was in sharp contrast with the procedure of the Senate.

“However, curiously, the same architect of the horrendous fraud that was perpetrated against the APC, has suddenly turned around to mask as a promoter of our great party’s development programmes and policies.

Having failed to block Akpabio, Akpan has shamelessly turned himself into a megaphone of our party, when, in fact, his services are not need. We want him to face his plethora of cases with the Federal Government, particularly the criminal prosecution by the EFCC.

No wonder trying to curry favours from the federal government with a view to lobbying to have the slew of criminal charges hanging on his neck dropped.

Therefore, it is imperative to call on Senator Akpan to desist forthwith from further trying to portray himself as a friend of the APC, because there is no space him in our party.”