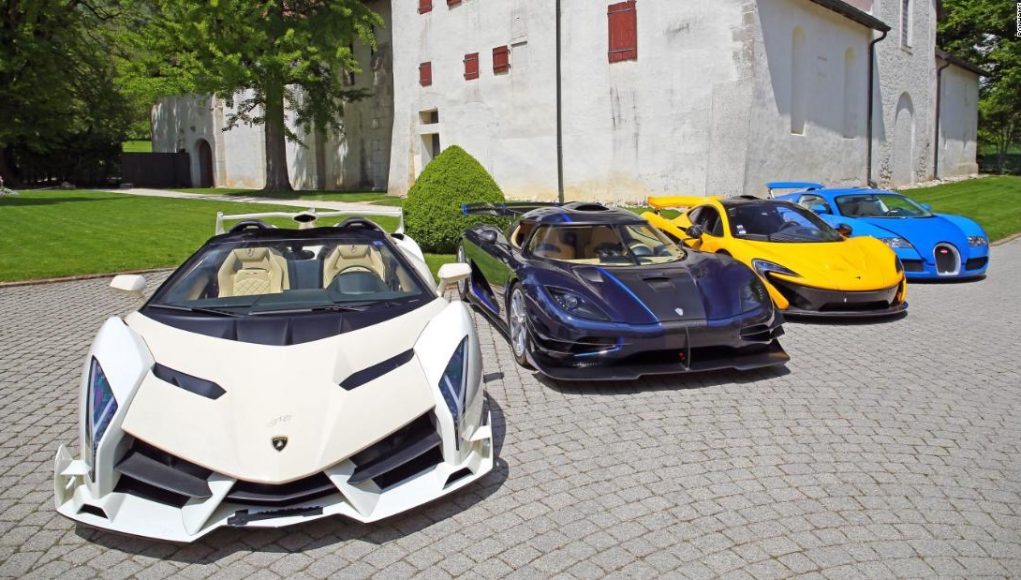 A collection of ultra-expensive supercars worth $13 million, seized from the extravagant vice president of Equatorial Guinea as part of a corruption probe, will be auctioned in Switzerland later this year.

Swiss authorities took the luxury stash of 11 vehicles from Teodoro Nguema Obiang Mangue, the son of the central African nation’s longtime leader, in 2016 after an investigation into money laundering.

Among the set is a roadster version of the Lamborghini Veneno adorned with the colors of the Italian flag — one of just nine produced to celebrate the manufacturer’s 50th anniversary — which has an eye-popping estimate of more than €4.5 million ($5.1 million).

A limited edition LaFerrari with an estimate of up to €2.5 million is also up for grabs, while a 1,300-horsepower Koenigsegg One: 1 of which just seven were ever produced, is expected to fetch up to €2 million.

Also in the collection are a McLaren P1, an Aston Martin One-77 and a Bugatti Veyron. None of the cars has racked up more than a few thousand miles. The ale organized by London-based auction house Bonhams, will take place in Geneva on September 29, this year.

Geneva police seized the fleet from a cargo area in the city’s airport in 2016 after criminal proceedings were opened against Obiang, whose expensive tastes have been the subject of probes by authorities in several countries.

He was handed a three-year suspended jail term for embezzlement by a French court in 2017, for
splurging on a Parisian mansion a private jet and the fleet of luxury cars with funds looted from his country.

Before that, Obiang agreed to $30 million settlement to resolve the US government’s allegations that he used money plundered from his country to amass assets such as a California mansion, a jet and a sizable collection
of Michael Jackson memorabilia — including the crystal-encrusted white glove from Jackson’s “Bad” world tour.

And last year, Brazilian authorities seized more than $16 million in cash and luxury watches from a delegation
traveling with Obiang, according to local media reports.
Obiang also owns a yacht named Ice, which reportedly costs about $800,000 a month to maintain, according to an article in the French Newspaper Le Monde.

His father, President of Equatorial Guinea Teodoro Obiang Nguema Mbasogo, seized power in a 1979 coup and is the longest-serving head of state on the continent. He appointed his son as his deputy in 2016.

The oil-rich country, one of the wealthiest in Africa, keeps a tight lid on information. For several years, anti-corruption NGO Transparency International described Equatorial Guinea as “too opaque to rank”, saying it could not get enough data on it for the global corruption index.