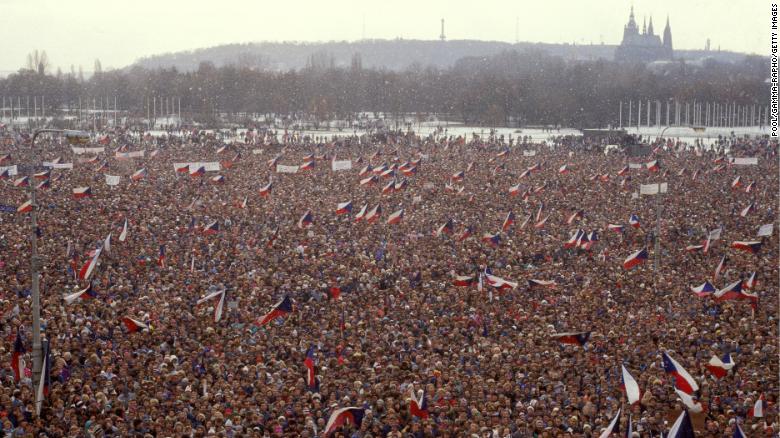 Citizens of Czech Republic, a country in Central Europe bordered by Germany to the west, Austria to the south, Slovakia to the east and Poland to the northeast, in their tens of thousands are gathering in the country’s capital city pack; Prague’s Letna Plain since Sunday, taking part in what many described as “the biggest protest since the fall of Communism.”

Estimated to be around 250,000 people taking part in the protest, the crowed took over Prague’s historical center, the site of the mass protests that ultimately led to the fall of the country’s Communist regime three decades ago, demanding the resignation of their Prime Minister Andrej Babis.

Andrej Babis, has been labeled a controversial politician, and he has also been accused of fraud in collaboration with his justice secretary Marie Benesova.

A billionaire before he became Czech Prime Minister, Babis has been nicknamed “Czech Trump” by some Czech media outlets because of his vast business empire and populist leanings.

Opposition parties in Czech have scheduled to pass a vote of no confidence on Wednesday. Series of speakers denounced Babis and called for his departure. Several speakers at the protest criticized Milos Zeman, the country’s president and called on their citizens to take steps to protect democracy.
Babis’ role in the European Union’s failure to agree a net zero carbon emission target was also mentioned by one of the speakers during the protest A plan to set the goal for 2050 was vetoed by four countries, including the Czech Republic, at a summit on Thursday.
But in response, Babis told Czech media on Sunday that while he respected people’s right to have an opinion, he didn’t understand the reasons behind the protests.
The demonstration was part of a series of anti-Babis protests that have been going on for weeks.
Babis has been accused of fraud related to EU subsidies received by his former agricultural business empire. An investigation ended in the police proposing criminal charges against him. Prosecutors are now deciding whether to indict the Prime Minister. He has denied the accusations.
Separately, the European Commission is investigating whether Babis had a conflict of interest because of his role as the PM and the owner of a major business receiving EU funding.

A draft report by the commission, leaked to Czech media earlier this month, said Babis’ business should not have access to EU funding, and suggested that the money it had received in the past might need to be returned by the Czech Republic.
The Commission said it would not comment on ongoing audits. The Czech Finance Ministry confirmed it had received a preliminary audit report, but would not comment further.
Babis rejected the allegations and said the audit was “an attack on the Czech Republic.” Apart from the resignations of Babis and Benesova, the protesters are also demanding that Babis’ business empire Agrofert stop receiving subsidies, tax breaks, investment incentives and public tenders.
In addition to being Prime Minister and an agricultural tycoon, Babis is also the owner of Mafra, a major Czech publishing house that owns two of the nation’s biggest daily newspapers. The protesters want to see him sell his stake in the media.
They are also asking lawmakers to push for new safeguards for the country’s justice system.
Babis is a divisive figure in the Czech Republic. The billionaire tycoon first stormed into Czech politics in 2012 and became Prime Minister in 2017. His populist ANO movement then received nearly 30% of the vote — almost three times more than the conservative party ODS that came in second.

Another Babis controversy relates to his alleged role as a secret agent for the Communist-era secret police, the StB. The Slovak-born politician was identified as an agent operating under the codename “Bures” by historians using archival documents.
Babis has rejected the claims and sued for defamation, but in 2018, a court in Slovakia dismissed his complaints, ruling that he was not wrongly identified as an agent in the archival documents.
“We think it unacceptable that … 29 years after the Velvet Revolution, an StB agent would be the Prime Minister of our country. We will not pretend that that is normal, we demand his resignation,” the organizers of the protests said.
Despite the controversies, Babis continues to be relatively popular among Czech voters. ANO was the clear winner in the recent European Parliament elections, securing 21% of the vote.
The organizers have already called for more protests.