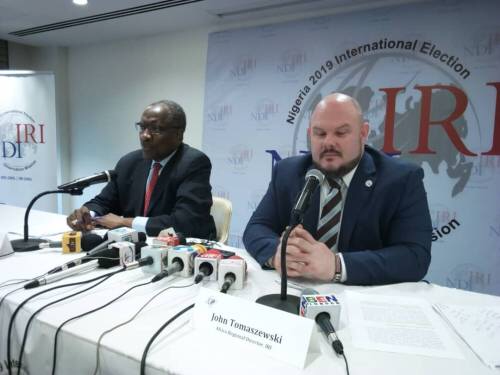 Nigeria’s Independent National Electoral Commission (INEC) has been praised for many reforms it introduced prior to the 2019 general elections by two United States based institutes; the International Republic Institute (IRI) and the National Democratic Institute (NDI).

The Institutes also enjoined Nigeria to pursue a comprehensive, inclusive and expeditious electoral reform process as well as establish time limit for the adjudication of pre-election petitions.

According to a report presented to the general public on Tuesday 18 June, 2019 in Abuja, by the due; who monitored Nigeria’s 2019 general elections, INEC must maximize and utilize its powers as an independent body with statutory responsible to conduct election to ensure that Nigeria enjoys freer and fairer elections moving forward.

The IRI/NDI report however blamed the political class, lack of internal democracies in political parties as well as security operatives for some of the challenges experienced during the general elections.

Furthermore, it stated that while INEC made arrangements for a credible poll, the political class deployed high-handed tactics, which includes vote buying, unguarded political statements and violence to undermine the process.

Moreso, the report commended INEC for introducing simultaneous voting, posting of results at polling units, improved voter-verification technologies and a more robust review and disciplinary process for INEC staff and enhancement of ballot secrecy as well as measures to reduce vote buying.

Meanwhile, it cited delay in release of election budget, failed attempt to reform the electoral legal framework and numerous pre-election disputes over political parties primaries which led to delay in printing of ballot papers as some of the challenges faced by INEC despite releasing it’s timetable one year before the election.

It further recommended improved coordination between security agencies and INEC and the provision of electoral security, enforce electoral law by investigating and prosecuting perpetrators of election-related criminal act.