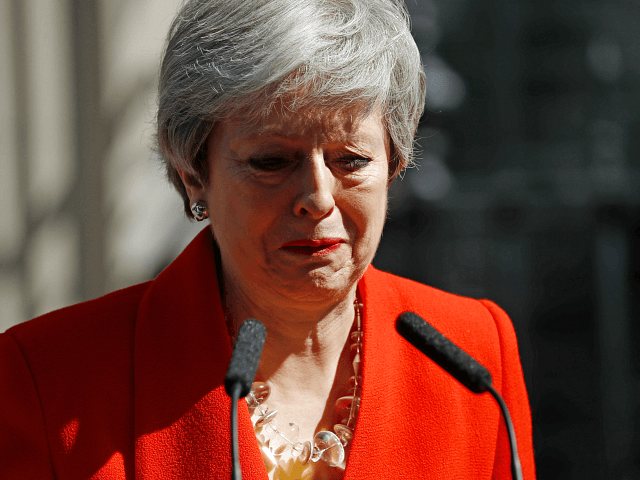 Theresa May broke down in tears as she bowed from pressure to her own party and announced she will stand down as prime minister within weeks.

In an emotionally-charged statement on the steps of 10 Downing Street, Ms May said she will resign as Conservative leader on June 7, but will remain as PM until her successor is chosen.

Watched by husband Philip, Ms May’s voice cracked as she said it had been “the honour of my life” to serve as PM and she felt “enormous and enduring gratitude to have had the opportunity to serve the country I love”.

In an apparent warning to the Conservative Party not to pursue a no-deal Brexit after she goes, she said her successor will need to pursue compromise to find a way of delivering the result of the 2016 referendum and taking the UK out of the EU in a way that protects jobs, security and the Union.

The contest to find a new Tory leader will begin in the week after her departure, and the victor will be announced before parliament breaks up for the summer in July.

The timing allows her to host US President Donald Trump’s state visit to the UK on June 3-5 and take part in commemorations of the 75th anniversary of D-Day in Portsmouth and Normandy before the race to replace her gets under way in earnest.

Some of the likely contenders for the succession were among the first to pay tribute to May. Boris Johnson hailed “a very dignified statement,” adding: “Thank you for your stoical service to our country and the Conservative Party. It is now time to follow her urgings: to come together and deliver Brexit.” Dominic Raab said: “Dignified as ever, Theresa May showed her integrity. She remains a dedicated public servant, patriot and loyal Conservative.”

But Labour leader Jeremy Corbyn said that Ms May had shown herself unable to govern and her administration had “utterly failed the country over Brexit and is unable to improve people’s lives”. He called for her successor to call an immediate general election.

Ms May’s dramatic announcement came after the chair of the Tories’ backbench 1922 Committee, Sir Graham Brady, met her in Downing Street to demand a timetable for her departure.

Standing at a lectern outside the famous black door to Number 10, Ms May said that as prime minister she had “done her best” to negotiate a deal to take the UK out of the European Union in a way that “protects jobs, security and our Union”.

But she added: “I have done everything I can to convince MPs to back that deal. Sadly I have not been able to do so.

“I tried three times. I believe it was right to persevere even when the odds against success seemed high.

“But it is now clear to me that it is in the best interests of the country for a new prime minister to lead that effort.”

Ms May said it was “a matter of deep regret” that she had not been able to deliver Brexit and warned that her successor will have to seek consensus across parliament to find a solution.

“Such a consensus can only be reached if those on all sides of the debate are willing to compromise,” she said.

Speaking a day after European elections in which the Conservatives are believed to have slumped to their worst performance in their history, Ms May insisted that the party “can renew itself in the years ahead”.

She cited progress in reducing the deficit, rising jobs figures, the introduction of an industrial strategy, house-building, funding for mental health, the race disparity audit and action to tackle plastic waste as the legacy of the “decent, moderate and patriotic” government which she led.

And her voice broke as she concluded: “Our politics may be under strain, but there is so much that is good about this country. So much to be proud of. So much to be optimistic about.

“I will shortly leave the job that it has been the honour of my life to hold – the second female Prime Minister but certainly not the last.

“I do so with no ill-will, but with enormous and enduring gratitude to have had the opportunity to serve the country I love.”

Shortly afterwards, she left Downing Street by car with Philip, apparently heading for her constituency home in Berkshire.

May’s widely-forecast departure came after a cabinet revolt against her latest Brexit plan, unveiled on Tuesday, which offered a set of concessions in the hope of winning a cross-party majority in the Commons.

The toxic detail which sealed her fate was the offer of a Commons vote on whether to hold a second Brexit referendum, with the promise that – if approved by MPs – no EU withdrawal settlement could be ratified without a Final Say ballot.

This sparked a wave of angry Tory MPs to withdraw their support, and a string of cabinet ministers to demand changes to the bill. Foreign secretary Jeremy Hunt delivered the final blow on Thursday by telling the PM to her face that she must kill the bill.

MPs in Westminster were already lining up behind rival candidates for the leadership. Would-be Tory leaders must first win their way through a series of MPs’ votes in June to get onto a shortlist of two.

The final pair of contenders will take part in a series of hustings around the UK before a ballot of the 125,000-strong party membership.

By holding on to her position until the summer, Ms May ensured that she will overtake Gordon Brown’s record of two years and 319 days in office next Wednesday, and is likely to pass the three-year mark as PM on July 13.