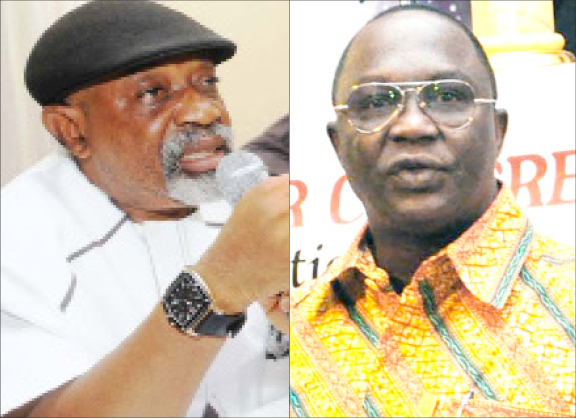 The Nigeria Labour Congress (NLC), has directed workers to attack and embarrass Sen. Chris Ngige, the Minister of Labour and Employment and family members any where seen.

NLC said the directive is prior to the attack on workers at the residence of the Minister on Wednesday by thugs.

Resolved to embark on a national protest on Monday in Abuja over the attack, the President of NLC, Comrade Ayuba Wabba, told journalists that the Central Working Committee (CWC) of NLC after its emergency meeting on Thursday in Abuja, has directed workers across airports in the country and in the 163 member countries of the International Trade Union Congress (ITUC), to disgrace Ngige and any member of his family once sighted.

“The CWC resolved to embark on a national protest on Monday May 13,2019 in Abuja against the victimisation of its members by Ngige and his thugs, and has accordingly directed all his members and civil society allies to commence immediate mobilisation.

“We are taken aback where a minister that is supposed to uphold our labour laws has decided to stoop so low. We are not surprised because we are told this is his antecedent as he has used thugs at various times even when he was in his own state.

“Clearly this has demonstrated why labour issues has not received the required attention it deserved. The CWC therefore resolve to hold Chris Ngige and his family personally responsible for the violence visited on the workers that were injured and we have also directed all our workers particularly at the airports in Nigeria and around the world that where ever he is seen he should also receive the same disgrace particularly in the diaspora where ITUC operates and in the 163 Countries where ITUC has members.

“At all the airports his name and identity has already been circulated and that the same disgrace be extended to him and members of his family,” he said.

Comrade Wabba also explain that the picketing of the ministers private residence was not illegal, but was undertaken as contained under labour laws.

He went on to say that even though the protest was carried out on a public thorough fare , any public officer holder was open to protests at their residence.

The workers therefore demanded an unreserved apology from the minister of Labour and the Federal Government, for unleashing hoodlums to attack the peaceful protesters, even as they demanded that the hoodlums be arrested and prosecuted.

“Apart from condemnation we demand full investigation of everybody that is involved. CWC demand an unconditional and unreserved apology from minister of labour Chris Ngige and by extension government, both for the primitive behavior of the the minister and his suspicious silence.

“The CWC cals for the arrest and prosecution of the thugs immediately and also their sponsors which is well known. Picketing of Ngige’s official residence and office is lawful as it was done along public thorough fare. He fenced his house and also the labour laws allows such picketing because he is a public officer holding public office.”