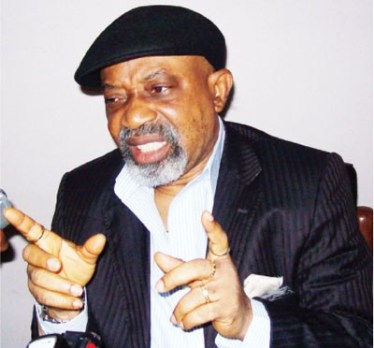 Thugs on Wednesday attacked members of the Nigeria Labour Congress (NLC) who were protesting at the Asokoro Abuja private residence of the Minister of Labour and Employment Sen. Chris Ngige, over the replacement of Chief Frank Kokori, who was initially appointed chairman board of Nigeria Social Insurance Trust Fund (NSITF) and was later replaced.

Members of NLC had earlier on Wednesday blocked the entrance to the Minister’s residence, protesting in regards to the replacement, calling on the Minister to cancel the replacement and immediately inaugurate the Fund’s board with Kokori as its chairman.

While the protest was ongoing, a group of thugs attacked the protesters with sticks and stones, and chased away both the protesting workers and journalists; saying that no one should carry out protest at the Minister’s private residence.

Following the attack incident, the NLC President Conrade Ayuba Wabba, has called on President Muhammadu Buhari, to urgently intervene on the issue, saying that the Labour Minister has disappointed Nigerian workers and that the attack on workers at his resident shows that he is against their interest.

Wabba, who said this when he addressed journalists after the incident, described the attack on workers as barbaric. Even as he told journalists that about 9 workers were injured during the attack, out of which two were in critically condition.

In his words, “The attack today where maximum force have been used upon workers is barbaric.

“Whereas workers went with bare hands, the thugs were carrying weapons and arms. And as I talk to you, we have nine people in the hospital apart from those that were slightly injured ”

“We are also going to decided a larger scale of action. He has no reason to be called Minister of Labour. He is a lord of his own and therefore instead of protecting us, he is against us.

“Because of this action, we have nothing to do with him and under the circumstance, except Mr President intervene. Workers are certainly going down-tune. That is why we are calling for a meeting of our central working committee tomorrow.

“We are here to demonstrate in his office also to show that we are not happy. Therefore Mr president must act on this immediately. Workers voted and supported him. Ngige cannot in any circumstance assume the power the president. That cannot be the case.” Wabba, added.

On the other hand, the president of National Union of Petroleum and Natural Gas (NUPENG) William Apkoreha, has alleged that two of his members got missing during the attacks on workers.

According to him, “We were embarking on peaceful protest when the thugs attacked us. Two of my members are missing now and I cannot fold my hands. We will maintain sanity until 12 midnight. If we did not hear a word from them, then every oil and gas worker in the country will enter the street to look for their members.” He added.