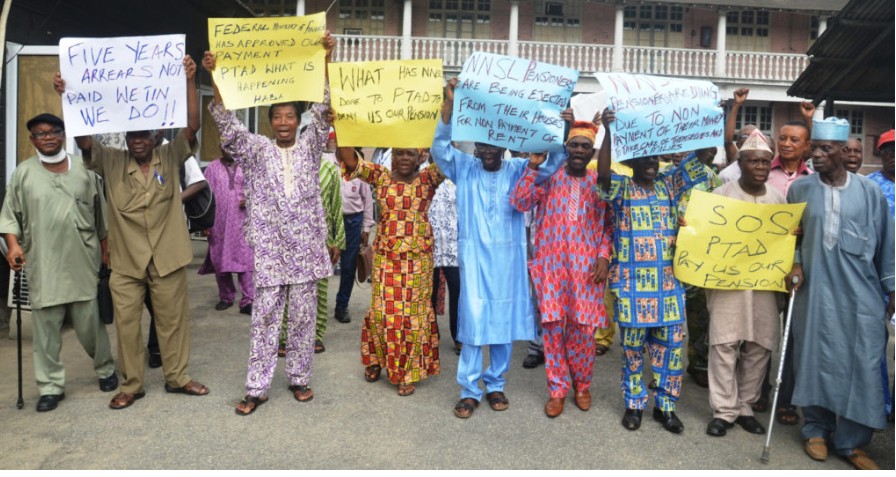 The story of federal and state pensioners in Nigeria has always been one characterized with unspeakable hardship. And like every other human socio-economic issue in Nigeria, it has unfortunately been a case of from bad to worse.
However, Mr Bunmi Ogunkolade, the Nigeria Union of Pensioners’ Spokesperson, in this interview with OBIOMA C. APPOLOS, made exciting revelations about the condition of federal pensioners since President Muhammadu Buhari, took office in 2015.

Pensioners’ Condition Under President Buhari’s Government Compared to Past Governments

It is incomparable in all ramifications. You cannot compare the condition of pensioners in this present administration to the past governments we have had since this fourth republic. In fact, pensioners have never had it so good as in the last three and half years of Buhari government. First, monthly pension has been paid as at when due since Buhari took over power in 2015 till this very moment we are talking.

No month goes by without pension been paid. Even when we were in recession, pensions were being paid regularly. Secondly, the past governments even when it was said that Nigeria was in season of surplus, owed pensioners 42months arrears. But despite the recession and low price of crude oil, Buhari‘s government started paying the 42 months pension arrears owed by the previous governments in six months intervals, while they also pay the regular monthly pension to pensioners.

So, pensioners have never had it so good in the history of Nigeria’s democratic government. This government has been so sincere and transparent with us, and there is no federal government pensioner that would hold a contrary opinion on this issue because the facts are out there.

Similarly, for 14years, pensioners of the liquidated Nigerian Airways by the past governments were owed pensions that ran into billions of naira. But just last December, the Buhari government set up a committee, invited the pensioners and it was ascertained that they were really owed.

After a deliberation on the exact amount, the government said it cannot pay the whole of the money because of funds constraint. However, the pensioners said their money was N75 billion while government said it was N45 billion. But thereafter they both agreed on N45 billion. The government has paid them N22.5 billion. I can confirm to you that they have collected the money from government, and with a firm promise of paying the balance as soon as possible. So, when we talk about pension issue now and the past, it is truly incomparable.

We are asking his new administration to through an executive bill, make it a law that pension should be on first line charge. This is because a new government may come tomorrow and pension will no longer be taken as a priority. So, if an executive bill for pension to be in the first line charge from the president goes to the National Assembly and it is passes through the required processes and becomes a statutory law, pension will be safe and pensioners will not have to suffer the indignity of neglect. This demand is a genuine one because in other climes, pensions are on the first line charge.

We are also asking the president to bring to being a minimum pension. We earlier expected that minimum pension would have been included in the new minimum wage bill, but it never did. We are demanding for this because there are pensioners whose monthly pension is as low as N3000. What can that meagre amount do for anybody in a country like Nigeria. This demand is constitutional because the constitution of Nigeria provides that pension must be reviewed every five years, just as minimum wage is reviewed. So we are demanding for a minimum pension of N30,000.

Is pension a right or compensation to retires?

Pension is a right. The constitution of the Federal Republic of Nigeria says so. This is because, if you have served your father’s land either for 20, 30 or more years, you deserve a pension. For using your youthful energy to serve your country, when you retire; it is a payback time from the country to you.

In Nigeria today, pension is under two bodies. Simply put, pension is divided into two segments in Nigeria. One is the Define Benefit Scheme and the other tone is the Contributory Pension Scheme.
The Define Benefit Scheme is the old system that we were using. It is legal and also constitutional. The define benefit scheme (DBS) is what is referred as the Pay As You Go system. That is, when you work for a certain number of years, you are entitled to some certain percentage of your earns before you retire. And the define benefit scheme is under the control or supervision of a body known as PTAD (Pension Transitional Administrative Directorate).

The Contributory Pension Scheme (CPS) on the other hand, is a new pension system that was established in 2004 through a Pension Act. It was established through an Act of Parliament in 2004. The Act; called Pension Reform Act was amended in 2014. But though established in 2004, the system took proper shape in 2007. When it started in 2004, the government gave 3 years leverage to retirees. Meaning that workers that retired from 2004 to 2007 were included in the old pension scheme (that is, DBS). But after 2007, every retiree thereon will be under the contributory pension scheme.

The contributory pension scheme simply means that every worker in service will contribute a certain percentage of their monthly salary into a coffer of the Pensions Funds Administrators (PFA), and the administrators were appointed and licensed by the government. According to its modus-operandi, every employee is required to pay 8% percentage of his or her salary while the employer will pay 12%, making it 20% of a worker’s salary, to the PFA in-charge of the worker’s pension. The money will remain with the PFA growing, until the workers’ retirement. And the idea is to make sure that a worker saves enough money with the PFA by the time of his/her retirement.

Importantly, the law has also stipulated a way to manage the pension funds. And the scheme is under the control or supervision of a body known as PENCOM (National Pension Commission). PENCOM regulates the activities of the various PFAs on how to administer the funds that is being kept in their custody. And one of the rules is that when a worker retires, a lump some of 25% of his/her total savings will be paid to him or her to start a new life, while the remain 75% will now be shared into monthly earnings that must be paid regularly.

So the difference between the old and new system is, while government pays the retiree who is under DBS, the retiree under CPS pays him or her self through the PFA.

Reason For The New Pension System

There are reasons given by government why the new pension system was initiated. Government gave two reason but we the pensioners added the third one. According to government, the nature and administration of the old pension system became too cumbersome. It became an avenue where corruption thrived; where the pension kept increasing as if no one died on the scheme. And because record keeping is a difficult task in Nigeria, corruption creped into the system and became so enormous. It got so bad that even when pensioners die, government would not be informed and money woild continue to be paid to the dead man’s account and somebody somewhere would be collecting it.

When government discovered the height of corruption in the system, it thought of this Chilean model. We were told that this new pension system is a prototype of Chilean pension system. Since pension has to do with the aged people and it is the responsibility of government to take care of them, it then decided that the Chilean model is the best for us in Nigeria.

The second is to keep pace with the modern world, that is, to think ahead of time. Since it is certain that once a person starts working either with a private or government agency, 20, 30 or 35 years after; the person will surely retire. So the idea of saving from when you are employed to the next 30 or 35 years, would yield some reasonable amount of millions. So that at retirement, the money saved would be more than enough to take care of you. And instead of waiting for government to make provisions for you which may come or may not come or rely on family members, your own savings will be more than enough to take care of you.

Another reason we the pensioners came up with it is that government doesn’t want to care for pensioners. It is like a parent that has a child; they trained and did every thing to make sure the child becomes successful, but when it is the child’s turn to take care of the aged parent, he or she starts giving excuses. So we strongly believe that the reason government came up with CPS is simply because it doesn’t want to be responsible to its citizens. And that is the reason according to our belief, why it put the burden of pension on workers.

Don’t forget that in Nigeria, everybody is a government. This is because you buy your land, build your house, provide electricity and water for yourself and even construct road for your self. And if you don’t do any of these, you can hardly live a good life in Nigeria. So, being that we have no choice, we then wholeheartedly welcome the contributory system. Considering the fact that it is fashioned to save us from endless verifications and other difficulties we go through just to access our pensions.